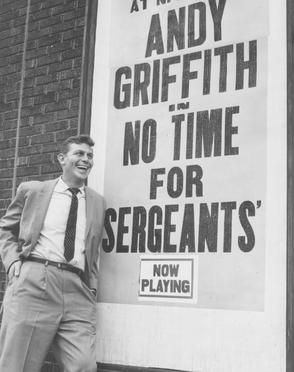 Given that I have not seen the theatrical version of No Time for Sergeants, let alone the original production, it is a bit hard to make full comparisons.  As such, I will use only the television and theatrical versions.

It seems downright bizarre to select one over the other given that Griffith originated the role of Private Will Stockdale on television, then moved it onto Broadway, before finishing up in the film version.  As such, he'd played Stockdale for so long he knew the role backwards and forwards.  Under those circumstances, you'd think there wouldn't be a need to select one.

I disagree.  In the 1955 version, Griffith made his Will Stockdale this naive innocent, well-meaning but essentially clueless about things.  In the 1958 version, his Stockdale did come across as more of an idiot, totally unaware of things.  Part of the problem, I think, is that first Griffith's role was expanded in the film.  In the television play, he truly didn't mean any harm whenever he did something that would inevitably end up causing Sergeant King headaches.  In the film version, he seemed oddly more aggressive, almost unwilling to understand how things worked.  The limited running time of the play didn't allow us to see Stockdale continuously make a mess of things, while the running time of the film did.

Another problem is that Griffith was 32 by the time the film version was made.  He looked a bit too old to be as naive as Stockdale was.  In 1955, he looked slightly younger than his 28-29 years, so it was plausible that Stockdale was a naive country boy.  By the time we got the film, he was looking much older than his 32 years, making the hick act look more implausible.

Finally, this might be a case where experience played a negative.  In 1955, Griffith was a near-total newcomer to the stage.  He had no real acting experience, having spent years as a monologist in nightclubs with his down-home style of comedy.  As such, he was fresh and eager, and that enthusiasm carried over into his characterization.  By 1958, he was an experienced actor, not just in No Time for Sergeants, but in the searing A Face in the Crowd, where he played against type as the villainous, power-mad/hungry 'Lonesome' Rhodes, under the experienced direction of Elia Kazan.  I could not shake the idea that some of the bitterness, the anger, the hypocrisy of Rhodes seeped a little into his metaphorical cousin, Stockdale.

It's interesting that McCormick, like Griffith, was recreating his stage performance for the big screen. As such, I figure McCormick's recorded performance was exactly like the one he performed on Broadway.  If that's the case, then I'll stick to Clark's version of our much put-upon Sergeant.  In Clark's version, there is a genuine growing sense of fear, anxiety, and horror as Stockdale made a mess of things, leaving poor Sergeant King holding the bag.  At the time, I thought it was a bit exaggerated, but at least it had life to it.

McCormick's version seemed almost catatonic, less shocked and horrified by Stockdale's well-meaning but embarrassing behavior and actions and more almost resigned to it.

A good example as to why Clark's version is better than McCormick's is when Sergeant King rhetorically asks why he gets all the idiots.  Clark's King makes this a declaration of hysteria, of panic, of pained disbelief at his bad fortune.  McCormick's King makes this a declaration of frustration, or resignation, of someone who is weary more than shocked.  It's as if McCormick's King has come across many Stockdales, while Clark's King has never met anyone like Stockdale.

The good thing about Adams' version of Whitledge is that one wouldn't think someone like Nick Adams would be able to pull it off.  Adams was known for more tough-guy roles, particularly on the television series The Rebel.  It's a credit to Adams' versatility that he could be this meek little man.

The bad thing about Adams' version of Whitledge is that his version came off as a whiner, forever complaining about one thing or another.  It made him less sympathetic and almost an antagonist to Stockdale, an original frenemy.  LeRoy's version, on the other, made Ben into his friend and partner in crime, less whiny and more innocent (though not as naive or clueless as Stockdale).  They formed a great double-act, with one helping the other.

This is a sharp contrast to the Griffith/Adams team-up, where they appeared to be at odds more than they were joined.  I thought it was to build up drama, but I didn't think it necessary.

It's almost a shame that LeRoy, a good director, was undone by some poor decisions in No Time for Sergeants.  There were the endless scenes, the forced attempts at humor that veered towards farce, and the general disinterest the film elicited.  Segal, on the other hand, had to work with a limited time frame, so he kept things flowing.  He guided the characters into being real without being ridiculous.  LeRoy never made his characters real, but he did make them ridiculous.

Compare the psychiatrist scene between how Segal paces it and LeRoy paces it.  Segal's version is quick, rapid-fire, letting things build one on top of the other.  LeRoy is slower, as if knowing there are 'punchlines' and expecting to turn to the audiences for the expected laughter.

To me, there is no comparison.  The television version moves quickly, has a sweetness to it, and has Andy Griffith's character an innocent lost in a strange world and doing his best to make it homey.  The film version moves slowly, has a touch of harshness in it, and has Andy Griffith's character a dimwit making chaos and generally uninterested if it bothers anyone.

Something got lost between television and theatrical screens, and my recommendation is to stay with the kinescope version of No Time for Sergeants.  At one hour, it will move faster and be funnier than the nearly two hour film version, which seemed to drag and add things to make it drag more.