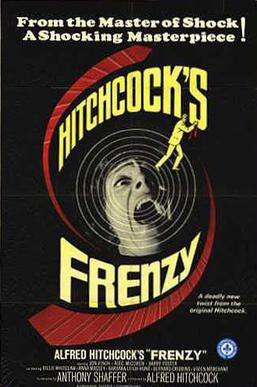 As Alfred Hitchcock's career was winding down, the Master of Suspense seemed to be slipping.  Neither Topaz or Torn Curtain are held in high regard, though the merits from my perspective are yet to be seen.  We look now at Frenzy, his penultimate film.  While we have moments of Hitchcock brilliance, I found Frenzy to be rather distasteful, even vicious, and far more graphic than I've seen from Hitch.

There have been a series of murders by someone dubbed the Necktie Killer, based on the fact that the killer strangles women with a necktie before or during his attempted rape of them.  His latest victim has just washed up on the Thames, nude, with the necktie round her neck.

Enter into the picture one Richard Blainey (Jon Finch), a former RAF pilot who is down on his luck.  Just fired from his barman job by his cantankerous boss, he is searching for food, money and shelter.  He turns down an offer from his friend, Robert Rusk (Barry Foster), and hits up his ex-wife, Brenda (Barbara Leigh-Hunt), who runs a matchmaking agency.

They spend the night together, but nothing apart from a hidden 50 pounds from Brenda comes from it.  Coincidentally, Robert goes to Brenda's agency and again pushes for a woman to fit his 'peculiar needs'.  Brenda still gently but firmly tells him no.  This time, however, Robert won't be denied, at least the pleasure of Brenda's company.  Robert attempts to rape her, but he's impotent, but not impotent enough to strangle her, with his necktie.

Through a series of bad circumstances, it's Dick who is held as the prime and only suspect in the Necktie killings.  Things aren't helped when, despite hiding out at a former RAF mate's place, the newest victim is Dick's girlfriend, Babs Milligan (Anna Massey).  Robert is forced to go after Bab's body, which he hid in a potato sack, when he realizes that in the struggle, she grabbed his necktie pin and it is now lodged in her cold dead hand.

It looks like, despite his innocence, Dick will hang for his crimes, and Robert, who helped in capturing Dick, will get away with it.  Richard screams out at his sentencing that Robert Rusk is the real murderer, and swears to get him.  Chief Inspector Oxford (Alec McCowen), who up to now was firm in his belief of Dick's guilt, begins to question whether he has 'the wrong man'.  He now begins investigating Rusk, all while suffering the horrors of his wife's adventurous cooking.

Dick manages to escape before his execution date, and eventually though independently, both arrive at Rusk's place, where another victim is found, and Rusk comes in with a giant trunk.  "Mr. Rusk, you're not wearing your tie," Oxford observes while Dick seethes.

There are moments of the old Hitchcock genius in Frenzy.  As Babs and Robert go up to his place, Babs confident that Robert will help, the camera pulls back and away from the scene in total silence for what seems agonizing minutes.  Without saying a word, without a drop of music, without anything really, we can imagine the horror of what is going to happen to poor Babs.  Another moment is at the trial, where the door blocks out the dialogue for most of it, with only little bits to let us know what the court has decided.

Those moments, however, are few and far between.  It's interesting that Hitchcock, if memory serves correct, was a champion of the "don't show" school, saying that what the audience can imagine is far more terrifying than what someone can put up on the screen.  It's interesting because in Frenzy, we get a surprisingly lurid and graphic set of scenes.  Brenda's murder is one of the most disturbing moments in a Hitchcock film, so awful in terms of brutality.  The sight of Robert ripping Brenda's dress and bra off to expose her breasts in closeup is already highly disturbing, but the actual strangulation and conclusion, with our victim's tongue sticking out after a particularly vicious killing, borders on the obscene and sadistic.

It's as if Hitchcock, now unbound by the Production Code, decided to wallow in 1970's grindhouse.  That, coupled with a bit of dialogue earlier, is just grotesque.  Earlier, two lawyers were discussing the crime, and a middle-aged barmaid, overhearing this, said that she heard he raped them before strangling them.  Looking her over, one of them quips, "Every cloud has a silver lining", and perhaps it's me, but I don't find jokes about raping a woman funny. 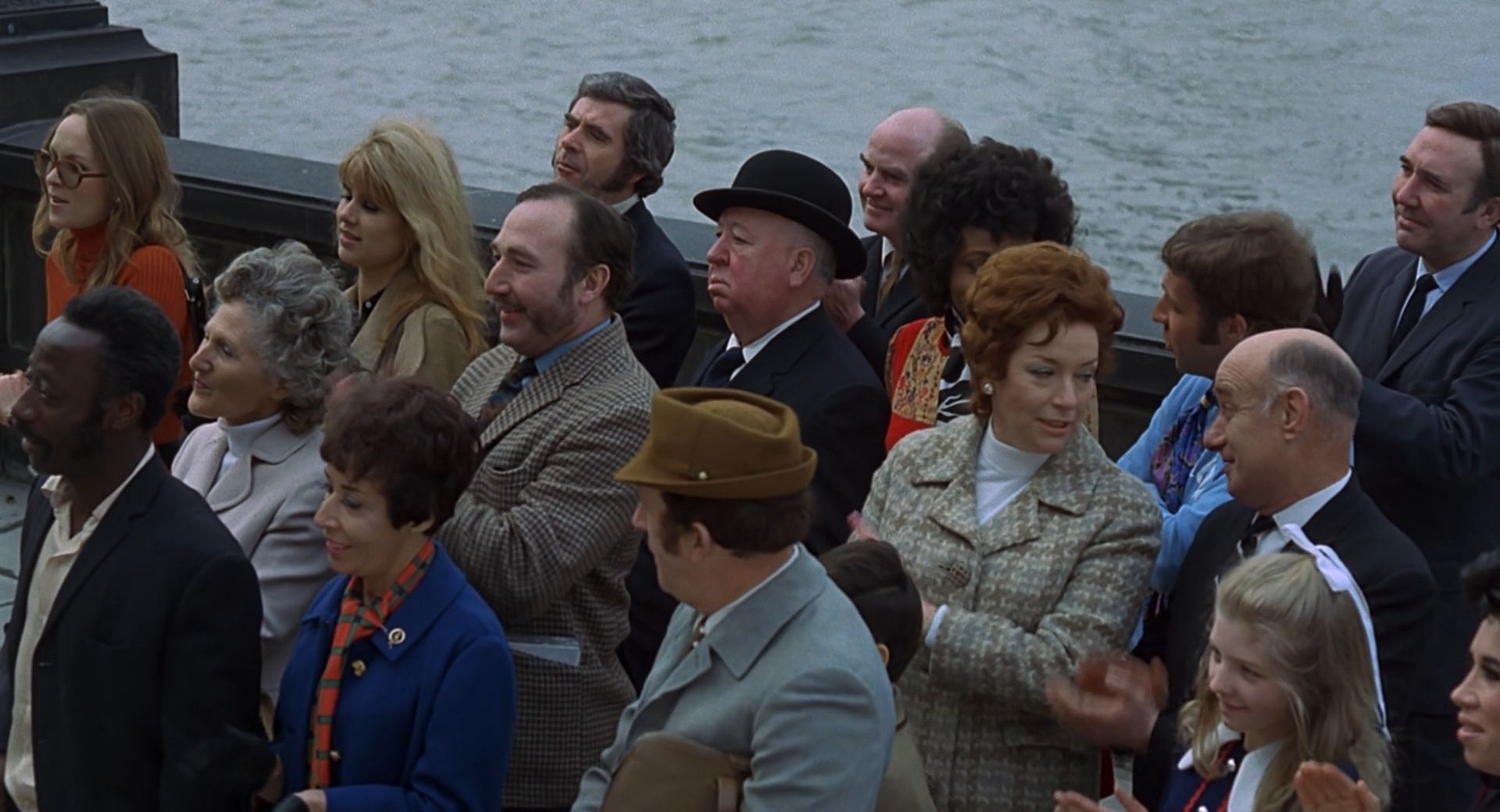 There's just a viciousness, an unpleasantness, a sadistic nature to that scene that so bothered me.  There is also another moment, when Robert has to break the hand of Babs to get at the pin.  The corpse is now nude, and as he tears at the bag, at a certain point he thrusts his head where Babs' crotch is.  Maybe Hitchcock and screenwriter Anthony Schaffer (adapting Arthur La Bern's Goodbye Piccadilly, Farewell Leicester Square) thought showing necrophiliac oral sex was funny.  I thought it horrible.

Again and again, seeing people murdered in such gruesome ways, particularly people who are essentially defenseless, plays at me, and I find myself highly uncomfortable.

It's also interesting that while Hitchcock continues with his 'wrong man' motif, the wrong man here was not someone one cared about.  Dick lived up to his name: boorish, drunk, and unpleasant, it's a wonder why Oxford had second thoughts on him being the Necktie Killer.  It's also a wonder why a.) the police never found more victims after Dick's arrest, b.) could connect him to the other murders when they probably couldn't, and c.) why Oxford suddenly believed Dick's ramblings.

The performances weren't altogether good in my view either for the most part.  I found the acting a bit overly-dramatic and stale, particularly by Finch as the mean and petty Dick.  I thought Foster was better as the crazed Rusk, and both Leigh-Hunt and Massey were quite good as the poor victims.

I just hated to see them killed, and in Leigh-Hunt's case, in such a particularly ghoulish and graphic fashion.

I could have done without the comedy bits of McCowen and Vivien Merchant as Mrs. Oxford, though she was amusing in her desire for Avant-garde dining.

Frenzy tries for polish and for grindhouse, and I don't think it works on either.  Again, there are sequences that I think are brilliant (the silent moments when we know Babs is biting the dust), but on the whole, I think Frenzy shows why Alfred Hitchcock films post-The Birds aren't in high demand (though in at least one case, I think it should be).