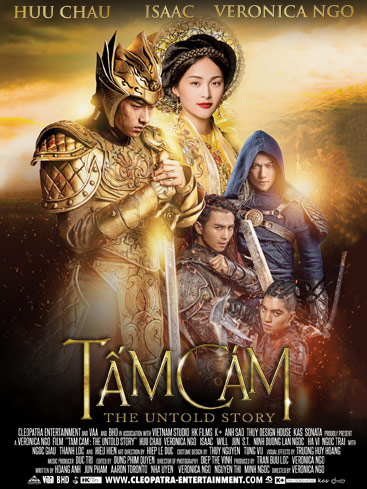 An aspect of Tam Cam: The Untold Story that attracted my attention was the fact that this Vietnamese action film was directed by a woman: Veronica Ngo (or Ngo Thanh Van).  It is sadly still rare to see a female director, let alone a female director of action/fantasy films.  Tam Cam: The Untold Story (or to use the Vietnamese version, Tam Cam: Chuyen Chua Ke) will find some people familiar with aspects of the story as this is the Vietnamese version of Cinderella.

Whether non-Vietnamese ever considered Cinderella to have monsters and reincarnations in the story I leave to viewers.

Tam Cam is all based on the Vietnamese fairy tale, but to my Western eyes, it almost seems two films in one.  The first part is the traditional version of a Cinderella story.  The kind and noble peasant girl Tam (Ha Vi Pham in a debut performance) meets the noble Prince (Isaac, whom I understand is a pop star in Vietnam along with other cast-members from the group 365).  Both are instantly smitten with each other, but Tam has a wicked stepmother (Ngo) along with a snotty stepsister, Cam (Ninh Duong Lan Ngoc), who both work her brutally.  There is an announcement from the Palace of a festival where all eligible maidens, from princesses to peasants, are invited.

Tam comes close to going, but her stepmother manages to stop her.  With a little help from Tam's somewhat cranky and fey Fairy Godfather, she has a beautiful ensemble and a horse to take her.  The Prince isn't too keen on this parade of beauties and not-so-beauties, more concerned about his dying father and impending war, and not happy he has little say in matters of the heart.  Rushing out, he is persuaded to return, though not before one of his servants, Luc, finds a beautiful shoe.  The Prince, declaring that he will marry whomever the shoe fits.  Obviously, it will fit one girl, who happened to have lost her shoe as she rode towards the Palace.

Had the film ended there, most non-Vietnamese unaware of the culture or of the legend of Tam Cam would have thought would be the end of it.  As the saying goes, 'but wait, there's more'.

Tam and the Prince are deeply and passionately in love, but at the prompting of the wicked Magistrate, Tam's stepmother murders her by chopping down the tree where she has gone to pick berries for her late father's memorial.  The Prince, devastated by the death, finds himself now with Cam, a poor substitute for his beloved Tam.  True love, however, will not be denied: as Tam returns at various times as a bird, a tree, and as herself much later on.

There is treachery all around him.  There's Cam, and then the Magistrate, whom we learn is not even human.  He is some kind of monster who must swallow an amulet at a specific time after having collected 49 souls for his demonic rituals, and once in full human form he can take the throne from the Prince.  The Prince is betrayed by almost all save the loyal Luc, and with a little help from more Fairy Godfathers/Mothers, Luc, and Tam, the Prince does battle with the Magistrate in an epic battle where all things end up happily. 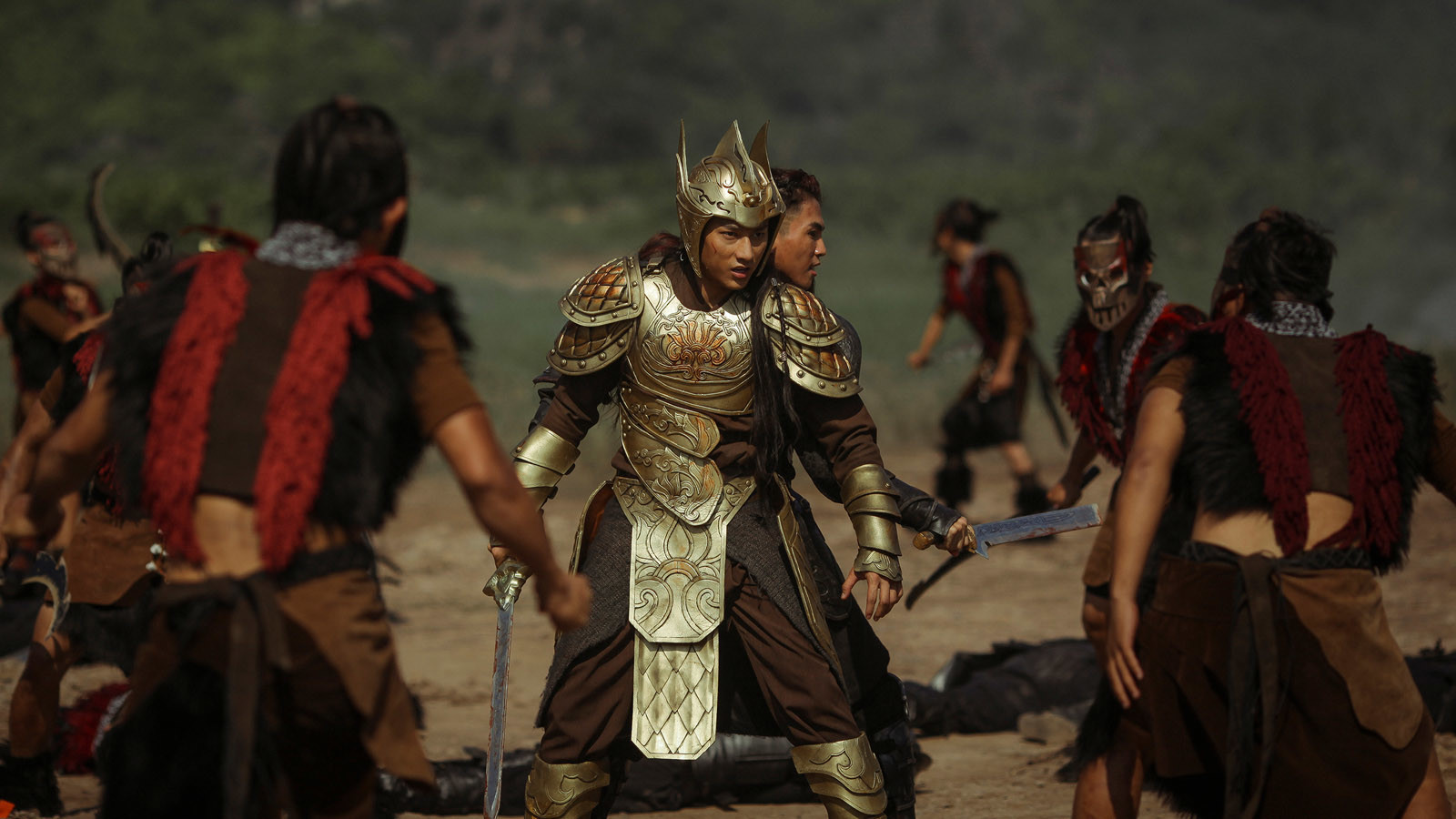 Tam Cam: The Untold Story as I said is essentially two movies wrapped in one.  That shouldn't be a surprise given that there are five credited writers on the film.  That also shouldn't be seen as a slam against it, because if anything Tam Cam does give two types of audiences what they want.

The first part of Tam Cam revolves around the romance between Tam and the Prince.  The second revolves around the Prince's war with a neighboring state instigated as part of the Magistrate's scheme.  It's the perfect date movie: those who like sweeping love stories can enjoy the first part, while their boy/girlfriends who do not can stay for the massive battles and monsters.

In short, there is enough to satisfy everyone, if you don't mind reading subtitles.

Ngo, who was not only the director and one of the producers but also one of the five writers, did quadruple duty as the wicked stepmother.  In her performance, she made her stepmother wicked without being comical, not an easy task.  I think as good as her performance was, Ngo's real skill was in her directing.  She balanced the epic feel of the action and the lavish sets and costumes without sacrificing the love story.  Ngo even managed to sneak in some moments of comedy.

The Fairy Godfather was a bit crabby and short with our heroine, at one point asking her if she ever got tired of crying.  There is a junior official who is also quite comical in his snobbishness and snappish manner, though perhaps his somewhat effeminate manner might be questionable. 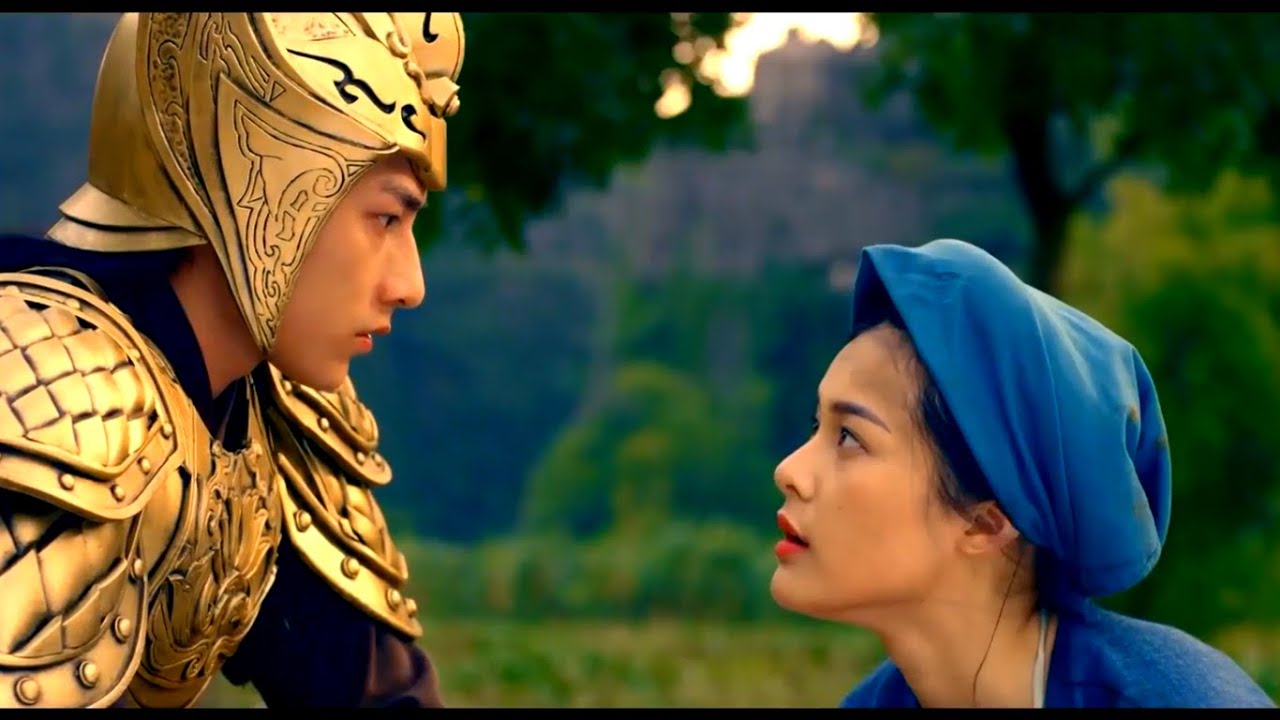 As Ngo directed, wrote, and produced as well as costars in, her role as the Wicked Stepmother was limited, but in terms of directing she has proved herself quite effective.  She drew wonderful performances out of her cast, both major and minor characters.  Newcomer Ha Vi Pham was touching as Tam, though I agree with her Fairy Godfather: a bit too much crying for a person her age.  Isaac held his own in the action scenes, and did well in the romance, though at times the impassioned nature of their romance might get on the nerves of the non-romantic.  Ngoc as Cam balanced being mean with being frightened.

Tam Cam: The Untold Story is a true smorgasbord of a film.  It has fantasy (the special effects on the whole quite good, almost Harryhausen-like, though sometimes looking unreal), it has action (some of the battle scenes quite impressive and epic), it has comedy (at one point, the Fairy Godfather comments that Tam's stepmother & sister are like 'the Energizer Bunny', a most curiously anachronistic but amusing touch), it has fantasy (the evil Magistrate being so obviously evil I was surprised he didn't twirl his mustache and beard) and heaping helpings of romance.  It has so much that it might overwhelm audiences, but on the whole it proves itself highly entertaining.