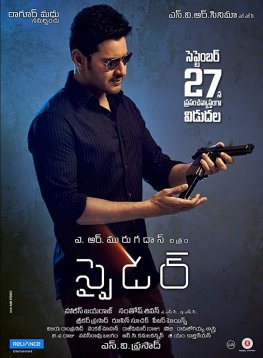 In the time since I started enjoying whatever Tollywood features find their way to my hometown of El Paso, I've grown fond of Mahesh Babu, probably because he's the only Tollywood superstar I've been exposed to on a repeated basis.  Ever since I plunged in with Dookudu and onward, I have found myself enjoying his films despite not speaking a single word of Telugu.

The last Babu film I saw was the intensely disappointing SVCV, a film so disliked that even the Telugu-speaking Indian students from UTEP howled at it (as they could follow along without subtitles and knew the stars, I deferred to them, though I had my own American non-Telugu-speaking issues with it).  Perhaps that is why, in terms of Indian cinema, the local theater has opted for Bollywood films with Hrithik Roshan.

Well, it's time for a comeback, and Superstar has returned to my screens with Spyder.  In terms of cinema, Spyder is quite good, though it probably will come as a shock to those not used to Tollywood films to have something as serious, even frightening, as a gritty story of a totally unhinged serial killer mixed with elaborate song-and-dance numbers.  There are moments of unintended hilarity within the film, but one could genuinely see it remade for Western audiences as a straight thriller.

Shiva (Babu) works at an intelligence agency that listens in on telephone conversations without warrants, what they call 'call tapping' and what I think is called in the U.S. 'wire tapping'.  The legality of these efforts is hazy, but let's say that it is technically illegal but tolerated.  Shiva is listening in to see if anyone is in danger, and he is pretty good about stopping crime before it takes place, a real-life Minority Report with a dash of The Lives of Others. 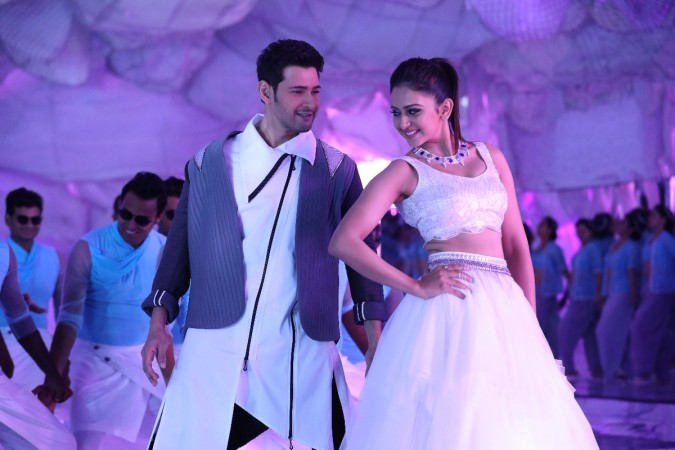 The other call is one he overhears of a young girl who calls a friend, commenting how her house is the only one in the neighborhood where the power went out and that she hears 'ghosts' in there while she's alone.  Concerned but not overly alarmed, Shiva calls a friend who is also a police woman and asks her to look in on this house.

The next day, we learn that both the young girl and the female officer were brutally murdered, and not just murdered, but dismembered in a savage way.  To make things more horrifying, the killer mixed their limbs in a sadistic jigsaw puzzle.  Devastated by his inability to stop this crime, Shiva resigns, until his father convinces him that not only was he not responsible for their deaths, but that this is not the first time this person has killed, and if Shiva does not go back, it won't be the last time.

With that, Shiva returns and begins his investigation, which involves looking through CCTV video (again, did I mention all this is done sans warrants or other legal details?) and through his wit and work, finds a suspect.  It is a man known as Bairaduvu (S.J. Surya), and his tale is one that is shocking, and I imagine quite shocking for Indian audiences.

He was born in a cemetery, where his father worked as an undertaker.  As his first sounds were those of people wailing, he grew up deriving pleasure from the pain of others.  When people didn't die, he was actually sad.  It wasn't long before this child decided to take matters into his own hands, by literally killing people.  Only his younger brother, in no position to stop him, knew, but no matter: the townspeople burn his parents house down, with them inside.  Bairaduvu and his brother see this, and soon wander off, where they begin perfecting their macabre hobby. As adults, they continue the madness, and after a battle on a roller coaster (yes, a roller coaster), Shiva realizes he's captured the brother, who is as much a sadist as Bairaduvu.  Bairaduvu reveals himself in a gruesome video where he confesses to having killed a person for every column of a major railway line and burying them inside each one.  At the literal end of the line, Shiva, concealed by lights, taunts Bairaduvu to come out, and shoots the brother in the head.

Now it's a battle of wills between the noble Batman-like Shiva and the evil Joker-like Bairaduvu.  At one point, Bairaduvu comes close to killing Shiva's mother and brother, and even manages to stop Shiva by causing an accident that literally impales Shiva.

If you thought Shiva wasn't going to survive crashing into a metal rod, you obviously didn't realize it was Mahesh Babu.  Of course he was going to survive!  Not only was he going to survive, but Shiva manages to shoot Bairaduvu enough to injure him.

Now, with the aid of housewives watching an Indian soap opera specifically targeted to where Bairaduvu is hiding out, he is finally captured, but our mad murderer has one or two more tricks up his sleeve, culminating in a final battle in the ruins of a hospital.

In between all this murder and mayhem, you get colorful, almost Katy Perry-like musical numbers where the more aggressive Charlie pursues a more reluctant Shiva.

It is a bit reminiscent of how Audrey Hepburn is doing the pursuing of the much older and more hesitant Cary Grant in Charade, and not just because Charlie is chasing Shiva and not vice-versa.  It's in that Mahesh Babu is 42 and Rakul Preet Singh is 26.  A bit of dialogue confirms that she is still in University while he is already an adult with a legally dubious job (but like all good unmarried Indian boys, still lives at home, or at least that's what I think all good unmarried Indian boys do, I've no way of confirming that).   Making things more scandalous, while Singh herself is 26, her character Charlie is supposed to be 21, and while we don't know Shiva's age, it does make Shiva almost old enough to be Charlie's father!

As youthful and athletic and even as age-defying as Superstar is, he still looks older than his paramour, and part of me wondered if we were slipping a bit into Lolita territory here.  Even the age difference between the male and female lead was not as big an issue for me as the fact that how he got to know her was, if not flat-out illegal, at least morally questionable.  Near the end, I think Charlie discovers this fact but it's never brought up again.

If we think about it, Spyder (having the root word 'spy' in it, down to being spelled out as part of the lyrics to the opening song), is touching on issues of domestic espionage versus public safety.  Shiva and his men are not recording private conversations or deliberately listening in on calls or social media.  However, we do get into dicey territory with the overall plot.

We also get into surprisingly gruesome details within the action and dances.  You watch in horror as Shiva is impaled, and while his mother and brother are spared death thanks to a really clever twist (and the villain's penchant for monologuing first detailed in The Incredibles), the suggestion itself is surprising, as is the cold-blooded shooting of Bairaduvu's brother.

In terms of performance, the clear standout is Surya as our unhinged, psychopathic killer, a mix of Heath Ledger's The Joker and the real-life Night Stalker.  I hope Surya gets a chance to do a comedy, if only to show that he isn't going to be relegated into really frightening portrayals.  He was intense, cold, intensely frightening without ever going full-on camp.  Every time he's on the screen, he really commands it in Bairaduvu's indifference to humanity. Mahesh Babu continues to show a greater range than perhaps I have not given him credit for.  When the script calls for drama and shock, Superstar does deliver.  He excels in these action roles when he plays a good guy, nominally an officer of the law.  I think the only time he ever played against this type was in The Business Man, yet I digress.  In the action scenes and in the dramatic moments, he did a commendable job.

In terms of his dancing, I noticed something with how he moves.   His dancing consists of extremely sharp, quick moves.  He is not like a Fred Astaire, who moved gracefully and smoothly.  Babu, instead, moves in bursts, and sometimes has no problem standing still.  Whether this quick, sharp movement is typical of Tollywood films or just something Babu does I cannot say.  At least he didn't pull his pant leg as part of the dance numbers.

It's a pity that Singh was not in the film long enough to make an impression, but she handled her comedy bits well.

I can remember only three dance numbers, two between Shiva and Charlie and one that introduces our Shiva.  Out of them, I think the best one is the first one, Boom Boom, where we learn about how great Shiva is.  The melody stays with you after the movie ends (in part because they use it when Spyder ends), but also because the lyrics do some interesting shout-outs.  As part of the lyrics, we get nods to Marvel Comics and Hogwarts, saying that Marvel Comics would have had to create someone like Shiva.

The first of the duets between Shiva and Charlie, Ciciliya Ciciliya, also threw in some contemporary nods, referencing itself as being a bit like a La La Land song.   It was colorful, almost candy-like in its execution, and a nice respite from the murder and madness of the dark story.  The third one, Haali Haali, might have been the item number, where we see our lovers expressing their love again.

I will mark that Babu was saddled in some awful costumes in some of the musical numbers.

Oddly, there were no musical numbers involving Bairaduvu...

Writer/director AR Murugadoss had some unintentionally hilarious moments: the roller coaster fight that is downright insane, the curious ode to stalking Achcham Telugandham with some really silly English lyrics (rhyming 'mysterious' with 'Confucius'), and a finale with a boulder that is more comical than anything else.

On the whole, with an intense performance by Surya as our criminally murderous mastermind, a couple of good musical numbers, and the compelling Mahesh Babu, Spyder is an interesting and entertaining, albeit quite dark, story.

Only in a Tollywood film could one get away with lavish musical numbers in a film about a serial killer.