Dookudu is neither dubbed or subtitled, so for nearly three hours you get to hear people speak in a completely foreign language, and whenever titles do appear on the screen they are in Telugu, making it completely illegible to almost all American readers.  Throw into the mix six musical numbers of which only one appears to be actually integrated into the story itself, and Dookudu appears to be a film that your average American would flee from.

I discovered something about films in general while watching Dookudu: dialogue certainly helps in appreciating a movie, but overall while some of the subtleties are lost because you just flat-out don't understand what their saying, the acting, music, and camera work is able to fill in a lot of a story in a foreign-language film.

I should note that I may have gotten some things wrong, what with the language barrier and all. As much as I understood of the film, the sprawling plot goes something like this: a major politician in India, whom I think was the descendant of a rajah, is beloved by his community.  However, there are enemies near him, and the Beloved Politician is killed in a major car accident.

We go to many years later, and the Beloved Politician's son, Ajay (Mahesh Babu) is now a super-cop heading up an elite squad who are either suspended or top secret (sorry, could never figure out which one it was).  This squad is investigating a major crime kingpin, and their investigation takes them to Istanbul.  While there, Ajay meets and is enchanted by the beautiful Prashanti (Samantha), a fashion designer who unbeknownst to him is the daughter of his superior officer (one who got shot by Ajay in the buttocks during a raid).  Prashanti rebuffs Ajay at first, but I don't have to be a Tollywood fan to realize that they have to eventually end up together. 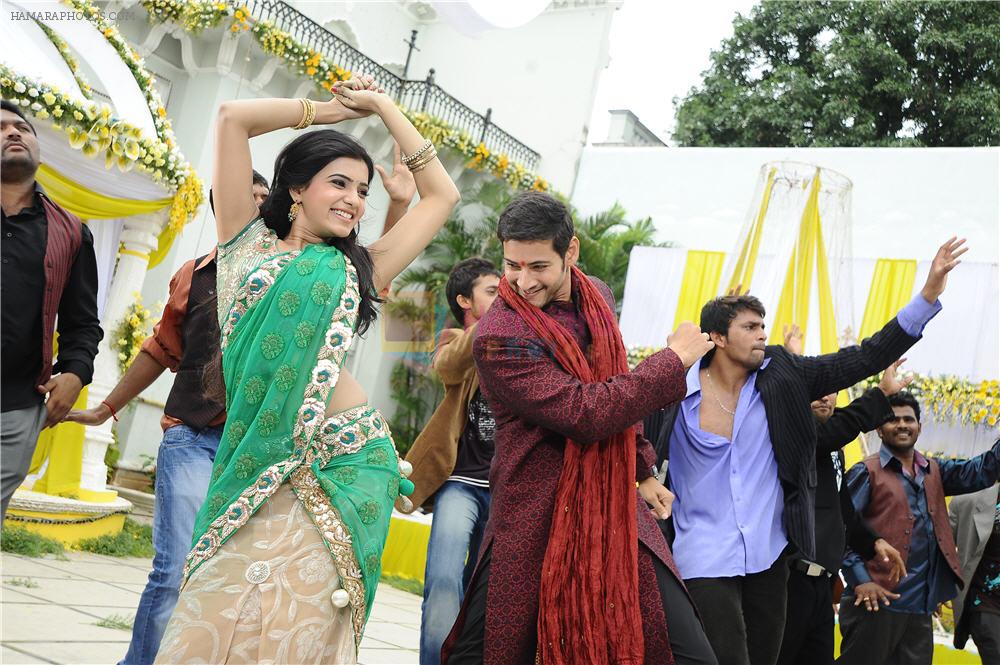 Apparently, the Beloved Politician must be kept in the dark about all of this, so everyone around him must pretend that things are as they were before his accident.  With that, Ajay must get their old mansion back.  Unfortunately, their mansion has fallen on hard times and is now used as a set for films.  Somehow, Ajay convinces the producer that the Beloved Politician is going to be part of a 'reality show' (one of the few English terms used). This subterfuge goes on for a long time, with comedic hijinks ensuing.

Eventually, the kingpin makes his move, kidnapping the Commissioner in exchange for one of his henchmen.  The plan goes a bit awry, and we get to Intermission.


Seriously, all this takes place before the screen reads INTERMISSION.

Well, to wrap things up, Ajay discovers that the Kingpin attempted to bribe his father the Beloved Politician, but when he refused, the Kingpin tried to have him killed.  With that, Ajay now goes after the Kingpin by hoodwinking one of the Kingpin's friends into thinking he is a film director who can turn him into a Tollywood star and get his friends/employers into yet another reality show, thus including the reality show producer.  Ajay and Prashanti finally marry, but the Kingpin puts two and two together, and Ajay finally manages to take his henchmen and the Kingpin down one by one, the last one in a remarkably grisly way.  The Beloved Politician accepts that his son is a super-cop, and things end happily after. 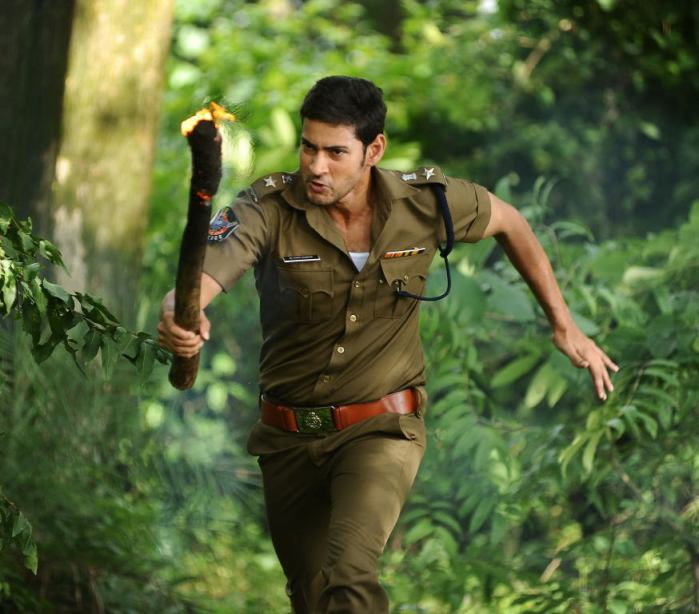 In terms of narrative, Dookudu is an extremely long film, but there's a delight to most of it that one really doesn't notice all that much that an extraordinary amount of time has passed by.  There was a lot of time taken up by the comedy of fooling the Beloved Politician into thinking Ajay was a major political figure, especially after the intermission.

In fact, it takes up so much time that we almost forget the police/action part of the story.  In some respects, Dookudu becomes two stories that eventually join as one, but a lot of momentum is lost by taking up so much time with the comedy.

However, this isn't to say there aren't really good things in Dookudu, even for those who cannot understand what exactly is being said.  Of primary interest are the various action scenes where Ajay is called upon to take charge.  The best fight scene is just before Intermission, when Ajay manages to temporarily rescue the Commissioner but then loses him.

Babu as Ajay goes into full Jason Statham mode: fighting fiercely in a no-holds-barred brawl against all the henchmen.  The fight scenes are not overly graphic, but the fact that they hold back actually has the effect of making the idea of the violence much more gruesome.

That's not to say there aren't some surprisingly shocking moments in Dookudu: the Commissioner's end is rather startling.

Going a bit further into the fight sequences, whether it's a standard in Tollywood films to have the fighting seem exaggerated, almost comedic, or not I cannot say one way or another with any certainty.  However, at times the fights between Ajay and whomever he's going up against appear to be rather bizarre visually to this Western eye.

In one sequence, he's fighting a henchman on the roof of the hospital.  The henchman pulls a satellite dish from the roof (my only thought was the poor people who lost their programming), and whenever Ajay hit the henchmen, his fists appeared to be accompanied by flashes of light; the lightning from the sky did not help make the situation less surreal and curious.

Finally, I thought Babu's style of running on screen was rather curious, a bit strange in how his body moved when chasing bad guys.  Maybe it's because it's been a long while since I chased bad guys, but it doesn't take from the curious nature of his movements.  Yet I digress.

As I've stated, Babu, who to me looks a lot like Eric Bana, handles the action well, and has a charisma on the screen that exudes self-confidence as a tough customer.  What is interesting is that while he does the action scenes well, he is also required to be a charming, even light comic performer who can dance. I cannot vouch for whether he actually sings in Dookudu since I'm told that Tollywood stars don't shrink from having their singing voices dubbed.

Here is where Dookudu becomes an interesting visual treat if not strictly a logical one.  The film has six musical numbers, but only the last one, Adara Adarakottu, the wedding song between Ajay and Prashanti, appears to be anywhere related to the story.  In this number, we get to hear from not just our romantic leads, but from the parents as well.

In truth, it is close to what I imagined a big Tollywood musical number to be: grand, lavish, full of splendor and a large chorus of dancers.  You know it's a lavish number because the cloth over the wedding canopy change from pink to yellow to blue; it's pretty, grand, but don't think too hard on why the colors change as much as they do.

In all the other musical numbers save one, they appear to be related to the romance between Ajay and Prashanti.  The second musical number, Guruvaram March Okati, appears to have been triggered by an accidental kiss between them and to its credit, does show us some beautiful images of the former Byzantium.

Musical number five, Dethati Dethati, comes about, if I understand things, from Prashanti winking at our hero.  In fact, the only lavish musical number not related to the romance is the first number, Nee Dookudu, which is about Ajay, I think.  I note that there is a continuity error in this number: sometimes Ajay is wearing sunglasses in one part of the number, sometimes he's not. In Dookudu most songs appear to just pop into foreign locales and are related to the plot by the thinnest of threads.  Take for example the next to last number, Dethati Dethati.  Out of nowhere, Ajay and Prashinti appear to be in the Alps, singing about how they now found love with each other.  How they got to the Alps, we don't know.  Why they ended up in the Alps, we don't know.  How they ended up back in Kolkata well, I suppose we're not suppose to take it seriously or think logically on it.  The Chulbuli Chulbuli number where they I think express mutual attraction has them in a desert with what I take to be Polynesian dancers accompanying them.

Yes, musical numbers aren't really suppose to be logical in the strictest sense of the word, but this might be taking things a bit far. Doesn't take away from the lavishness of the numbers, but doesn't add to the logic of them either.

What is good about cinema is that even those who do not understand Telugu or any other Indian language will be able to follow the plot of Dookudu as sprawling as it is.  It is because film has certain cues that tell us what is going on.  Srinu Vaitla is a competent director: the music, the camera work, and the acting all fill in the blanks for those who can't understand what is being said.  Whenever a character is close to revealing a secret he's suppose to keep quiet for comic effect, the camera moves a little closer to the character's faces, the actors have a shocked reaction, and the music is humorously menacing.

I didn't dislike Dookudu at all; far from it; the film was generally entertaining and certainly a damn sight better than the horrors of The Hangover Part II or The Green Hornet.