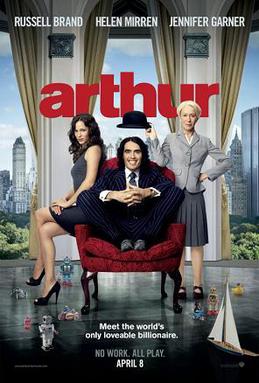 
I have never understood Russell Brand, and I'm not referring to his accent.

I don't understand why he is considered a 'comedic genius'.  I also simply cannot comprehend his reputation as this amazing lover for whom all women lust for given that I think he's one of the ugliest men in all Creation.  Now, I have to say that I haven't seen as of today either Forgetting Sarah Marshall or Get Him to The Greek.  Therefore, Arthur is the first real taste I've gotten of Russell Brand and his unique 'comedic genius'.  Now, granted, Brand is playing a character, so he's confined to a particular role as opposed to doing his shtick, but after Arthur I can't help think that his shtick is pretty much like the film: it thinks its funny but is really boring and lacking in entertainment.

Arthur Bach (Brand) is a wastrel of a man: a billionaire born into wealth who indulges some rather bizarre behavior, such as him and his driver racing down the streets of New York City in the Batmobile with them dressed as Batman and Robin for no known reason.  His mother Vivienne (Geraldine James) is irritated by her son's antics, especially since they will bring bad publicity to the corporation she runs, and which Arthur will one day operate (though given his behavior it doesn't seem possible that any sane person would leave him in charge of a dog, let alone a billion-dollar company).

Arthur has only his driver Bitterman (Luis Guzman) and his nanny Hobson (Dame Helen Mirren) to enable his drinking and erratic, daresay genuinely insane behavior.

In order to make Arthur more mature, Vivienne has decided its time for Arthur to marry.  The chosen bride?  Susan (Jennifer Garner), who is wealthy thanks to her construction-tycoon father (Nick Nolte).  Arthur doesn't want to marry her, but if he doesn't, he'll be cut off.  Therefore, he chooses the lesser of two evils.

It's at this time that Arthur meets Naomi (Greta Gerwig), who runs an unauthorized tour of Grand Central Station.  In quick succession, Arthur falls in love with Naomi, but Susan will not be denied: she will marry Arthur to 'move up' in society and take over the Bach Corporation.   Arthur attempts to earn a living, failing spectacularly at it, and even is coerced by Hobson to go to A.A. which also flops.

However, Hobson falls ill of a mysterious disease, and her illness and death do at first make him try to sober up, but he still plunges into a bender.  He agrees to marry, but in the end, cannot do it.  He is cut off, but Naomi, who for some reason became upset at Arthur's suggestion she could be his mistress after he marries, won't take him back.  Six months later, Arthur appears to be totally sober, doing for himself, and discovers Naomi at the public library, reading from her children's book.  With that, the lovers reunite. 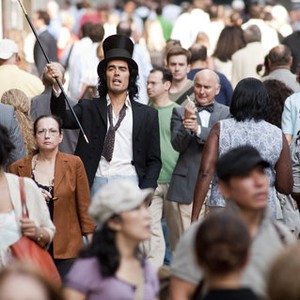 Arthur's biggest problem out of many, many, many problems, is that we never believe Arthur is an actual alcoholic.  There are long stretches when we don't see Arthur actually drinking on screen.  Instead, we see Arthur as an annoying, lazy, self-absorbed individual who may be quite literally insane.

His behavior cannot be attributed to a serious drinking problem, but to an amazing narcissism and thorough clueless nature about anything outside himself.  At best, Arthur is immature, at worse, downright bonkers.  How else to explain him buying a suit once owned by Abraham Lincoln at an auction and then walking out wearing it?

Even worse, everyone around Arthur is enabling him to a degree that is flat-out impossible for any sane person to believe.  No one, especially Vivianne or Naomi, question why a man in his thirties who indulges every whim, particularly sexual, still has a nanny.

Allow me to digress for a moment.  Perhaps screenwriter Peter Baynham, adapting the Steve Gordon script from the original film, and director Jason Winer thought it would be innovative and revolutionary to switch genders on the Hobson character by making the valet into a nanny.  However, the end result makes no sense.

While no one would question why a wealthy man, even a serious lush like Arthur Bach, would have a valet, an adult male having a nanny for over thirty years goes beyond illogical.  It makes Arthur hopelessly immature, almost imbecilic, and makes it appear that everyone around him is coddling someone who needs help, not someone to help him "wash his winkie", and having a grown man refer to his penis as his 'winkie' only makes things worse.

Really, what you have in Arthur is a story of insanity: every person in the film just doesn't have either a brain or a heart and in some cases, both.  Hobson never shows how or why she cares for Arthur given that she can barely hide her contempt for his irrational and irresponsible behavior but never actually intervenes either subtlety or overtly to get him to stop drinking or doing nutty things.

A rational Vivienne would never even contemplate allowing Arthur, who has apparently never held a job in his life or a thought in his brain, to be in charge of a company.  Susan makes it clear she is only interested in Arthur for his family name, allowing her to enter into high society.

However, there's a strange and contradictory sense in her character.  One moment she's telling Arthur she wants this marriage so people will stop thinking of her as the daughter of 'the contractor from Pittsburgh', but then the next moment she's attempting to seduce an oddly unwilling Arthur: odd because from all appearances he isn't particular about who he sleeps with.  Even if in this case she was the drunk one, it still doesn't make any sense.

While Susan's motives are clear because she tells us, Naomi's are less so.  We never get a love connection or any connection really between her and Arthur.  In a remarkably short time we're expected to believe they fell totally in love, but there's never a reason to think Naomi would find Arthur attractive in any way. The performances actually made me sad.  I actually felt sorry for Garner: even if she isn't the best actress around she deserves much better than this sorry script.  Here, curiously, is another problem with Arthur: we have no sympathetic characters, no one we can genuinely care about and thus, care about their plight.  Susan is a flat-out bitch, so we don't care about her.  Granted, we're suppose to not want Arthur to marry her, but we don't get why Naomi would want to marry Arthur.  About the only rational thing any character did was when Naomi ordered Arthur out of her home after he suggested, but did not state flat-out, that she could be his mistress.  At best, it makes him clueless, at worst, hopeless selfish.

Mirren, as I've stated, never demonstrated why she stayed with someone she doesn't appear to like, let alone love.  Any sane person would have tried to get her charge to stop sleeping in a room where she turns out the bedroom lights and have Twinkle, Twinkle Little Star play over large models of the solar system.

As for Arthur himself, we don't like him, not because he's an alcoholic or even a heavy drunk but because he's so unlikable: selfish, clueless, immature to the point of being an imbecile.  And those are his good points.

Brand appears to have a one-note persona: with his wild eyes and mane of hair making him look like a drugged-out hippie, he thinks that by being frenetic he is endearing.  Given how inept he is at everything, how he grew into a moderately mature sober individual in those unseen six months we neither know, believe, or care.

Everything in Arthur goes wrong: the story, in particular the romance between Arthur and Naomi, is rushed, the characters remarkably unlikable, an effort to make the childhood loss of Arthur's father as a reason for his genuinely nutty behavior a cheap excuse for a grown man's irresponsibility, playing Alcoholics Anonymous for laughs, and some pretty lousy performances.

Arthur is just a bad film.

It isn't funny.  It isn't romantic.  It's just a vanity exercise for someone who thinks he's brilliant but who is just hopelessly annoying and elevated to a level he has not earned or is likely to.  You'd think Russell Brand would then be perfect as Arthur Bach since they share similar traits.  However, Arthur at least has the excuse that he is suffering from alcoholism, not a low level of talent.

Allow me one last parting shot: I don't know why Arthur appears to be so terrified of horses, given that Russell Brand looks like one.