Grand Hotel is not in the pantheon of great films. Even among its fellow Best Picture winners, it's an oddity: it's the only film as of this date to win Best Picture without being nominated in any other category. It is however, a brilliant example of an all-star cast in a lavish setting making things greatly entertaining.

We have a galaxy of stars in Grand Hotel with all their stories interconnected into one grand story.

In quick order we're introduced to the various situations the various characters are in: Senf is waiting for his wife to deliver a baby, Kringlein is living it up at the Berlin Grand Hotel because he is dying of an unnamed disease, Preysing must get a contract from Manchester or will face financial ruin, and Grusinskaya's maid Suzette (Rafaela Ottiano) tells the concert promoter and manager that she cannot dance due to an intense melancholy that overwhelms our temperamental diva.  We end this montage with Doctor Otternschlag musing to himself how at Grand Hotel "People come and go, nothing ever happens". 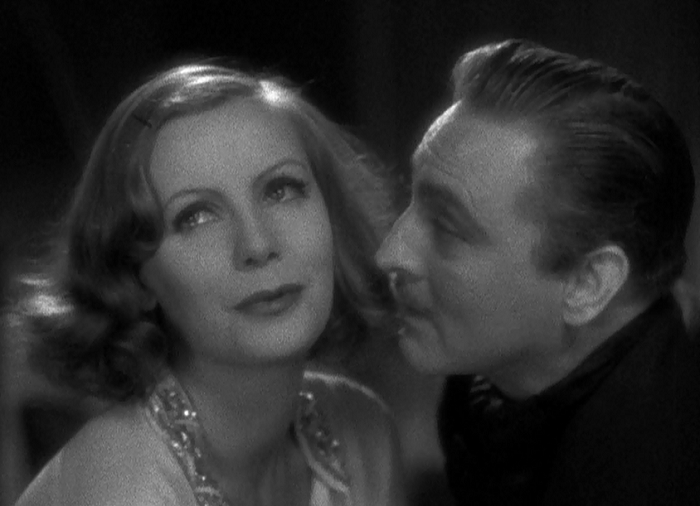 Just as the Baron is about to get away with Madame's pearls, Madame returns after having fled the theater and causing a panic among her entourage.  Grusinskaya tells them, "I want to be alone".  In the depths of her melancholia related not just to her fading career but her lost czarist lover, she is about to do something desperate.  The Baron risks danger by coming out of the shadows to tell her she has much to live for, and that he is in love with her.

Having men come out of the shadows doesn't faze Grusinskaya: she tells him its happened before, and they spend a beautiful night together.  Kringlein has been living it up as well, but knows his time is growing shorter.  With the dancer now passionately in love with the Baron, Grusinskaya can dance again.  She tells the Baron that they can go together to Italy, vacation there, continue their romance.  The Baron agrees, but rejects her offer of money.

Preysing tries to bluff his way to convince investors into a merger by telling them the Manchester deal has gone through even though he knows it hasn't.  After getting them to sign the merger agreement, Presying must now go to England to secure the deal.  Flaemmchen leaves the all-day conference for a date with the Baron, and while waiting, keeps Kringelein company.  Preysing now barges in, demanding Flaemmchen return for more business, primarily of the monkey kind, and assaults Kringelein.  The Baron comes to his defense. 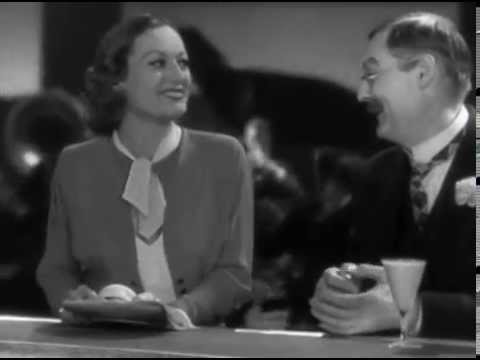 It is now seven p.m.  Presying gets Flaemmchen a room adjoining his, but while she agrees to go to England with him, she plays things to her advantage without actually giving him much if anything that was tawdry.  Grusinskaya has already left to dance like she's never danced before, and Kringelein has beginner's luck in a poker game organized by the Baron.  The Baron comes close to stealing from him, having already rejected Kringelien's offer for money, but in the end cannot go through with it.

There is one mark who hasn't been tapped and who would be easy to steal from.  Preysing catches the Baron in the act, and after an altercation clubs the Baron to death with the phone.  Flaemmchen enters, is horrified at the sight, and flees to Kringelein, who calls the police.  In the end, Grusinskaya leaves for Italy, being kept deliberately in the dark about the Baron's fate, Preysing is arrested for murder, and Flaemmchen, having seen the kindness of Kringelein, goes with him to Paris, in the hopes of finding a doctor who could treat his illness.  They will stay at the Grand Hotel, Kringelein noting that there is always a Grand Hotel somewhere.  Oh, yes, Senf finds he has a new son.

Grand Hotel is if nothing else, lavish to a T, a grand spectacle of sights and sounds.  Director Edmund Goulding manages to not only keep things flowing at a remarkably good pace but also has some great technical flourishes in the film.  The opening in the hotel lobby flows smoothly, allowing us to see nearly all the characters and introduce them and their stories. 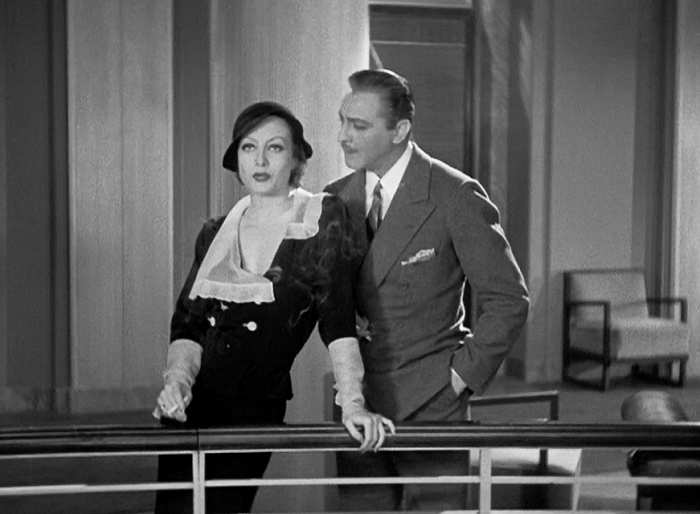 There is also a great interplay between John Barrymore and Crawford as he attempts to charm her and she puts him in his place.  As they lean over the balcony overlooking the lobby, he tells her something along the lines of how she thinks the staff would react if one of them jumped onto their desk from their height.  She tells him she doesn't know, so why doesn't he jump and find out.

Goulding also got some absolutely wonderful performances out of his all-star cast.  As stated, Grand Hotel received only one Oscar nomination, for Best Picture, but what is truly incredible is that none of the actors received nominations for some truly wonderful work.  Chief among them was Lionel Barrymore's dying clerk Kringelein.  His performance is one of true heartbreak for a meek and mild man embracing life just as death is embracing him.  We care about him and his plight, making his happy ending all the more tender.

Following Lionel Barrymore right behind him is Crawford as the stenographer.  She makes Flaemmchen both a woman of the world not above using her considerable charms to move ahead but also vulnerable, aware of what is expected but still optimistic.  Her last scenes with Lionel show us the vulnerability behind her as well as how she has grown to care for Kringelein.  Both know that she's not in love with him, but they love each other nonetheless.  Beery's German accent isn't excessive or exaggerated, and his performance is also first-rate: the industrialist you love to hate.

The central role, the one that ties all the stories together, is that of the Baron, and John Barrymore makes the Baron a character of great tragedy.  Despite himself, the Baron is simply too good a person to take advantage of people: not the ballet dancer he's fallen madly in love with, not the shrewd stenographer he flirts with, not the meek accountant who sees the Baron as his friend.  All we need to know about the Baron is from how he describes himself to Grusinskaya, "I'm the prodigal son.  The black sheep of a white flock.  I shall die on the gallows".  There is a fatalism to him, a belief that despite his low position, he is still a baron, and that his nobleness (and noblesse oblige) cannot allow him to truly take advantage of someone he cares for as he does for Kringelein and Grusinskaya.

Finally, we go to Garbo.  At first,  I was disappointed in what I thought was a very mannered and over-the-top performance as the Grand Diva.  Upon a second look, I changed my view entirely.  Grusinskaya was suppose to be over-the-top, a woman on the verge of a grand emotional crisis, worrying about a fading career and still mourning the death of her great love, the Grand Duke Sergei.  Garbo has beautiful love scenes with John Barrymore (William H. Daniels' cinematography photographing these two simply beautiful people in all their grand glory and beauty), but at the end, when she blissfully goes off to the train station unaware her new love is, like her old love, also dead, there is a genuine heartbreak to her sense of joy.

Besides, who in the end can argue against Garbo's performance when she delivers that immortal line,

in her luxurious Swedish accent.  Here, she communicates this unbearable sense of being forever forlorn, to where nothing will ease her sadness.  "I just want to be alone", she says, not caring about her career or life.  In fairness, Garbo may appear exaggerated by today's standards, but her performance does move one on an emotional level, a woman who yearns to love and be loved but always finds loss rather than love at the end.

There are also some technical aspects in Grand Hotel that add to the lavishness of the production.  Chief among them is Cedric Gibbons' art direction, where the Art Deco design of the lobby echoes the luxury and decadence of Weimar-era Berlin.   Adrian's costumes from the Baron's simple cat-burglar frock to Grusinskaya's elaborate ballet costume should also have received some recognition, as well as William Drake's adaption of his play based on Vicki Baum's novel Menschen im Hotel.

One flaw in Grand Hotel is that Blanche Sewell's editing made some visible mistakes such as the jump between John Barrymore and Joan Crawford appeared to make them move to the same positions twice.  On the positive side is that these mistakes, while quite visible to the naked eye, are soon forgotten when one continues to be swept up in the interlocking stories and lavish setting.

Grand Hotel is a luxurious picture where star power is in full force.  Combining the talents of Garbo, both Barrymores, Crawford, and Beery was a stroke of genius, making the film more lavish and highly entertaining.  There is also some genuinely good acting in Grand Hotel, particularly Lionel Barrymore and Crawford.  Grand Hotel set the standard of what an all-star production should look like, and films ranging from The V.I.P.s to Airport and The Poseidon Adventure and The Towering Inferno owe it a debt of gratitude.

As for Garbo's request, it cannot be granted.  As long as her image is up on the screen, she'll never be alone.