In the interest of full disclosure I will go on record saying that I do enjoy Jason Statham films.  Killer Elite, in that regard, is a success: you get a lot of action scenes, culminating in one where he's fighting while tied to a chair.  In terms of a good movie, Killer Elite is not a success.

Danny (Statham) and his mentor Hunter (Robert DeNiro) are trained assassins.  In 1980 they make a hit on a Mexican target, but Danny encounters an unexpected complication: a child, and this is just too much for him.  He declares this is his last job.

A year later, Danny is in Australia, with a girlfriend, Anne (Yvonne Strahovski), when he gets a letter.  Hunter has been taken hostage by an Arab sheikh after Hunter took, then reneged, on a job.  In exchange for Hunter, Danny must now avenge the sheikh's sons by killing members of a secret military group who killed their sons; he must get them to confess on tape and record their deaths for confirmation.

It's unfortunate that this secret society is The Feather Men, their killing having a light touch.  All these current and former military elites have as their unofficial head Spike (Clive Owen), who is paranoid but realizes that someone is tracking them down.  Then it becomes a game of cat and mouse, though we don't really know which is which.  Danny succeeds in killing the men, but a threat against Anne signals that Danny has one more person to kill.  This gives Spike a chance to get rid of his nemesis.

Killer Elite tauts itself as based on a true story (based on the book The Feather Men by Sir Ranulph Fiennes), and even tells us in the end that both the existence of The Feather Men is officially denied and that the whereabouts of Danny remain unknown.  If the events depicted are true, then reality is a wild and at times confusing thing.  A lot of times, Killer Elite almost played like an unintended farce.  The film kept reminding me of the cartoon Spy vs. Spy, where one group was trying to outdo the other and bungling their tasks often.

Take for example when Spike sees who is following and targeting his group.  He then starts following Danny, who is supposed to be following Spike.  A lot of Killer Elite is like this: you get a plan to terminate someone but then the one pursuing becomes the one pursued and sometimes the other person is the one getting bumped off.

It makes one wonder exactly how expert these Feather Men are: for all their contacts and inside sources and great training they can't seem to put together the connection between the two men getting killed or this outsider doing the killing.  In fact, whenever Spike meets with the Feather Men, they look and act like the neighborhood association discussing how high the hedges should be allowed to grow.   Even worse, Danny and his crew don't appear to either know or realize that a cabal of ex-military elites would be after them.

Statham does what he does best: squint, gives us a mean face, and fight.  In fact, Jason Statham is so cool that when his partner is attempting to escape a group of bees or hornets, Statham just waves them away, continuing to stare out at the man foolish enough to try to take him on. Owen is someone who appears to want to go into action films but can't seem to convince audiences that he can be an action star (examples: King Arthur, Shoot 'Em Up, The International, Killer Elite).  I think he can be one, and he certainly is a good actor.

I don't blame him, but Matt Sherring's script that gave him nothing to build on.  Both Statham and Owen are shown to have private lives, but nothing ever comes from it.  Early in Killer Elite, we hear Spike's wife hounding him and a baby crying, but after that scene, we never hear from them again.  Did he send them away?  Did she leave him?  Does he care?  Do we? 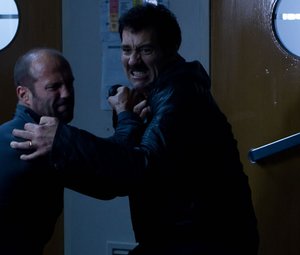 Likewise, Anne is just there to give Danny a sense of having some emotional attachment.  From time to time, we wander into flashbacks of their life together in Australia, but it isn't until the third act that she even becomes remotely connected to the plot.  Danny takes Anne to Paris for his one last, last hit, without telling her anything, in order to have Hunter protect her while he takes care of business.  Naturally, she's oblivious to most of what's going on: she knows something is up, but being a hit man never enters her mind.

In regards to DeNiro, he's there just as what is called a plot device.  In the nearly two hours of Killer Elite, he probably isn't in the movie for more than half an hour at the most: in the beginning, a couple of times in the middle, and in the end.  For the most part, his role appeared almost incidental.  I suspect he had a good time.

One thing that was an endless bother to me was the score by Reinhold Heil and Johnny Klimek.  It's amazing that two people could make music that was so loud and overbearing that it hit the viewer over the head and ears so often that it became endlessly frustrating to enjoy.

Killer Elite is pretty much a low-rent action film though there were some good action moments.  The plot is trying too hard to be complex and only ends up being really convoluted with betrayals and chasing and trying to figure out exactly who or what The Agent (Adewale Akinnuoye-Agbaje) is.  A little more streamlining in the story to where it becomes a game of outwitting would have served the story better.

On the whole, Killer Elite actually manages to not make the best use of Jason Statham, which is amazing given how Statham's main talents are in scowling and growling.