THE IDES OF MARCH

We should know that politics can be a dirty business. The Ides of March somehow doesn't appear to know that.

Based on the play Farragut North by Beau Willimon (who co-wrote the adaptation with Grant Heslov and director/co-star George Clooney), The Ides of March is suppose to be about the corruption of an idealist into another apparatchik bent on winning at all costs.  The Ides of March becomes instead an an attempt at showing the cold and cruel world of American politics.

Stephen  (avant-garde actor Ryan Gosling) is the idealistic junior campaign manager for Pennsylvania Governor Mike Morris (Clooney).  They are in the midst of the Ohio Democratic primary, and Gov. Morris' inspirational speeches make even Stephen (who despite being merely 30 has worked on many a campaign) believe Morris is "The One".

Stephen works under veteran campaign manager Paul (Phillip Seymour Hoffman), who is desperate to get the endorsement of former candidate Sen. Thompson (Jeffrey Wright), whose delegates can ensure Morris' nomination.  This does not sit well with Tom Duffy (Paul Giamatti), who is working for Morris' opponent for the Democratic nomination.  Duffy persuades Stephen to take a meeting, where he offers our idealist a job on his team.  Stephen rejects it, but does not tell Paul about the meeting until after a debate.

Meanwhile, Molly (Evan Rachel Wood), an intern and daughter of the Democratic National Committee head, is flirtatious with Stephen.  Curiously, he and Molly begin a sexual relation, though it's more a friends with benefits scenario.  However, after a tryst Stephen inadvertently picks up Molly's phone, and is shocked to discover it's from Morris.  Why would the Governor call Molly at 2.30 in the morning?  Well, it seems that after Morris won Iowa, a celebration turned into a one-night stand entre Morris et Molly.  To complicate matters, Molly needs $900 for reasons unknown.

Stephen now has three battles to fight: trying to help Molly out of her mess, the Ohio primary, and the inquisitiveness of New York Times reporter Ida (Marisa Tomei), who is threatening to reveal the meeting between Stephen and Duffy.  Paul dumps Stephen from the campaign, but after Duffy rejects Stephen's offer to join his campaign, and Molly's exit, Stephen now will do anything to get back in the game. 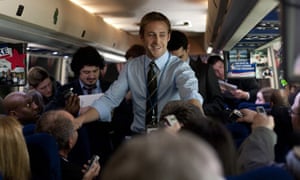 I'm not a particularly political person, but The Ides of March isn't a story that is revelatory to the machinations of the political world.   I figure that the presentation of a candidate will always put the best spin on their policies and persona, so why would Morris be any different?  It isn't cynicism on my part, just cautious and cool detachment.  However, The Ides of March asks me to believe a great deal about both the story and the characters that the script simply cannot do.

For example, it asks me to see Stephen as this idealist who sees in Morris an almost messianic figure whose election will mark, to quote a great speaker, "the moment when the rise of the oceans began to slow and our planet began to heal".  However, as portrayed by avant-garde actor Gosling, Stephen never looked or sounded like a True Believer, someone who in his heart saw Morris as an almost Messianic-character.  Instead, avant-garde actor Gosling sounded like an actor delivering dialogue.

With avant-garde actor Gosling, there isn't a spark, an enthusiasm for Morris.  Instead, there is a coldness, a distance, an aloofness to Stephen's work on Morris' campaign.  Therefore, since I never believed Stephen was a True Believer, I never saw his corruption and downfall to be real.

In The Ides of March, Stephen, for all his high-powered wunderkind persona, actually appeared to be quite dumb. When Molly says that she needs $900, Stephen literally asks her, "$900 for what?"  At that point, I blurted out loud, "Geez, even I know," so how he didn't is beyond me.  It also makes me wonder why he would need to take the Morris campaign petty cash for Molly's needs, since I figure he had some money.  What, he couldn't borrow money from fellow Morris devotee/campaign worker Ben (Max Minghella)?

When Ida confronts Stephen about his secret meeting with Duffy, Stephen couldn't figure out who had leaked this information, which was strange since I figured out who did it almost instantly.  To misquote Columbo, it's always the one I most suspect.  The 'Deep Throat' to this 'scandal' which really isn't to my mind that big a deal, is so painfully obvious and I'd argue, predictable, that I couldn't believe Stephen wouldn't realize it sooner.

This 'enthusiasm gap' goes with Clooney's performance as Morris as well.  As I heard Morris speak and saw how he spoke, I can't imagine how someone who spoke in platitudes could have inspired such passion and/or devotion among the rank-and-file Democrats.  In truth, I found the character of Governor Morris to be remarkably dispassionate in his speaking, almost as if he has to force himself to say things that sound vaguely 'inspirational', even though they never sounded 'inspirational'. 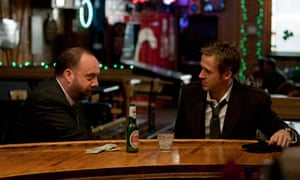 I can't argue against any of the other performances.  They were efficient, if not inspiring.  Giamatti was still the slightly tense and harried character he was in Cinderella Man, while both Hoffman and Minghella were underused as both actors and characters.  However, nothing beats Tomei in the Underused Division: she was in probably three to four scenes and didn't appear to be anything more than a plot device to get the two 'scandals' (the secret meeting and the Iowa one-night stand) tied together into the plot.

I won't argue on the technical aspects of The Ides of March with one exception.  Alexandre Desplat is a most curious case as a film score composer: I loved his scores for The Queen and The King's Speech, tolerated his score for Harry Potter & The Deathly Hallows Part 1 & Part 2, but disliked his work for The Ides of March.

I think it has to do with the fact that like most of The Ides of March, it was remarkably predictable and self-important: on opening the film with drumming I wrote 'Oh, drumbeat signals importance of film', and when we hear a solitary trumpet I wrote 'Horn solo signals this is Important Moment in Important Film'.  I'm never a fan of scores that call attention to themselves, and are clichéd; seriously, military-style instrumentation for a political film?

I digress slightly to say that The Ides of March at one point comes dangerously close to farce.  When Stephen confronts Morris with all that he knows, avant-garde actor Gosling looked slightly possessed, his eyes expressing not rage or anger or hurt but a near-demonic, almost psychotic look.

The Ides of March is the type of film that thinks its saying great and profound things when in reality it doesn't say anything we don't already know: politics corrupts even the most seemingly incorruptible, and does it is a remarkably predictable way.

I never believed Stephen was a man corrupted by a desire to win even if Morris' election would be good for the nation: a suggestion of how to ensure kids get free college in exchange for mandatory two-year service either via military or community service, only made me wonder whether this would constitute 'involuntary servitude' prohibited by the 13th Amendment if it were 'mandatory' but now I digress. I never believed Morris to be some sort of inspirational character I would follow into the Gates of Hell.

Ostensibly about Stephen's fall from grace, The Ides of March is really about how a grown man could be both so foolish in how he handles just about everything he's involved with and still be considered a political genius.

There is no need to beware this Ides of March.  However, it's time has come and gone.