It is perhaps the silliest, dumbest, most moronic premise for a major movie this year: a father-son movie built around boxing robots.  It's like Rocky meets Over the Top. or Rock 'Em, Sock 'Em: The Movie.  By all means, the film should not work, and it should be a great disaster.  Somehow, despite itself, Real Steel isn't as ridiculous as it could have been.  This isn't to say that Real Steel is good: in many ways, it's so, so wrong.  However, somehow the film stumbles into an acceptable, if not original, story.

Charlie Kenton (Hugh Jackman) is a wastrel of the first order: shameless, irresponsible, a former boxer now using fighting robots in low-rent places like rodeos to earn quick bucks which he appears to waste given he doesn't appear to do anything worthwhile with it.  His newest robot has been defeated in the rodeo ring thanks to him getting distracted by a cowgirl, and as usual, he skips town before paying off his bet.

It's on the road that Charlie learns that an old girlfriend whom he knocked up long ago has died.  As the father to a child Charlie has never bothered to see or do anything with, he now has to take some responsibility, but he doesn't want a kid to get in the way of getting a new robot that he thinks will reverse his fortune.

Fortunately for Charlie's kid, the child's aunt Debra (Hope Davis) is eager to take the child on full-time as his legal guardian.  Fortunately for Charlie, Debra's husband Marvin (James Rebhorn) wants to take his wife to Italy for the summer with friends, so they strike up a deal: in exchange for money, Charlie will take the child for the summer and will sign away his parental rights.  Everyone except the child wins.

With that, Debra and Marvin leave Charlie's child at his doorstep.  The child, Max (Dakota Goyo), doesn't know this man who clearly doesn't know or care for/about him, but he loves robot boxing.  Charlie uses Marvin's money to buy a new bot, and despite the misgivings of his friend/love interest Bailey (Evangeline Lilly), Charlie goes off to make some money.  Unfortunately for Charlie, Max forces him to take him along.  Charlie quickly books a fight for his new robot, but while both Max and Charlie's friend/roboxing bookie Finn (Anthony Mackie) urge him to take an under-card, Charlie is so cocky he insists on the main event.  Wouldn't you know it: Charlie's robot is crushed, and now Charlie and Max have to find parts to build yet another roboxer (note: I am claiming copyright for the term roboxer/roboxing).

In a junkyard, Max finds a sparring robot named Atom, and somehow manages to dig him out in one night.  To the surprise of everyone, Atom becomes a genuine roboxing powerhouse because he is able to imitate the movements of people, in particular former boxer Charlie.  As Atom begins to take roboxing by storm, father and son soon start enjoying each other's company.  Eventually, Atom faces the Mighty Zeus, the undisputed Roboxing Champion.  One guess as to what happens to Charlie and Max, and if you've seen Rocky, one guess as to how the match ends.

Real Steel might have just as well said in the credits "Inspired by Rocky" given how the match between Atom and the Mighty Zeus ended.  It also would have been honest if they mentioned Over the Top whenever the story focused on the father/son bonding experience as the father continues his sporting career right down to the trailer truck both dads drive in their respective films.

I have no idea if John Gatins was inspired by the two Sylvester Stallone vehicles, the story by Dan Gilroy and Jeremy Leven, or the Richard Matheson short story Steel, which it claims to have been part of the basis for Real Steel.  However, assuming that Gatins didn't realize how Real Steel is painfully reminiscent of one of Stallone's best films and one of his worst, it shows that in truth Hollywood does not have many if any original ideas.

What brings Real Steel down is that the film at over two hours is far too long for its story.  The subplot about Charlie's dealings with the cowboys makes the film run longer, getting the first fight Max is involved in makes the film longer, and seeing the 'cute' scenes of Max doing The Robot with a robot make the film longer; while most of the audience found it hilarious and precious, I found it idiotic.  In fact, we're treated to a few more Robot doing the Robot moments, because somehow we're suppose to believe this is one of Atom's selling points to the roboxing audience. 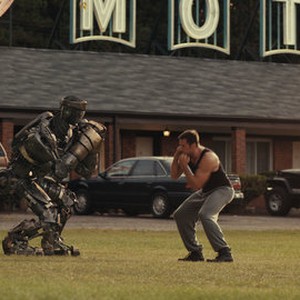 Everything in the film is cliched: Charlie not caring about Max until he sees just how valuable his son is, Atom's rise to the top, the climatic fight with the Mighty Zeus.  Also, the love story between Bailey and Charlie wasn't given much time, and frankly the little boy having a dance-off with a big robot could have been cut.

Finally, there are things in Real Steel that don't make any sense: how on Earth did Max manage to dig an entire robot out of the ground by himself with apparently no tools to help him?

However, despite the myriad of flaws within Real Steel, the film manages to actually be somewhat entertaining.  It can't be because of Shawn Levy's directing: Goyo makes Max one of the most annoying little boys in recent memory, and Levy manages to make little use of Lilly except as a romantic interest that never appears interested or interesting.

If Real Steel succeeds in any way, it is because of Jackman.  He sometimes has been lost in pointless films (Snow Flower and the Secret Fan, X-Men Origins: Wolverine), but every once and a while, he manages to show he is a great talent.  Real Steel doesn't show him as a great actor given his cliche role as the father who learns to love, but he does at least make the premise of the film slightly believable.  He is totally committed to being a sleazy person, but when he comes to understand that he has a son and his son might actually be both smarter and a lot like him, he manages to show the caring side of someone who has never shown anything positive.

Credit should also be given where it is do: the robots do look far better integrated in Real Steel than they do in something like any of the Transformers films.  That at least offers the possibility of the plausibility of the story.

I didn't and probably will never understand why so many people in the audience were cheering Atom on in his climatic fight with the Mighty Zeus.  The whole thing was rather ridiculous from the get-go, and I can never bring myself to cheer for machines.

I think we should all be grateful that Real Steel didn't turn out to be as stupid as the premise or the trailers suggested.  Personally, I've seen this movie before, and I prefer Rocky over a mechanical remake in all but name. Still, I didn't hate it, so there's that.