How Green Was My Valley is a nostalgic look at a lost world, where the traditions of yesterday were erased by the cruel realities of a changing world. The film is one bathed in that nostalgia, where the memories of youth are looked back on in wonder.

Huw Morgan (Roddy McDowall, with voice-over narration by an uncredited Irving Pichel), recalls his early years.  He is the youngest child of the Morgan family, a loving group of proud Welsh miners.  His father Gwillym (Donald Crisp) and mother Beth (Sara Allgood) watch over their five adult sons, Huw, and their daughter Angharad (Maureen O'Hara).

Life is pretty set for the Morgan family: the men except for the child Huw, go to the mines, the women care for the men and keep house, and after work there's time with the family.  Gwillym is the unquestioned head of the house, but Beth is the heart.  One of the Morgan boys, Ivor (Patric Knowles), takes a wife, Bronwyn (Anna Lee), with whom Huw has fallen slightly in love with.  Their marriage is performed by minister Mr. Gruffyd (Walter Pidgeon).  While nothing is overtly spoken, Angharad and Mr. Gruffyd have fallen in love themselves.

Things go as they have always gone in Wales until the mining company reduces wages.  While Mr. Morgan is upset, he has faith that the company owners are humans just like him and thus doesn't see anything nefarious in their actions.  However, his sons do, and dare to question their father, especially on the matter of unionizing the miners.  Mr. Morgan does not care for unions though he cares deeply about his sons and his fellow miners, and is ostracized for his stand against the union and the strike. 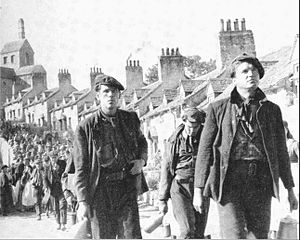 While he bears things as best he can even his own sons leaving home over this, Beth won't.  She calls out the villagers, including her own sons, for behaving so shamefully.  However, she and Huw suffer injuries in a snowstorm, and once recovered, the villagers return to the Morgan home, offering gifts as tokens of forgiveness.

Eventually, the strike is over, but things are now completely different.  Finding themselves out of work, two of the Morgan boys do the unthinkable: they leave the valley for America.  The owner's son asks for Angharad's hand, to which she reluctantly accepts.  Huw goes to a National School, where Beth is displeased to learn he's learning useless things like Latin rather than Welsh or even English, but being from the valley is beaten up.  Ivor is killed in a mining accident, leaving a widow and yet-unborn child.  Despite his education, Huw would rather be at the mines with his father and brothers.  While Mr. Morgan does not like it, he relents.

Two more sons, despairing over lower wages, head off to Australia and New Zealand.  Angharad, who had to go to South Africa with her husband, has returned to the valley, but as a woman of the company cannot go to either her family or Mr. Gruffyd.  The suggestion of something between them forces Mr. Gruffyd to leave the valley, but not before condemning the villagers for their behavior.  Finally, there is another accident at the mines, and we end How Green Was My Valley with the now-adult Huw in voice-over recalling his family as it was.

Voice-over is something I'm not particularly fond of, but John Ford knows how to handle it.  Here, it isn't an issue because it is not used that often and because we know it is the adult Huw's reminiscences.  Moreover, the voice-over doesn't tell us what will happen but only what he felt at the time of the events.  It fills in information for us as opposed to trying to explain everything to us.  Here, as well as in such films as Blade Runner and Sunset Boulevard, we can see the effective use of voice-over, and filmmakers would be wise to study the proper use of it.

It would also serve filmmakers to study how effective Ford's directing was.  For the first fifteen or twenty minutes of How Green Was My Valley, there is very little in form of dialogue.  Instead, the story is carried with Huw's voice-over, the actual actions of the villagers, a lot of Welsh singing, and Alfred Newman's beautiful and nostalgic score.  What is incredible is that a lot of the story is told without characters having to go on about anything.

Take the scene where Angharad and Mr. Gruffyd first take note of each other.  Just with their expressions, their eyes, and James B. Clark's editing, we get so much subtext into their internal emotions.  Same goes for when Huw first lays eyes on Bronwyn: while a bit later we do hear him tells us that was the first time he fell in love, just by how McDowall looks at Lee we know he's been struck with innocent love, while Bronwyn looks on him kindly, but obviously not the same way she would look at Ivor.

In many scenes, such as when the Morgan boys dare to question their father's wisdom, it is just how Ford positions his actors, along with how Arthur Miller's cinematography places shadows to create menace or joy depending on the situation, we see how so much is spoken with just the visuals.

A fine example of this is when one compares Ivor and Bronwyn's wedding to Angharad's.  In the former, there was joy, complete with apparently the entire village joining together in song as they cheer on the happy couple.  There was a real sense of oneness within the community.  Angharad's, on the other hand, was a somber affair, almost like a funeral, and when Mr. Morgan calls for song, the melody is gentle and sad.  We need only see O'Hara's expression, and Pidgeon in the background as he watches her ride away, to know all that needs to be known.

The performances were all-around brilliant.  O'Hara expressed so much with how she looked or didn't look when she turned away, into the conflicted emotions of Angharad.  Crisp as the stoic patriarch showed a man of principles and values, who accepts the changing times with the same stoicism but whom we know has a breaking heart over the loss of his world and his sons.  Pidgeon has one great moment where in remarkably eloquent words he tells the villagers how wrong they were wrapping themselves in Christian cloak to justify their gossip and most unChristian behavior.

We finally go to "Master" Roddy McDowall as he is billed.  In his first American film, McDowall's Huw is a bright and eager young man, truly unaware of the monumental changes going on around him.  For a good part of How Green Was My Valley he is an invalid, having suffered weakness of his legs when he and Beth fall into a frozen river.  There's a beautiful scene between them when she finally has the strength to go downstairs to see him, and it is beautiful and effective because it is underplayed and isn't built up to a big moment.  He has such a beautiful, expressive face, whether it's facing his first day at a brutal school, trying to act manly in front of his widowed sister-in-law, or trying to understand why Mr. Gruffyd has to leave.

How Green Was My Valley is a film about family, of a world shifting away from the love that family and community gives to one where the individual is basically left at the whims of fate and uncaring commerce.  It's themes of family, tradition, and the gradual eroding of beauty both of the natural world and of the family, with a nod to how "Christian" people can sometimes obey the letter of the Law but not the spirit of the Law, is played beautifully.

Yes, it is a film of nostalgia, but it isn't romanticized: the adult Huw understands why things happened, and doesn't shy away from making life in the mines a hard one.

We all can remember how green our own valleys were.

Best Picture Oscar Retrospective
Posted by Rick at 7:53 AM