Jumping the Broom: A Review

The African-American tradition of signifying a couple's marriage is explained to us in Jumping the Broom itself: in slave days, where marriages between slaves were not recognized, the only way to signify a couple had been joined in matrimony was by 'jumping a broom', thus signaling to the slave community that they were wed.  As can be expected by the title, the film Jumping the Broom will be about an African-American wedding.  However, the film is also about family: the good, the bad, and the surprisingly naughty.

Sabrina Watson (Paula Patton) has been going around from one guy to another, but after her latest humiliation she's made a bargain w/God: she won't sleep with another man until marriage, but God has to make it absolutely clear the man she's with is the man she's meant to be.  Wouldn't you know it: right after this bargain, she literally runs into the perfect man: one Jason Taylor (Laz Alonso).  Five incredible months later (the screen uses the word 'incredible'), Sabrina gets a job offer from China, and Jason doesn't want to have a long-distance romance, so there's only one thing to do: he proposes.  The marriage must be done within quickly, so as incredible as it sounds that five months have passed without this happening, it's time for the two families to meet.

The bride's family is from chic Martha's Vineyard.  The Watsons are upper-crust: grande dame Claudine (Angela Basssett), her perhaps philandering husband Gregg (Brian Stokes Mitchell), and her troublesome sister Geneva (Valarie Pettiford).  They have met Jason, but know nothing of his family.

This is more than can be said for the Taylors.  They've never even met Sabrina, and a text message she sends to Taylor matriarch Pam (Loretta Devine) only serves to infuriate our working-class postal worker.

How I fight the temptation to say she went postal, but I digress.

Her best friend Shonda (Tasha Smith) is there to help her through the wedding plan, as is her brother-in-law Willie Earl (Mike Epps) and nephew Malcolm (DeRay Davis).  Most reluctantly, they go up to Martha's Vineyard to attend this rushed wedding, Pam complaining all the way.

Instantly, the upper-crust Watsons and salt of the earth Taylors begin a cold, cold war.  Most if not all the hostility comes from the Taylor side, specifically Pam, though at an especially awkward rehearsal dinner both Claudine and Pam go out of their way to be mean to each other.  Sabrina can do nothing right in Pam's eyes, while Claudine has her own problems: Gregg's 'mistress', Geneva's presence, a 'shocking' family secret revealed and yet another scandal, this one financial.

Finally, Malcolm has to contend with not being Jason's best man, that honor going to Jason's co-worker Ricky (Pooch Hall), while Willie Earl is just trying to get with the fine Geneva but other than that just watch all the weird and wild goings-on around him with a bemused pleasure.

Eventually, the crises come fast and furious: Pam doesn't like anyone not connected to her and is displeased anyone can take her place with her little boy, Claudine is hit by one blow after another by her own family, and wedding planner Amy (Julie Bowen) is just desperate to not only put together a fantastic wedding but not say anything that could be considered offensive to her African-American employers.  The idea of 'jumping the broom' is important to Pam, who brought the broom she and her late husband jumped over and is shocked and angry that Sabrina and Jason won't follow the Taylor family tradition of jumping over it.

However, despite a lot of heartache and confessions, like all good wedding stories, we have a happy ending for all, and even the Electric Slide. 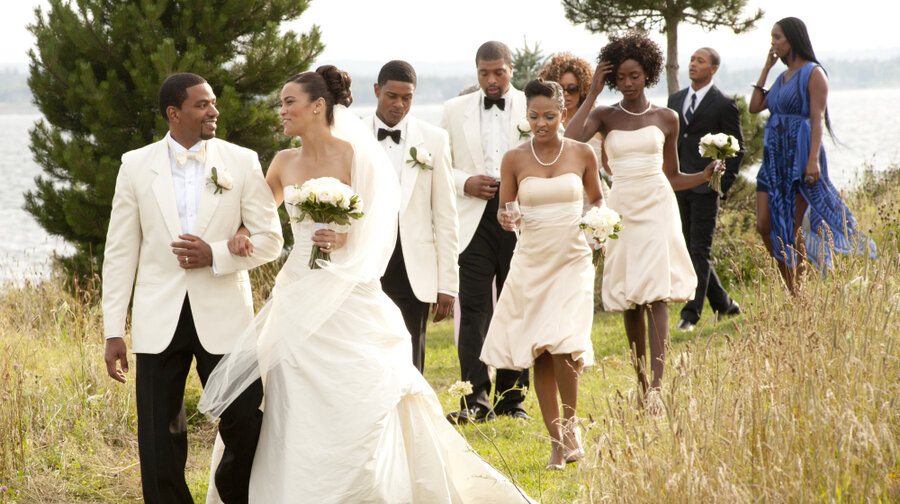 Jumping the Broom has mega-pastor Bishop T.D. Jakes as producer and in a small role as Reverend James, so it's no surprise that there is a certain level of Christianity and commitment to a more positive portrayal of African-Americans in film.

It isn't often that we see black families portrayed as pillars of high society and the concept of no premarital sex.  What makes Jumping the Broom go beyond appealing to just an African-American audience is that the trials and tribulations of weddings and any family drama are relatable across all ethnic and racial lines.

Every group has its own traditions, and each family has its own issues with odd relatives, so Jumping the Broom taps into the joys and horrors of big family gatherings.  In this case, the tradition of 'jumping the broom' serves to show the conflict between these two groups from two different worlds being brought together by their children forming one union.

The performances under Salim Akil manage to keep balance between downright comedy and straight drama.  Patton's Sabrina did at times come off as a bit fluttery and slightly dim, and Romeo never did communicate why he'd want someone eighteen years older, old enough to be his mother.

However, it's the performances of the mothers that show what competent and talented actresses both Bassett and Devine are.  The former exudes elegance, but also the hurt of keeping her secret from her daughter.  The latter makes even her clearly mean-spirited actions almost sympathetic. I say almost because what she did, to use modern parlance, was just messed up.

Epps had the best moments as the humorous Uncle Willie Earl who is also remarkably wise in his advise to Pam (which of course, she doesn't take).

The men were unfortunately underused.  Alonzo was a bit dull as the nearly-perfect fiancee, and Pooch's Ricky got lost in the story to where he was almost non-important as a character.  However, all this is I think more a result of Elizabeth Hunter and Arlene Gibbs' screenplay than with them as actors.

There are a few things that didn't quite work in Jumping the Broom: it's a bit cliche to have Pam show up at the exact time that the Watson family secret is revealed while the sisters are unaware they are being heard; you almost know where and when the revelation will take place.

Actually, you pretty much know where the story is going and it turns into a soap opera: in a line from the trailer which I don't remember used in the film, Amy refers to the weekend as like being in The Bold, Black & The Beautiful.  I also think we could have had more funny moments with Amy and her efforts to integrate herself with her employers while attempting to not sound foolish.