The Demon's Head is a first for Gotham in that its writer is the star of the show, Ben McKenzie.  He's already directed an episode, and now he wants to do more in the creative side of the show.  All well and good.  The Demon's Head has a lot going for it: some fine acting, nice moments of humor, and the always brilliant cinematography.

Therefore, why do I think it the worst Gotham episode so far (or at least the most despicable and repulsive)?

Ra's al Ghoul (Alexander Siddig) is still after the dagger that Bruce Wayne (David Mazouz) bought.  He will not be denied.  Al Ghoul goes after the knife that Bruce has taken to Professor Niles Winthrop (Dakin Matthews) to find out more about it.  While Professor Winthrop isn't in on the whole matter, he starts looking at it, along with his grandson Alex (Benjamin Stockham).  They come across its terrible secret and connection to Ra's al Ghoul.  Just like that, al Ghoul shows up and kills the Professor in an effort to get the knife.  Alex, however, has disappeared, as has the knife.

Detective Jim Gordon (McKenzie), along with Bruce despite Gordon's insistence otherwise, begin searching for Alex.  Ra's also begins his search, getting his 'pet' Anubis, a crazed man who behaves like a dog.  Gordon knows his former fiancee, Barbara Kean (Erin Richards) knows something, but she ain't tell.

Meanwhile, poor Edward Nygma (Cory Michael Smith) is still trying to get back to his old Riddler ways.  He's having an awful time of it, trying to come up with various riddles to taunt his nemesis, Oswald Cobblepot aka Penguin (Robin Lord Taylor).  Nygma is reduced to hiring a pair of rappers to give Oswald his clues, but his riddles are unintelligible.  Cobblepot eventually gets Nygma to reveal himself, mocks and taunts his former thwarted love, but decides to not let Victor Fries aka Mr. Freeze (Nathan Darrow) freeze him.  Penguin figures seeing Nygma in his condition is punishment enough for him, and Penguin takes great delight that his rival cannot form a coherent persona...and tells him his riddles suck. Penguin has another issue: the return of Sofia Falcone (Crystal Reed).  He's convinced she is here to retake power for the Falcone family, but she insists her goals are all legitimate.

These protests appear genuine, as she continuously insists that the capos who have been underground since Penguin took over not address her as "Dona".  However, Penguin used her as bait to draw the capos out, and has Victor Zsasz (Anthony Carrigan) execute them.

It's here that we see she is her father's daughter: she tells Penguin that if it had been her father, he would have shown Sofia to 'publicly' support the new regime and gotten them over to his side instead of just offing them.  Slightly perturbed, he insists new rules for a new regime.

Sofia still has designs on Gordon, and he could use the distraction.  He and Bruce had finally found Alex, but so had Ra's and his minions.  Bruce manages to hold on to the knife, but it does mean that Ra's slits Alex's throat.

Bruce feels great guilt over that, but them's the breaks, I guess.

As I said, The Demon's Head has great acting, particularly near the end with RLT and CMS.  Seeing these two bitter rivals go at each other verbally is a great delight.  We see two strong actors at the top of their game, particularly for Taylor, who not only manages to face off against Nygma but also shows a wry deadpan humor when dealing with Nygma's rappers or Sofia's apparent timidity.

Carrigan too does great work in making Zsasz into a humorous character.  He's certainly a master assassin, but he almost makes Victor almost innocent and childlike in his manner.  Whether it's in his enjoyment of the rap, bobbing his head along to the beat...before suggesting the rappers be tortured, or how he confuses himself with Victor Fries, Zsasz is actually a very funny character.

As a side note, given how much I like Mr. Freeze and Darrow in the role, it's such a shame he was so underused. 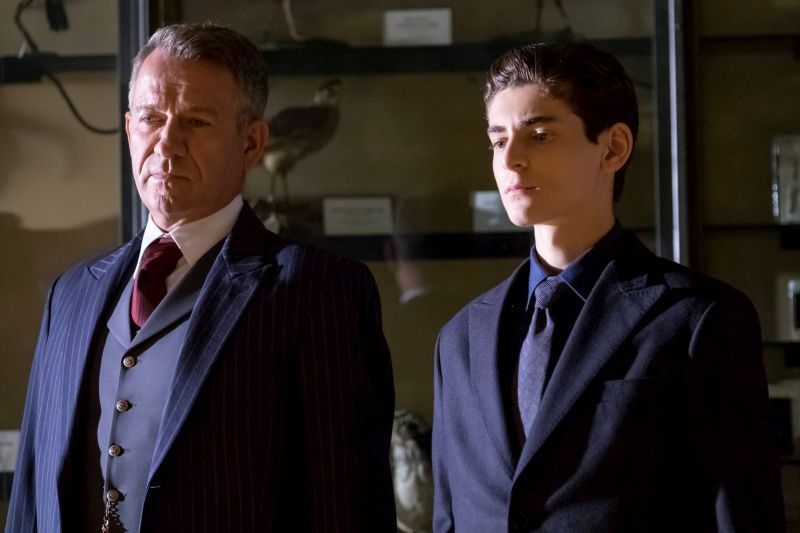 Siddig does a great job as Ra's al Ghoul, and he's even given a chance to play a more 'civilized' figure when he tries to pass himself off as a 'Minister of Antiquities'. Mazouz continues to bring a great complexity to Wayne, whether it's in his pursuit of Ra's or the guilt he suffers over the fate of the Winthrops.  He is matched by Brockham, who brought a realistic portrayal to Alex.  He tells Bruce that he is 'weirdly cool', as apt a term for Master Bruce as can be found.

Before we get to the main reason I am voting down The Demon's Head, let's talk about some things that probably would have put this episode down.  I'm not sure if McKenzie thought the sight of the man-demon dog chasing a dinosaur bone straight out a window was meant to be funny or not, but it was slightly silly.

Then again, the sight of the man-demon dog was already less frightening and more laughable.

Gordon getting it on with Sofia also seems wildly silly.  Really, what does Gordon do to bring all these crazy broads to him?

At the library, Gordon manages to stop the hunters by pushing the shelves and make them collapse.  Apart from being clichéd, it is highly impractical.  Perhaps it's the librarian in me, but shelves are pretty much bolted to the floor nowadays, and I think have been for decades.  I know, I can't be too technical, but something about that just didn't sit right with me.

As odd, or even silly as the whole 'mad man/dog chasing a dinosaur bone' was, or the 'domino bookshelves' bit was, it was the killing of Alex that bothered me, even disgusted and revolted me to no end.  Already the killing of Professor Winthrop by Ra's was a bit graphic (though tame by Gotham standards).  However, it is Alex's killing that turned me off, so much so that I questioned whether to keep watching both The Demon's Head and/or Gotham. I'm surprised that they didn't show a grown man slit a teen's throat.  This show has shown a man literally blown up.  It's sometimes been almost sadistic in its violence.  Therefore, why did they opt to not show a teenager getting slit across the throat?

Maybe, just maybe, it's because such things are really over the line, even on Gotham.  It would have been far too brutal, but that's what they did: kill a child.  Again, that just so bothers me.  I know it was done for a reason (to give Bruce Wayne a greater sense of guilt and responsibility), but this is the rare moment when maybe, they could have held back and had Alex merely injured.

They've brought back Alfred, Selina Kyle, Jerome Valeska, and Fish Mooney back from the dead.  Oswald has been presumed dead...twice.  Butch Gilzean was literally shot point-blank in the head (graphically so) and is going to make a return appearance.

Don't tell me that such things are 'logical' but not having Alex survive a throat slitting isn't.

This is clearly on McKenzie.  It was his artistic choice to have Alex killed.  I found it all too disturbing.

The Demon's Head has some excellent moments to it, particularly the acting of Mazouz, Siddig, Taylor and Smith. However, that whole 'killing kids' thing was a major factor in saying that I would not want to watch this episode again.

Anubis falling to his (presumed) death by plunging to his death after chasing a dinosaur bone out a museum window didn't help.

Next Episode: The Blade's Path
Posted by Rick at 3:34 AM