The Bachelors: A Review 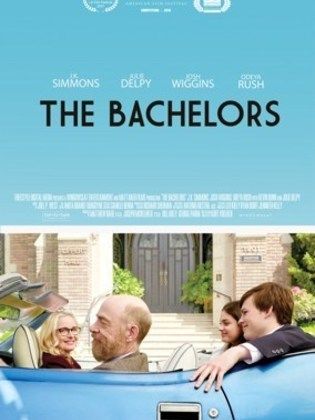 The Bachelors, I'd argue, is a bit of a misnomer.  Yes, technically the Palet men are 'bachelors' in that they are both unmarried.  You can even say that 'bachelors' could tie in to their educations.  However, would Widower and Son have been a better title?

The Bachelors is a good film, respectable, though not groundbreaking from a lot of formulas that people have seen before.  That is a negative.  The Bachelors does have some excellent performances and one breakout performance that elevates it.

Bill Palet (J.K. Simmons) is a widower still in deep mourning for his wife.  One day, he tells his son Wes (Josh Wiggins) that it's time to move, so across the country they go, to California where a frenemy has a school where Bill can teach math and Wes can attend.  Wes is not thrilled to learn he has to take a sport, so out of his options he takes cross-country, and isn't adept at it.

Bill, and to a lesser extent Wes, live but are not alive, the grief still hanging over them.  Into their worlds come two women.  For Bill, it is Mademoiselle Carine (Julie Delpy), a French teacher whom he helps escape the persistent coach.  For Wes, it's Lacey Westman (Odeya Rush), a troubled girl who comes to his all-boys academy along with other girls to take some classes.  As it so happens, Wes is a master at French, and Lacey needs help to get her grades up.  Mademoiselle Carine appoints Wes to be Lacey's tutor, and Lacey, who has a reputation of being a dark, oddball-like figure, makes it clear nothing will happen.

Bill continues to struggle with his grief.  The various pills his therapist prescribes don't do much for him, and Wes continues to run and feel his way around the temperamental and self-destructive Lacey, whose parents are locked in open warfare.  There are moments when both rise, but even after Carine and Bill share an intimate night, Bill's grief overwhelms him.  What was only emotional now becomes physical, as he collapses and even goes through electroshock therapy to get him to live.

Wes, who has endured much, finally explodes in a torrent of rage and hurt at his catatonic father, and this is the catalyst for Bill to force his way out of his grief.  Lacey also finds true comfort, even love, with Wes, as does Carine, with the four of them finding hope and the joy of life.

As I said, a lot of The Bachelors has plot points and tropes that one has seen in other films.  You have the 'troubled' teen (which is the polar opposite of the Magical Pixie Dream Girl).  You have the Droll Comedic Lines where people speak to each other to the point of being more rude than blunt: Bill's frenemy Paul (Kevin Dunn) tells Bill to get a therapist so that, as the school's director, he looks like he cares about his staff.  You have Annabelle (Kitana Turnbull) the pixie little sister who is wiser than her elders.  You have 'witty banter' between characters.  You have 'quirky' situations: Lacey gets Wes a new passenger side seat for his car, not realizing that it's the driver's seat and thus, he's forced to install it with the seat facing the backseat.  You have the 'wacky' friends to Wes, social misfits whom he essentially has to accept or not have any friends.

Writer/director Kurt Voelker is not stretching new scenarios.  Every beat you expect to be hit is hit, and The Bachelors runs a well-crossed course.  That does not make it bad.  It doesn't even make it predictable.  It just makes it a bit standard.

With that said, The Bachelors is still worth seeing because Voelker got a top-notch cast to work with.  Standing above them all is Josh Wiggins as Wes.  Wiggins is more than able to hold his own against veterans like Delpy and Simmons, neither of them slouches in the acting department.  His Wes is a real, natural character.  He plays Wes as a normal teenager forced into tragedy and doing his best to live with it.  Wes isn't witty, or sarcastic, or full of quips.  What he is is a good kid, navigating loss and burdens that he has no control over.

Wiggins' best scene is when as Wes he is having dinner with the zombie of a father Bill has turned into.  Finally, all the rage and hurt and even fear that he has about losing his father after having lost his mother explodes.  What is really wonderful and incredible about this scene is that it is so natural and true.  Wiggins does not make it a big, showy performance.  He builds to it, showing that Wes tries to control himself but cannot anymore.  He shows that he does love his father but cries out to him too, desperate for a parent to stay when one is gone physically and one gone mentally.

The most comparable performance to Wiggins is that of Lucas Hedges in Manchester by the Sea, another young actor whose character has to find his way through grief, pain and loss with an adult who cannot give him the emotional support he needs.  Wiggins in The Bachelors has a strong calling card to a great career, one where his talent is barely being tapped.  He may join Hedges and the late and much-missed Anton Yelchin as a young actor who with good parts and good direction may have a long and successful film.

Josh Wiggins alone makes The Bachelors a worth watching film in a performance that should make people take notice.

Simmons is reliable as the widower Bill, one who moves through life but has stopped living in it.  Perhaps because he is consistently good it's hard to say anything bad about his performance, but it also is hard to say it is anything as strong as Wiggins' work.  Rush took a character that isn't anything new and did good work as well, overcoming the limitations of Lacey into a good performance.  Delpy, I think, was slightly underused, but she was luminous, elegant, and wise as Carine, an intelligent woman who sees so many people around her hurting and in her calm, gentle manner, helping them be better.

The Bachelors is respectable, nothing more, nothing less.  It covers ground that has been much-traveled in other films.  However, it has a fantastic performance by Josh Wiggins, a young actor whom Hollywood would be wise to nurture into a career to showcase his talent.  The film is a bit familiar, a bit cliched, but the acting in it does it wonders.