Gotham: They Who Hide Behind Masks Review 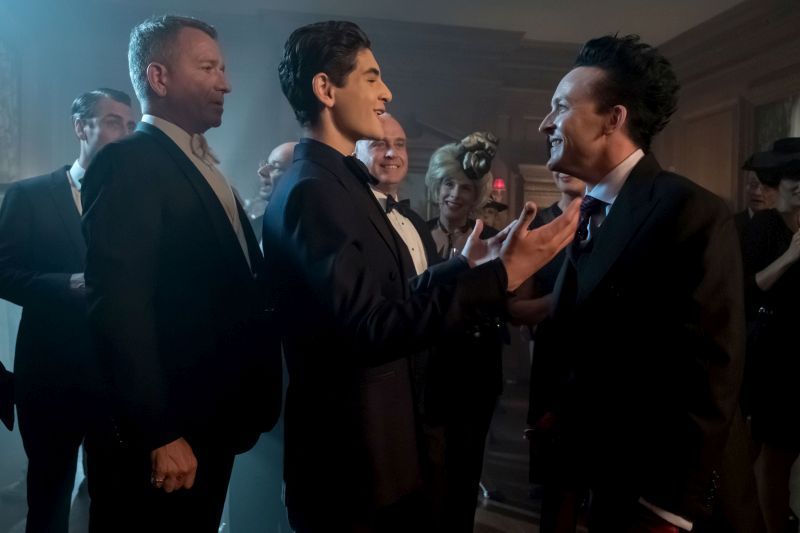 GOTHAM: THEY WHO HIDE
BEHIND MASKS

Again, I go back to the idea that Gotham was not going to be a Batman origins show.  That caused, if memory serves correct, many a Batman fan to dislike the series, as if introducing villains old enough to be the Dark Knight's father wasn't bad enough.  From what I was able to see of They Who Hide Behind Masks, the latest Gotham episode, it looks like the idea that Gotham isn't going to cover the rise of our vigilante proved false.

Our young Master Bruce Wayne (David Mazouz) is learning how to be a vigilante.  That means trying to pass himself off as an ordinary kid while doing reconnaissance work aboard a ship, and not doing a great job of it.  It also means earlier trying to stop a thief from stealing from another thief.  He's not doing a great job of that either, meaning his loyal manservant Alfred (Sean Pertwee) has to bail him out.  Alfred also gives him some acting advise, and now Bruce, who at heart is a good kid, is slipping into the role of a cocky, obnoxious brat.

Part of the act involves being a jerk in outbidding Barbara Kean (Erin Richards) for a particular dagger which she has been tasked to get: The Dagger of King Balahsi.  Bonkers Babs first tried to get her protege Selina Kyle (Camren Bicondova) to steal it, but that didn't work.  Then she goes to her frenemy Oswald Cobblepot aka Penguin (Robin Lord Taylor) to get it, but no dice: he is going to auction it off.  Wayne knows what Penguin doesn't and what Bonkers Babs is unclear of: that dagger is important to Ra's al Ghoul (Alexander Siddig), who was tasked to give it to his 'heir' after he is revived in 250 A.D. Arabia.

Obviously, Ra's has been searching for some time now.

Penguin has his own problems.  Someone has gotten his enemy Ed Nygma (Cory Michael Smith) out of his ice tomb, and he's none too pleased.  That someone ends up being a Riddler super-fan, who has an obsession for Riddler, whom she considers the greatest master-criminal of all.  As part of her effort at having rescued Nygma, she insists on being his sidekick, even having created an outfit worthy of a cosplayer and naming herself 'The Riddlette' (Ilana Becker), real name, Myrtle Jenkins (who if memory serves correct went to school with Nygma).

She, however, is puzzled and worried that perhaps being locked in ice has made him less than what he was.  Even the simplest riddles are hard for him: answering 'zebra with a hole' when asked 'what is black and white and read all over?' among his other too literal answers for the riddles.  Despite her worries, his body has recovered quite well.  His mind...well.

In all this, Detective Jim Gordon (Ben McKenzie) goes to 'Miami' to get the help of Don Falcone (John Doman).

As a side note, wherever he went, even in sepia tones, looks nothing like 'Miami'.  I don't think the name of the place is given, but its look makes me think it's San Juan or Havana.  Yet I digress.

Don Falcone, a dying man, declines to help.  However, perhaps Gordon can get aid through a woman clearly interested in him: Mob Princess Sofia (Crystal Reed).  She even shows up in Gotham, and she has plans and designs of her own.

Things come to a head as Riddler still remains missing, Wayne awaits Ra's return, and Ra and Bonkers Babs start getting it on. 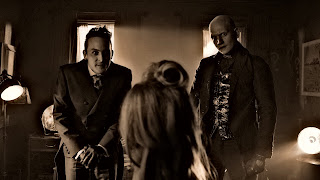 Part of my difficulty with reviewing They Who Hide Behind Masks is that my recording cut off when Sofia arrived, and whatever came afterwards was lost.  However, there was a great deal of good and not-so-good in the episode.

In the not-so-good part was the Sofia-Gordon bit.  Why, oh WHY is it that almost every woman we meet is instantly attracted to Gordon?  Babs, Lee, Valerie Vale, and now Sofia.  It's almost as if Gordon has some sort of sexual charm that bewitches any woman he meets.

Perhaps it's just me, and perhaps she will develop, but part of me isn't thrilled with the idea of seeing another 'Mafia Princess' try to use her allures to take power.  It's no slam on Reed, who is starting out quite well, but hopefully this storyline won't slip into farce.

There is also the curious case of The Cat and the Bat.  The brief scene between Bicondova and Mazouz was strong, but I find it hard to believe that, given how much Selina needs to impress Bonkers Babs, she would so quickly and willingly walk away from Wayne Manor.  The Selina I know would have tried to have fought Bruce for the Knife, so seeing her take a hike was a surprise.

In the 'good' part are the performances.  I don't think Anthony Carrigan and Victor Zsasz has gotten enough credit as he should get for being quite funny.  Zsasz is very menacing and dangerous: the master assassin who is now Penguin's aide-de-camp, but he can also be camp himself.  As RLT rants and rages about seeing Nygma out of his ice prison, it takes Carrigan's perfect delivery to add a punchline.  "I don't know...it opens up the place," he says in observing the now-absent Riddler.  Something like this would surely enrage Penguin, but Carrigan makes it sound natural, almost innocent, and certainly devoid of any maliciousness.

In her brief time, Becker made Myrtle into almost a spoof of fangirls/boys, and the humor she brought to her 'Riddlette' was well-needed.  I've heard people want to cosplay as her, meaning they will make a costume of a character who in essence was created as a gentle mocking of the fans who cosplay as one-episode characters.  Would that count as meta?

It is really Mazouz who now has taken full center stage.  He pulls off the efforts to play someone so different from the real Bruce, and we can see that slowly, steadily, surely, he is slipping into his various roles.  Mazouz is turning out to be one of if not the best Bruce Wayne.  Credit too for Pertwee's Alfred, mentor to the young Master Bruce.

On the whole, They Who Hide Behind Masks is another strong episode, with a more focused Gotham charging into what looks like a major storyline: Bruce vs. Ra's al Ghoul.  Where our Mob Princess fits in remains to be seen.

Next Episode: The Demon's Head
Posted by Rick at 10:10 AM