Class Episode One: For Tonight We Might Die Review 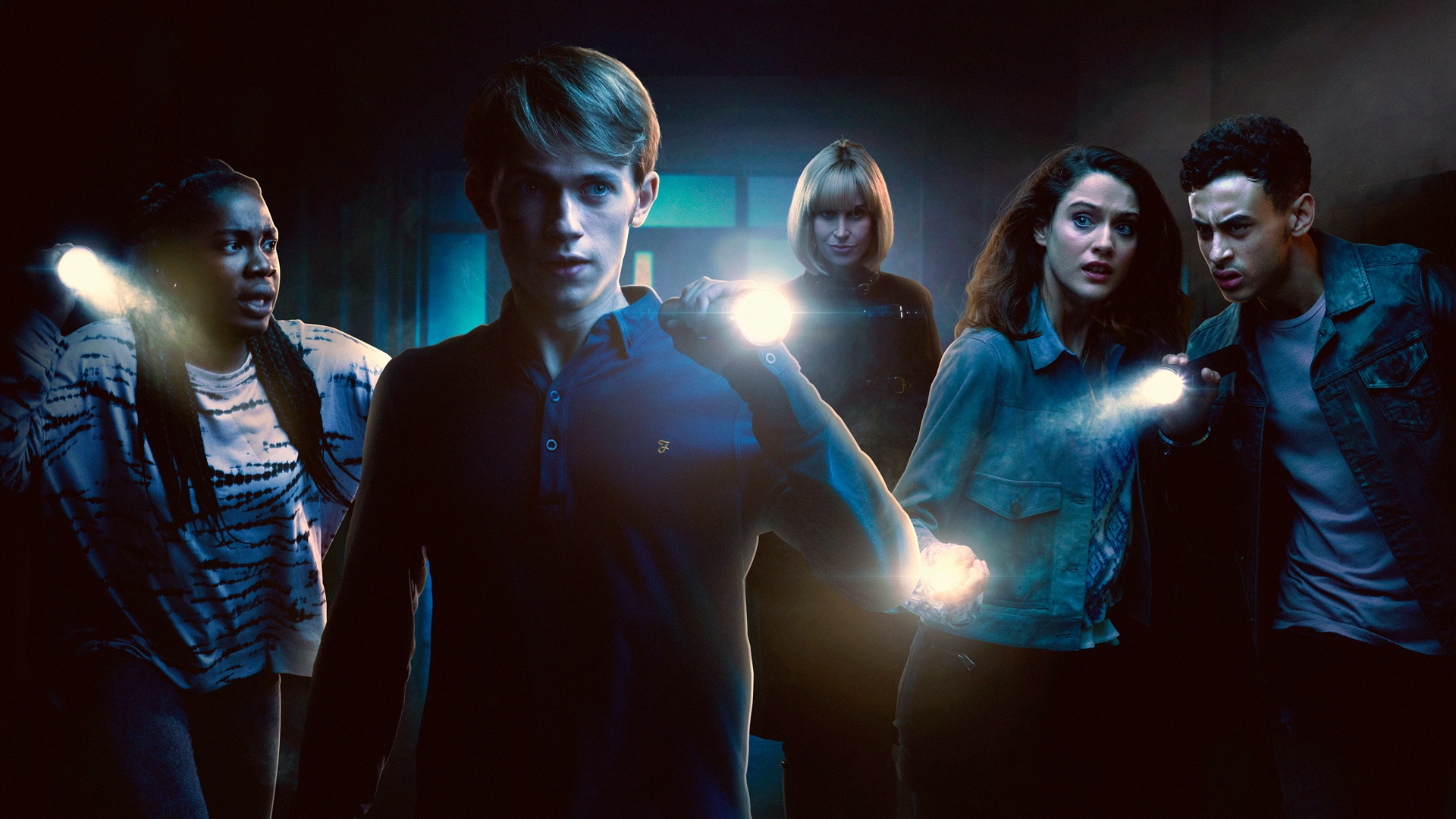 Doctor Who has attempted several spin-offs: K-9 & Company, Torchwood, The Sarah Jane Adventures, and now Class.  So far none of them save Torchwood have had much success in Britain, let alone outside.  Will Class be able to branch off into its own expanded universe?  Judging by the premiere episode, For Tonight We Might Die, Class will end up being dismissed in more ways than one.

Jumping into things right away, a student has disappeared from Coal Hill Academy.  We then thrust into our cast.  There's Charlie (Greg Austin), who claims to be from Sheffield but seems a bit clueless about things.  There's Ram (Fady Elsayed), the cocky football (aka soccer) star.  There's April (Sophie Hawkins), the 'nice' girl who can't get anyone to help her with setting up for Prom (which, given the dialogue, is an American import into the British education system, though being neither British or a high school student, I can't verify independently).  There's Vivian (Tanya Adeola), the highly intelligent and, to use a term I'm still puzzled by, 'woke' student who skipped a few grades.  There's Matteusz (Jordan Renzo), Polish immigrant who is also openly gay despite very conservative parents.

This will be important.

All of them are in the class of Miss Quill (Katherine Kelly) an acid-tongued teacher who delivers quips/character exposition with an angry tone. Sample lines: on April "the answer to the question, 'are spinsters born or made'?", on Ram "one who hears silent applause every time he walks into a room".  She doesn't say this to herself.  She says this to the entire class. 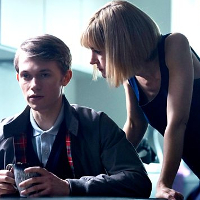 The disappearance of our student is eventually tied in to Charlie and Miss Quill, who are living together.  No, it's nothing like that, no "Lolita"-type scenario (which in my view would have livened things up, but I digress).  The student's death is connected to the shadows, shadows which begin pursuing the other students save Matteusz, shadows which are connected Charlie & Miss Quill.

After April is attacked while decorating for Prom (which she speculates could come from the word 'Promise' or 'Promenade'), we learn the truth about Charlie.  He is actually an alien, and a Prince to boot.  He is the last of his kind: a Rhodian who was pursued by the Shadow Kin.  Miss Quill too is an alien from the same planet, a Quill.  Here is where things get a bit murky.

Prince Charlie insists that Quill is a terrorist who sought out to destroy the Rhodians.  Quill insists she was a freedom fighter battling the domineering Rhodians.  One man's terrorist is another man's freedom fighter, I suppose.  In what Quill calls slavery and Charlie calls punishment, Quill is forced to be Charlie's bodyguard.  At a most opportune time since the Shadow King Corakinus (voiced by Paul Mark Davis) has tracked them down to Coal Hill (hence all the attacks).  It was only through the intervention of The Doctor (Peter Capaldi in a guest spot) that saved them, leaving them the last of their kind.

Quill has a rather vicious little streak to her: the gun she uses to fight the Shadow Kin ends up killing the user as well (hence, the missing student).  Charlie steps in to save April from a similar fate, but somehow her heart and Corakinus' are now joined.  Into all this comes that frightful experience: a night at the other BBC Proms.

Charlie can't understand why Matteusz's parents would be unhappy with their son going out with another boy, and Ram's dad is more concerned he not missed football practice than on his going out with a non-Sikh girl.  April's handicapped mother just wants her to have a good time, while Vivian's mother relents in letting her little girl go to Prom.

As if all this isn't enough to make these kids a bit flummoxed, the Shadow Kin come and attack.  They kill Ram's girlfriend and chop his leg off.  The Doctor comes in to save them all, though despite having lost his leg below the knee Ram manages to knock Corakinus' back through the tear in space.  Now the Doctor tasks these kids, along with a very unhappy Miss Quill, to protect Coal Hill from alien attacks.  We also learn that the Cabinet of Souls, a central part of Rhodian religion that Charlie managed to take with him in their flight from Rhodia, is not empty as he claimed.

It is indeed filled with the spirits of all the dead Rhodians, and he, Quill, and Corakinus know it can also be a weapon.

As I look back on For Tonight We Might Die, I do wonder if Class had any real idea of who would be the target audience.  Ostensibly made for teens, I'm not sure Class, based on this first episode, really knew who or what it wanted.

The graphic violence is too intense for children.  The characters are too removed from adults to have them relate.  As for teens, well, it's a mix of the two.

One issue is that writer Patrick Ness opted to do a rush job in introducing everyone.  There really is no buildup to any of the mysteries (while I haven't seen any of the other episodes yet, I'm venturing a guess that the missing student, Kevin Williams, is never going to be brought up again.  I might be wrong, but given he was just the 'trigger' to get things rolling, I'm not holding my breath).

Ness is writing things that don't appear real, and he at times makes things worse by attempting to be so politically correct.

Early on, Vivian and April are having a conversation about going to Prom when Charlie walks by.  April remarks she's going to ask Charlie to Prom, and here Vivian says that they've 'failed the Bechdel Test'. For those not in the know, the Bechdel test is whenever two women have a conversation that isn't about a man.  April's response is genuine puzzlement over what Vivian is talking about, and in this case, "I'm With Her".

I don't understand why Ness opted to have this bit of dialogue in For Tonight We Might Die.  It feels so forced, so blatant in trying to fit in an agenda where none was needed.  Not that having Charlie casually state to April he was going to ask Matteusz to Prom without wondering whether this might look odd to anyone.

One can applaud the hope to make a same-sex romance nothing out-of-the-ordinary, and I figure that was the goal.  However, it does make things with Charlie complicated in more ways than one. First, it provides a wild inconsistency to him: to be hopelessly puzzled by humans in one moment, extremely shrewd in dealing with aliens in another.  Second, it does make future succession to the Rhodian throne a bit of a question mark, but that's for another time.

There's a lot of confused characters here.  Sometimes they are reasonably intelligent, sometimes shockingly stupid.  Matteusz, for example, has no problem kissing a boy he hardly knows (and just making Charlie same-sex oriented to have a gay leading character without having any buildup to it seems more rushed than anything).  However, when he sees the Shadow Kin stomping towards the dance floor, he asks April, "Did you hire a band?", our young Pole obviously confused by seeing walking shadows.

Walking Shadows...now that's a name for a band.

The idea of inclusion and tolerance that Class wants to promote with Charlie, our lead, being gay (or at least a male romantically attracted to another male) is undercut by Vivian's character, who says some rather ugly things.  When April says she likes Downton Abbey, Vivian remarks of course she would like a show that has "a bunch of white people being nice to each other".  When she's talking to Ram via Skype, Vivian comments on how nice it is talking to someone away from 'white people', or something to that effect.

I was pretty shocked to find that Vivian, our 'intelligent' character, could express rather bigoted comments and be allowed to get away with it.  Ram never said anything like that.  Matteusz, with his immigrant background and non-British accent compared to Vivian's very British accent, never said anything like that either.  I'm perplexed as to why Vivian was allowed to be in essence, such a bigot, or at least someone with a chip on her shoulder.

The tonal confusion in For Tonight We Might Die continues when we see the aftereffects of the Shadow Kin's attack on Vivian.  After all that commotion, Vivian's immigrant mother (the accent gave it away), looks at the scene and zeroes in on the laptop with Ram's frightened face on it.  "You are talking to a BOY?!", she comments in a tone that elicits more laughter than anything else, as if the fact Vivian's room is in shambles is irrelevant to the fact that Vivian has been talking to someone of the opposite sex.

The killing of Ram's girlfriend happens so quickly that it too elicited more giggles than horror, though the blood splattering on his face helped enhance the horror.  As Ram managed to defeat Coriakus, I kept wondering how he managed to a.) stand on one leg and b.) not bleed to death.

Capaldi's appearance is meant to tie Class to the overall Doctor Who universe, but here, it was just a deus ex machina to get these kids out of danger (and to give Ram a mechanical leg).  It also does lead into the question, 'why would The Doctor task teenagers with fighting aliens?'

Well, Capaldi's appearance does also serve another purpose: to allow the cast to say 'Who?' when he appears, because if there's something we haven't heard on Doctor Who is someone saying 'Who?' when referring to The Doctor.

In terms of performances, I think the standout is Kelly as Miss Quill.  She seems to be the only one who is interesting: her acerbic, angry Quill can get away with being sarcastic, unpleasant, even murderous.  Kelly, however, manages to be almost sympathetic in that she was motivated not by greed or revenge but her own sense of justice (the question of who was right or wrong in the Quill/Rhodian war seems one never to be answered).

Austin handled his role as the conveniently confused, conveniently not Charlie well (though I don't buy this 'I'm a Prince' bit, no regal manner to our Charlie).  Elsayed does what he can with Ram, a character who is defined only by a cockiness that seems a bit of a put-up job.

For Tonight We Might Die might have been a good addition to the Doctor Who universe, the so-called Whoniverse, but it's starting off badly.  Rushing through things to get the ball rolling, tonal shifts from horror to almost comedy, and a villain that appears almost a parody of a Doctor Who monster, For Tonight We Might Die shows the British still don't have the whole 'Prom' thing down yet.

At one point, a random girl asks when April is desperately trying to get people out by taking the microphone and yelling at them, "Do they do this in American proms?"  To answer your question, 'no'.  American Proms usually go like this...

Next Episode: The Coach With the Dragon Tattoo
Posted by Rick at 2:50 PM