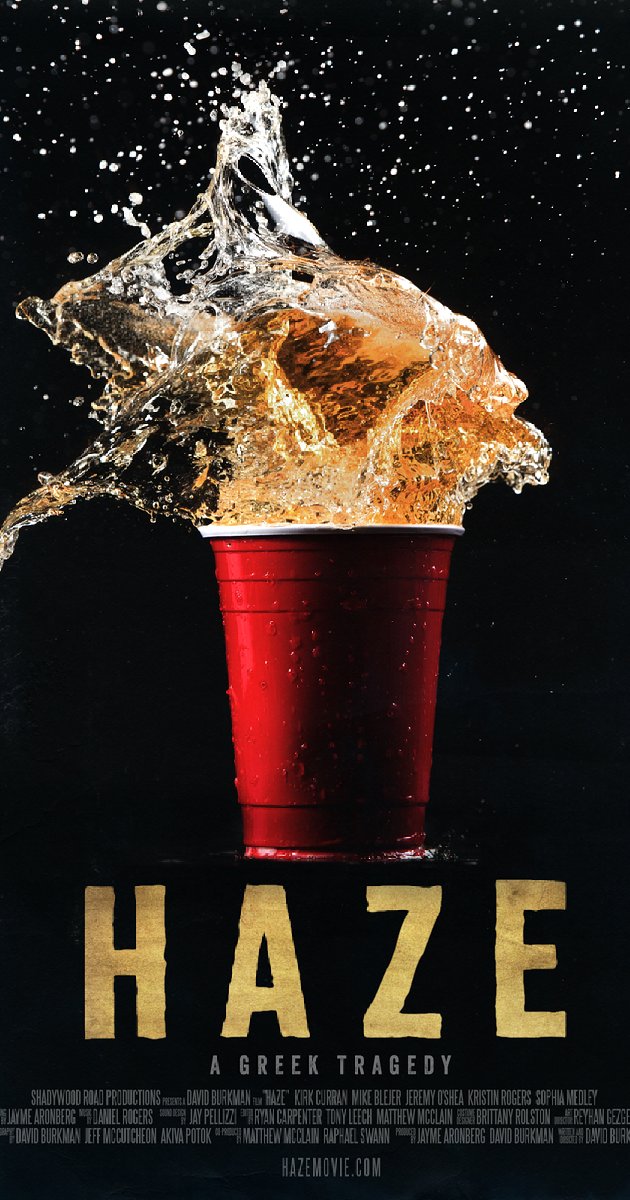 In light of recent deaths resulting from hazing, the actions potential members of a group are made to partake in as part of the group's rituals, a film like Haze seems more timely than ever.  This activity is nothing new, but it seems now that as more young men die as a result of them, greater attention is being given.  Haze is a strong film, albeit at times too eager to be symbolic and artistic when a simpler manner would have done much more.

Nick Forrest (Kirk Curran) is an eager freshman wanting to join the Psi Theta Epsilon fraternity.  Like many fraternities, this one is filled with nothing but booze and broads, in this case from the Delta sorority which they are connected to.  PTE has issues though: a few years back, another pledge, Zac Green, died as a result of excessive alcohol brought on due to the fraternity's pledging ritual.

Leading the charge against PTE and all other hazings is Pete (Mike Blejer), who happens to be Nick's brother.  Pete is making a documentary about fraternities and hazing, which does not sit well with either the PTE members or Nick, who just wants to join this elite group.

The pledges, almost all of them white save for Iranian-American Anoush (Raamin Samiyi), begin their rituals under the eye of Dennis Taylor (Jeremy O'Shea).  Taylor, the pledge minister, is anything but holy: his wolf-like manner is only the tip of the iceberg.  Things at first appear generally light-hearted, dumb but not insidious.  It's when the fraternity gets the pledges in 'Lineup' that thinks take on something of a psychological torture.

And that's before we get to Hell Week, one of the most apropos names.

Meanwhile, at Delta sorority, Nick's childhood friend Mimi (Kristin Rogers) is a pledge, though she is less enthusiastic, appearing more to do it to please Nick.  Not that Nick really thinks much of Mimi, as the freshman has eyes (and loins) only for Sophie (Sophia Medley), the senior who is the female Taylor, with the bonus of being Taylor's lover (girlfriend implies genuine love).

Pete and Nick continue to be estranged, and Nick is letting his passion for PTE cloud his judgment.  A one-night stand with Mimi makes him fail to see that Mimi is in love with him (he telling her, "I had fun last night" has to be among the biggest blow-offs in history).  It also does not prevent him from continuing his lustful desire for Sophie, which does lead to a very brief tryst with her with Taylor's encouragement.

As part of the rituals, the pledges inadvertently help the frat destroy Pete's documentary, down to holding him and his crew hostage.  In between the boozing and whoring where Mimi finds herself humiliated when a drunken sexual encounter is videotaped, the frat boy delighting in it, we get Hell Week.

The most torturous sequence in Haze commences, something out of a horror film.  This brutalization of the pledges concludes with the fraternity telling them they cannot leave the room they are willingly in...until they kill the frat's dog.  Needless to say, we get a horrifying result from that.

Nick by now sees that his young life is in shambles: about to fail out of school, his relationship with Mimi and Pete all but gone, and for what?  Things are made worse for him when he hears Zac's mother speak about her son, and we learn that Pete's animosity comes from his own secret: he was a pledge when Zac died and saw how it happened.  Nick and Pete patch things up, and Nick even manages to get hold of the camera Pete had secretly placed in the holding room PTE uses for Hell Week.  It looks like Nick is going to help bring down Psi Theta Epsilon.

Haze, however, ends on an ambiguous note.  Despite having punched Taylor in the throat at the end of Hell Week, Nick walks into the house to find that all the pledges were admitted...including Nick.

Animal House this is not.

Writer/director David Burkman gives Haze a strong visual experience.  The Hell Week sequence looks like something out of a horror film: the black-and-white cinematography, quick cuts, off-kilter shots and intense acting.  There was a frenzy in a lot of Haze, with what I take to be some nods to other films.

In the last party sequence (of which there are quite a few), Pete has managed to sneak in by wearing a mask and wig (whether his toga was a nod to the humorous take on frats in Animal House is left to the viewer).  He, however, is not immune from the decadence he sees, and finds himself drugged and aroused.  As the frat guys see who it is, they manage to get him outside.  With their masks and costumes, and him surrounded in his garb, it looked like Burkman was drawing inspiration from The Wicker Man's climatic and shocking conclusion.

Frenzy is a good way to describe Haze, and part of it comes from Burkman's decision to film it almost documentary-like, particularly with quick zooms.  That works well when we get Pete's footage, and when we see the psychological torture and abuse the pledges go through (the first Lineup where you see pledges being slapped, spit on, and the Iranian Anoush being forced to say 'I do not know how the bomb got into my luggage' with a faux-accent, is brutal), but when we are not in those moments, it becomes distracting more than jarring.

Haze also didn't answer a key question for me: why was Nick so eager to join?  We get video 'interviews' of the various candidates expressing things about 'brotherhood' and 'lifelong bonds', but for his specific motivation, I never felt I got what it/they were.  I also never quite figured why Pete never told his younger brother what he knew.  Nor for that matter I never understood why there wasn't a greater repercussion when the frat takes on actual criminal activities (holding Pete and his crew hostage), or why Pete never bothered to have backups for his footage.

As a side note, why didn't any of these guys think that whole event wasn't actually criminal?  Did they get to such a degree of group-think and submission that they didn't bother questioning it?

Finally, in the parallel to the ancient Greek story of Dionysus and Pentheus, spoken openly about late in the film by a professor, was a bit too on the nose by this point.  I think it might have worked better if we had used this myth in the beginning of Haze, given its obvious parallels. O'Shea brings a beautiful wickedness in his Taylor, someone whose external beauty hides a hideous, ugly soul.  I hope he plays in a comedy to show range, otherwise he'll be cast as villains for the rest of his career.  Blejer's Pete is also strong though the script makes him a bit opaque at times.  Roger played Mimi as generally meek but it was a good performance. Medley, though, had the smaller role of the semi-villainous Sophie, making it a bit hard to give a full judgment.

On the whole, however, the acting, particularly by Curran and O'Shea, showcase hopefully strong careers.

If Haze has flaws, it is the fact that at times it did get a bit too artistic for its own good (the strobe lighting as Pete comes close to being consumed at the Halloween frat party a bit much for example).  The overt shout-outs to Greek myths in a Greek tale too might have been a bit much.  Of particular concern was the over-use of zooms to give it a 'documentary' look that it could have toned down.

I put that up to the overenthusiastic writer/director spreading his wings.  David Burkman shows himself a capable, even strong director and writer who should try to get out of his own way.  Haze is an excellent calling card on a timely subject.  With strong performances and an almost ripped-from-the-headlines story, Haze is both allegory on what 'brotherhood' really means as well as a cautionary tale of excess.

The ending, open-ended as it is, leaves it up to you which brothers Nick ultimately chose, and Haze now turns to you and asks, 'which would you choose'.