SHADOW OF A DOUBT

Small-town America is usually shown in one of two ways: an idyllic center of warmth or the heart of darkness.  It usually depends on the writers and director's worldview.  Shadow of a Doubt balances those two aspects by making the actual denizens of small-town America good people, but the prodigals returning to it are the sources of darkness.

In nice, quiet Santa Rosa, California, a family is looking forward to the return of Uncle Charlie (Joseph Cotten).  Particularly excited in his niece and namesake, Charlie (Teresa Wright).  She has always been fond of her Uncle Charlie, and Uncle Charlie does seem to have a sweet spot for her.

There are good reasons for this, as the film progresses, and that Charlie discovers.  That 'survey' was really an excuse for two detectives to go inside the Newton house.  One of the detectives, Jack Graham, tells Charlie that Uncle Charlie Oakley may be 'the Merry Widow Killer', a man who marries older widows and then murders them, taking their money with him.  Charlie does not want to believe her beloved Uncle Charlie may be a murderer, but as time goes by, the 'little things' start adding up and Charlie becomes convinced Uncle Charlie is indeed a serial killer.

There is no solid proof of any of this, just 'little things': Uncle Charlie's almost hateful view of these widows that he openly expresses, the 'accidents' Charlie is having.  Even after another suspect is killed in Maine, Charlie is sure that her Uncle Charlie is a murderous, monstrous being.  Graham, with whom Charlie has fallen in love with and who returns the affection, is sadly out of town and cannot be reached.  Uncle Charlie has decided that it is time for him to go, but not before he 'accidentally' holds Charlie on the train as it speeds away.

A desperate battle to survive takes place, and even after justice has been met, the full story still remains hidden, that shadow of a doubt hanging over all things.

Shadow of a Doubt is brilliant in that so much of it really is done by inference.  We never see Uncle Charlie kill any of his widows (though at the end, it looks like he managed to rope one in).  We never hear an outright confession.  We never see Uncle Charlie actively try to do his niece in.  The film asks us to fill in the blanks, read between the lines, and it does it so brilliantly that slowly, bit by bit, we reach the same conclusions Charlie did.

Little hints, little details are dropped in, large enough for the audience to notice but not for the characters save Charlie.  It's a brilliant piece of film writing, and credit goes to three people (minimum): Thornton Wilder, author of the legendary play Our Town,  Sally Benson, authoress of the legendary Meet Me in St. Louis, and Alma Reville, director Alfred Hitchcock's wife who received a rare screen credit.

Hitchcock was wise to have Wilder and Benson co-write Shadow of a Doubt, for they knew intimately what made a 'small town': the people, the atmosphere, the structure.  This allows for the comic relief in the form of Travers and Hume Cronyn as Herb, the 'kooky' friend who always discuss the various ways to commit murder and are big crime fans.  Those bits relieve the tension of the main plot, but in one crucial moment add to it, underscoring Charlie's growing agony over what she know of Uncle Charlie.

The screenplay also plays at something sinister with Charlie and Uncle Charlie, unspoken and at times symbolic.  Charlie comments about how they could be almost twins, and how they are connected by more than name.  This is perversely picked up in a crucial scene between them, when Uncle Charlie tells her that they have the same blood coursing through their veins.

It's one thing to be almost open about showing Charlie and Uncle Charlie as a yin/yang type of relationship, but I found something almost incestuous about Charlie/Uncle Charlie.

There is something dark and ugly underneath all the clean-cut wholesomeness of small-town America and in Shadow of a Doubt, something sinister that is just beyond.

Hitchcock underscores great moments of tension, such as when bells ring as the lights slowly go out one by one in the library where Charlie has her fears confirmed, or when we see the camera move further away at every call Charlie makes to Graham, suggesting he is moving further from her (and from saving her). 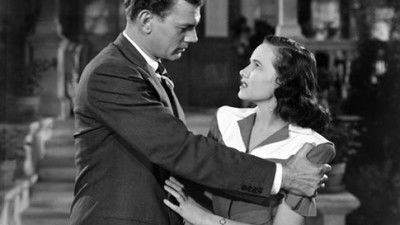 I think Shadow of a Doubt has to be among Joseph Cotten's best performances, and sadly one that did not get the recognition it deserved then and deserves now.   He is equally charming and wicked, a man with no morality to him.  I'll walk that back a bit: he does have a form of morality: the survival of the fittest.  Uncle Charlie as portrayed by Cotten is a man who says, and probably feels, that he is right in killing all these women.  He makes a long statement about how useless these widows are, with all their money and doing nothing with it other than buying things they don't need.

As Cotten does this monologue, it almost plays like a bizarre justification or even confession, one only Charlie understands.  Uncle Charlie is so wicked in his amorality, but Cotten also lends him charm and outward pleasantness, which makes his true nature all the more grotesque.

Wright at times struck me as a little too star-struck with Uncle Charlie, and almost a bit naive.  However, given that is what the character was supposed to be, I cut her some slack.  Charlie grew to be more mature, more terrified, more wary of the man she once was passionate about.  It's the evolution of the character that makes this a strong Wright performance.

There were some things I didn't care for.  Nothing against Carey, but he never struck me as a romantic lead.  Furthermore, with Mrs. Miniver (for which Wright won a Best Supporting Actress Oscar) and The Best Years of Our Lives, I began to wonder if romantic subplots were required in all Teresa Wright films.  We never learned what happened to the widow Uncle Charlie had his eye on (whom we see briefly, waving to him on the same train).

That being said, Shadow of a Doubt becomes both a mystery and a tense cat-and-mouse game, ending in a tense battle to the death.  It's a great Alfred Hitchcock film, one that should be better remembered alongside his other masterworks.