Class Episode Two: The Coach With the Dragon Tattoo Review

CLASS: THE COACH WITH
THE DRAGON TATTOO

Matteusz, the gay Polish immigrant, was not in Episode Two of Class, The Coach With the Dragon Tattoo apart from a blink-and-you'll-miss-it background shot.  This, I think is important into understanding why Class flopped with viewers despite lavish critical praise IF my theory about Matteusz's raison d'être proves correct.   That remains to be seen, but if I'm proven right (that Matteusz is there to be nothing more than the lead character's sexmate), then Class went about things the wrong way.  Still, I'm getting ahead of myself.

The Coach With the Dragon Tattoo, apart from a shockingly unoriginal title, is a slight improvement over For Tonight We Might Die.  It does its best to focus more on drama than on sci-fi or horror, and it teases a series-long mystery.  It's a pity however, that the acting was uneven, that it still struggles with how much gore to put in, and that it copies its precursor Doctor Who's penchant for quick, even silly, resolutions.

Ram Singh (Fady Elsayed) is suffering from Post Traumatic Stress Disorder brought on by the killing of his girlfriend at Prom.  Add to that his mechanical leg, which he is still getting used to.  His artificial leg all but kills his football/soccer skills, irritating Coach Dawson (Ben Peel) and worrying his father Varun (Aaron Neil).  Coach Dawson is not someone anyone can come to: he tells Ram he isn't a counselor and demotes him to second team, later telling him there is no 'third team'.

Coach Dawson, however, has a secret.  It involves his massive dragon tattoo, one that can move around his body at will.

The assistant coach has disappeared, and later a cleaning lady with an accent is devoured alive in front of Ram, the only witness.  For a moment, I had hoped the cleaning lady was related to Matteusz, accents and all, but nope.  Ram believes he is going slowly insane, and worse, he's deliberately cut himself off from Bonnie Prince Charlie (Greg Austin) and April (Sophie Hopkins).  He hasn't cut himself off totally from Vivian (Tanya Adeola), but he 'doesn't want to talk about it'. 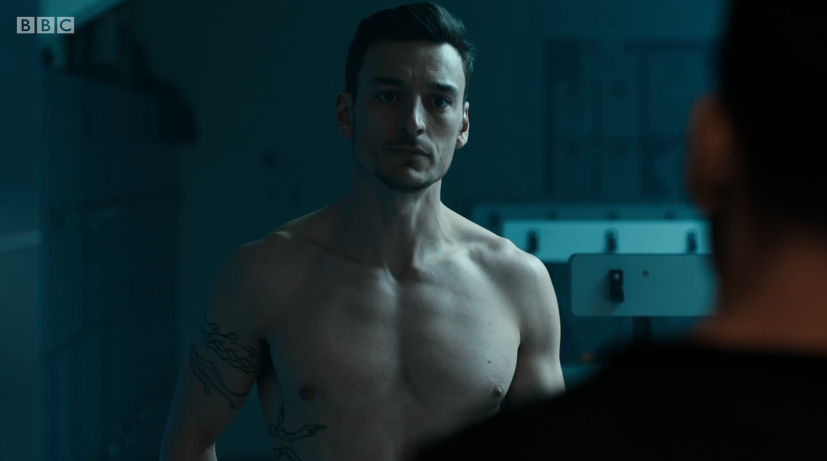 Meanwhile, Miss Quill (Katherine Kelly) has worries of her own.  Mr. Armitage (Nigel Betts) informs her she is going to be monitored by someone from The Governors, which she finds a great irritant.  The Inspector, "Paul Smith" (Jamie Reid-Quarrel) gives her bad marks, but Quill is convinced there is something off about him.

Eventually, Ram tells Vivian what he is going through with his visions of dragons, and they begin investigating.  Vivian urges Ram to get the others to help, but he won't hear of it.  On her own initiative, Vivian gets Charlie and April to investigate, and that leads to poor Mr. Armitage being the next one swallowed up by the dragon.

Miss Quill is not happy about being dragged into these Scooby-Doo type hijinks, but she really doesn't have a choice.  Ram soon starts opening up more with Vivian about his traumas, and she shares her own issues with death by talking about her late father, who died of a stroke.

It isn't until Charlie whips up a drawing of the dragon that Ram puts two and two together, realizing that this is tied to Coach Dawson's massive dragon tattoo.  Confronting him and seeing him walking around with what's left of Mr. Armitage, Dawson admits that the dragon is real.  He was a weak man physically, not respected by students, until the dragon became lodged in him through the tear in time and space that Coal Hill has.  Its mate came after but found it couldn't harm Dawson without harming his mate.  Dawson grew physically strong thanks to the dragon, but both dragons need human blood to live, hence the killings.

In an impassioned speech Ram tells the free dragon to kill him, then to take Coach Dawson through the tear in time and space to keep his mate, which the free dragon does.  While everyone else now has faced their first monster, Miss Quill is still puzzling over "Paul Smith", whom she finds is a robot. 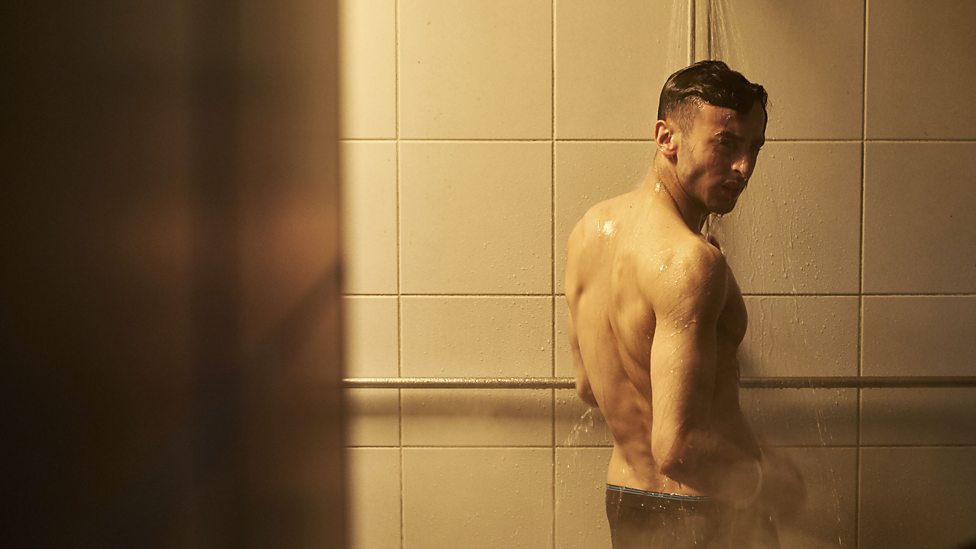 In the good department is that The Coach With the Dragon Tattoo is focused primarily on one character: Ram.  It gives Elsayed a chance to be dramatic and show his range.

In the bad department, Elsayed doesn't have much range.

It isn't that he was awful throughout: at times he showed great promise when attempting to deal with Ram's PTSD.  It's that Elsayed was as unbalanced as his leg.  When showing the struggles he had in handling a lot of violence, he was good.  When confronting the dragon and Coach Dawson, he was stiff and unconvincing.

Elsayed's performance in The Coach With the Dragon Tattoo is something to behold, but not for the right reasons.  It's as if he tried to go for deep agonizing drama, went up so far, then decided the silliness of dragons was just too much to try and make believable.

Much better was Kelly as Miss Quill, who is fast becoming the actual star of Class.  One wonders why she was not the focus of the show.  Her acerbic manner is balanced with a droll sense of comedy.  When she confronts "Paul Smith" about what he wants, he writes in large letters, "You".  Mistaking this for a come-on, she lunges at Smith with wild erotic passion, commenting how she is literally trapped.  After seeing he is a robot when she pushed him towards the dragon to devour, she mentions this to the group.  They do not react, causing her to quip that no one cares that she just kissed a robot.

Kelly makes Miss Quill into a funny figure, but not one of mockery.  She balances Patrick Ness' quips with a sense of anger.  No character could get away with launching a stapler at a man in front of the class after raging at him then switch to an impromptu make-out session with equal ease.  No other character can get away with saying that she first thought "Paul Smith" was "an evil designer of casual coats and gifts" while making it sound natural versus idiotic or deliberately funny. 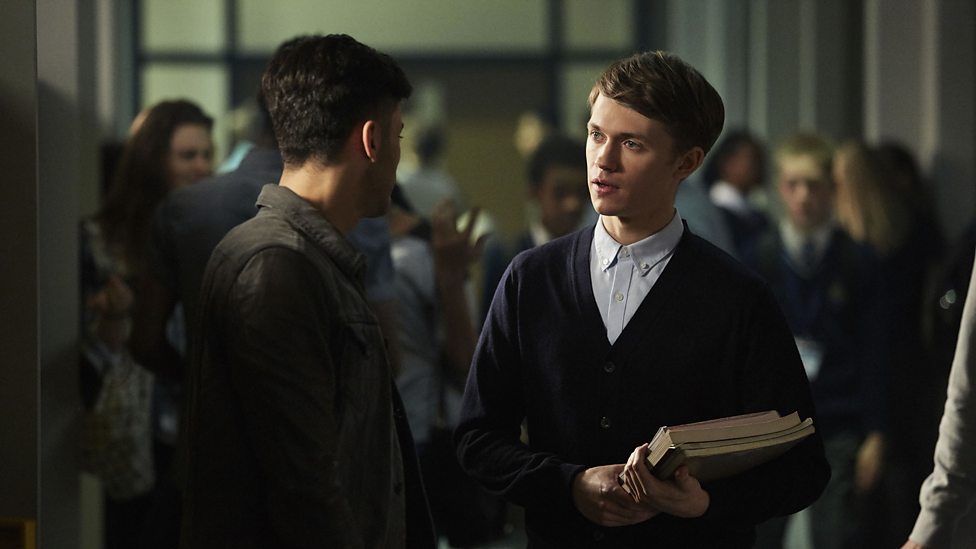 Curiously, despite being only a year older than Elsayed, Greg Austin looked considerably older and far too old to be a high school student (even if he was only 24 at the time).  Perhaps it is because Class seems stubbornly set on making Charlie this naive figure unaware of human interactions, except of course when it comes to gay sex, which Charlie seems extremely adept at for an extra-terrestrial.  When trying to talk to Ram, Ram replies 'Say it just once more,' and our 'innocent' does exactly that, then is puzzled as to why Ram knocks his books down.

Charlie later asks April "What's folk dancing?" when she tells him and Vivian that she plays the violin at those events.  Quickly pulling up a video as Vivian and April discuss Ram's claims that there be dragons, he doesn't quite interrupt them but does ask "Why are they all in a circle?"

Class is already getting itself into strange situations, and I don't mean supernatural ones.  Charlie is meant to be unaware of basic human knowledge or behavior, but when it comes to sex, he's a master of human agility. This inconsistency, if not addressed, is going to make Charlie into a very curious character.

Hopkins is kind of just there, and while Adeola is better as Vivian, her character is coming across as rather unlikable. As Ram commiserates on the cleaning lady, saying she was "just sneaking a fag" when she was killed (and no, that wasn't a Charlie/Matteusz joke), Vivian starts lecturing him about how as an athlete he shouldn't smoke.  Whether this was Ness' efforts for comedy or not, it didn't sound or look realistic.

I wonder about the gore-factor in The Coach With the Dragon Tattoo.  It is not excessively graphic a la Gotham, but it is at times a bit too much.  Granted, as an adult I might not have the tolerance for graphic violence that teens do, but I do wonder whether they can be more restrained.

As a side note, Austin, Hopkins and Adeola were hilarious when facing off with the dragon in Mr. Armitage's office.

Finally, the resolution was terrible.  Essentially, just talking to the dragon, which does speak English, was enough.  It was bad enough that Ram couldn't connect Coach Dawson to the killings even after seeing him near the sights of the disappearances, but this Doctor Who-type resolution was just lazy.

The Coach With the Dragon Tattoo had its moments: the efforts to address the PTSD Ram was suffering, Miss Quill's quips, setting up for a larger story.  However, it wasn't the breakout Class needed to be to push it into a strong spin-off worthy of its own merits away from Doctor Who.

One more thing regarding The Coach With the Dragon Tattoo.  Kevin Williams, the boy Miss Quill essentially killed and who is marked 'missing', was not mentioned in this episode.  Let's see if his case is ever brought up again, because you know...Mr. and Mrs. Williams might wonder about their little boy.

Next Episode: Nightvisiting
Posted by Rick at 10:26 AM