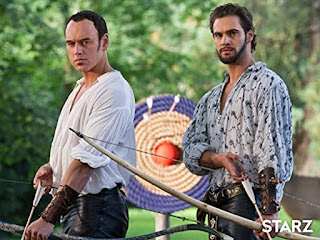 As we race towards the end of Da Vinci's Demons Season One finale, we are getting more sex, more violence and more craziness.

Leonardo da Vinci (Tom Riley) wants to get to the secret in the Vatican's Secret Archives. He knows buried deep within the bowels of the Holy See, he will find the information to locate the Book of Leaves. However, he can't just walk into the Vatican. He can, however, snorkel his way in by essentially inventing a diving bell. Once inside, he literally bursts out of His Holiness' bath. A shocked Pope Sixtus IV (James Faulkner) is forced into the Archives, but Sixtus is a wily figure. He tempts Leo with knowledge, particularly about his mother. Managing an escape (thanks in part through the Spear of Destiny), Leo finds that his friends Zoroaster (Greg Chillin) and Nico (Eros Vlahos) have captured their bitter enemy Riario (Blake Ritson). With both keys now in his hands, Leonardo is close to finding the Book of Leaves.

Meanwhile, Guiliano de Medici (Tom Bateman) is balancing his affair with bar wench Vanessa (Hera Hilmar) and investigating who Rome's spy is. He also has to endure the machinations of his brother Lorenzo (Elliot Cowan), who has pimped Guiliano out to the Pazzis in a marriage of convenience. His investigation has discovered Lucrezia (Laura Haddock) is not just Lorenzo's mistress but said spy. This is also discovered by Leonardo, but unlike him Guiliano does not know the motive behind her actions. Nevertheless, it is a battle for survival when Lucrezia and Guiliano finally see each other, where one may not survive. 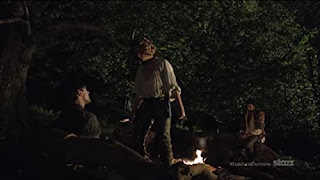 The Hierophant is a very esoteric title, deriving from tarot cards. It fits into the episode on so many levels. First, the card is of a sitting Pope, which connects to Sixtus IV's various schemes and wickedness. It also connects with arranged marriages, which Giuliano is facing. It is a sign of the intelligence within this ahistorical episode and series that this balance works.

As a side note, it is only now with such a title as The Hierophant that I realize that Da Vinci's Demons derives almost all if not all its Season One titles from tarot. As each episode title has connected to that episode's plot, it did not occur to me to make that tarot connection until The Hierophant given that for those unaware of tarot, it would be a very obscure title.

The Hierophant is to my mind the best episode of the series. It is breathtakingly beautiful in terms of visuals, particularly when Leonardo is underwater or when we see various dreams and fantasies. It gives viewers perhaps obvious but still shocking moments, such as when Leonardo crashes His Holiness' bath. We even get to see Ritson's firm abs, showing even the villains can be hot.

The Hierophant also has some of the best performances yet from the series. Of particular note is Bateman as Giuliano, who gets to be romantic, intelligent, courageous and tragic all in the course of an hour or less. Heldar too has excellent moments, helped with strong dialogue. When Giuliano tells her she is foolish to describe her digs as better than his palace, she replies, "Your palace is a prison with better linen". Holding her own yet in clearly in love with Giuliano the man, Heldar holds our attention.

The Hierophant balances three plotlines: the Pazzi's conspiracies, da Vinci's investigations and Giuliano's discoveries. Each work well without intruding on the other. With spectacular visuals, strong performances and even a hint of tragedy (this episode ends with mournful music versus the traditional theme), The Hierophant is a fast-paced, thrilling adventure. It is what Da Vinci's Demons set out to be.

Next Episode: The Lovers