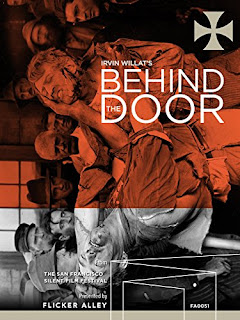 In the early days of film, the First World War was a dominating subject. Two of the first three Best Picture winners revolved around the war (Wings and All Quiet on the Western Front) and there were other films that dealt with the war. Behind the Door was slightly behind the times in that it premiered after the war's end, but it touches on subjects that still resonate today.

Broken World War I veteran Oscar Krug (Hobart Bosworth) returns to his Maine hometown, into a world far different from what he knew. Going back to 1917, we see that despite being a second-to-third generation American, Krug is suspect because of his German ancestry and his mother's German birth. He however is able to stand up against everyone in town, and his former enemy Bill McTavish (James Gordon) now joining him to enlist.

They now serve on the USS Perth, but there's a stowaway: Alice Morse (Jane Novak), whom Krug secretly married. She is hidden by the nurse's group with the hopes of disembarking at the next port, but a German U-boat has taken the ship down. Alice and Oscar have survived, but evil German captain Brandt (Wallace Beery) has taken Alice prisoner, leaving Oscar to float off. However, Oscar manages to survive. Now with a new command, Krug reencounters Brandt, who does not remember Krug. Brandt delights in recounting Alice's cruel fate, unleashing Krug's fury. Now Krug has a chance to enact his own revenge, harkening back to his time as a taxidermist. 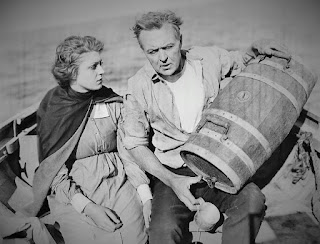 It is a sad note that the condition of many silent films makes them hard to watch. Behind the Door is no exception, for the version we have now is patched together from three separate sources. Even then, sometimes we see the damage dominate the center of the film. As such, it makes it hard to see.

However, once we accept the damage will be there, we see that Behind the Door is a very strong film. Some of the visual moments showcase beautiful moments, particularly with the title cards. When a mob comes to attack Krug, we read "Somebody get a rope and start the tar to boil" accompanied by an image of a burning noose. When we see title cards as Oscar and Alice are adrift, we see the text almost float in the water.

We even get a little bit of fourth wall breaking when Beery gives us a quick glimpse when we first see him. I almost expected him to try and twirl his mustache. I put that down to a theatrical background where audiences could boo the villains.

Behind the Door is simultaneously progressive and regressive in its portrayals. It does well in showing German-Americans as loyal, patriotic people (would that films made in World War II done the same for Japanese-Americans, though to be fair a few films did). However, we get the EVIL Germans, where we see them be sexually rapacious, violating innocent American womanhood.

Behind the Door did well is that it managed to show just enough without being overtly graphic. The audience sees Alice slipping into the darkness while the German sailors swallow her up, and we can imagine the horror of Krug's cruel vengeance. We do not need the film to be overt to be filled with horror. 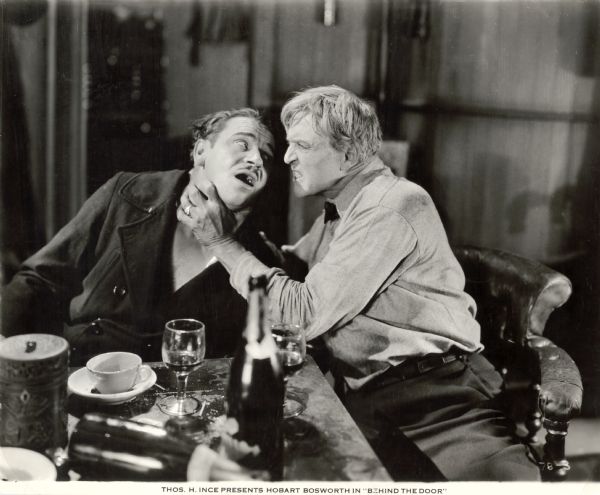 The film does have some issues when it comes to the acting. It does have some of that almost cartoonish silent film acting style that looks over-the-top nowadays. Of particular note is Bosworth, who at times lets his shaking fists do his acting for him. Novak was very pretty and her acting did not slip into theatrics. There were some moments that came close but not full-on grand.

Gordon's McTavish did strong work, shifting from antagonist to friend. Beery also did well as the brutal Brandt to where he was almost sympathetic in the end. His last moments, the look of horror in his face, were well-acted.

The film is also quite beautiful in certain moments.

Behind the Door, not remembered now, might be worth a remake. Sad to say that the themes of brutality and revenge in war are still relevant. While the film is itself sad, we do get a nice moment to close this tale, a curiously optimistic moment in this tale of woe.