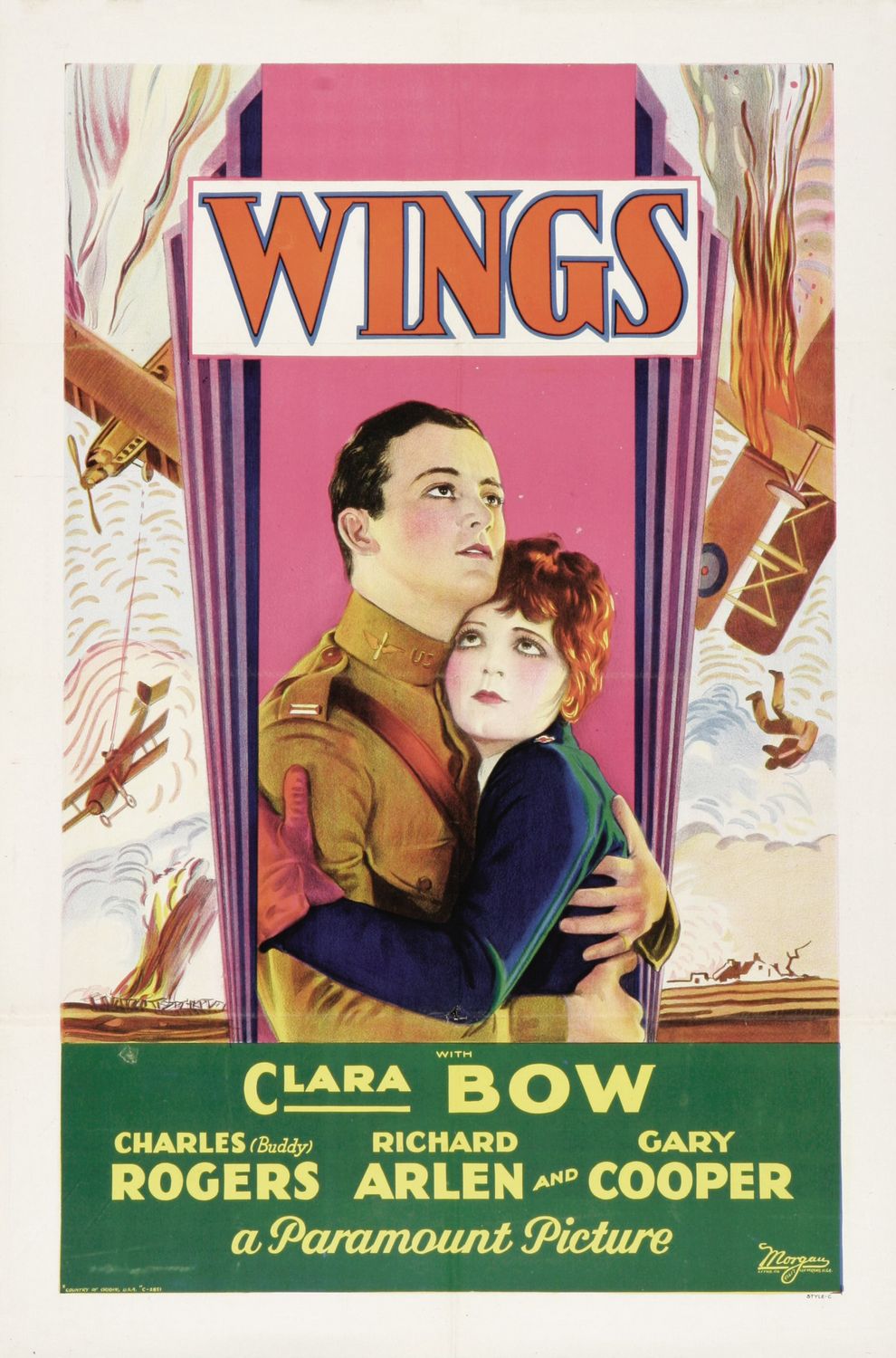 Soon, the clouds of war come: World War I to be exact.  With that, both David and Jack join the Army Air Service (there was no official Air Force until after World War II) and during their training, their rivalry shifts to a genuine friendship.  Sent off to France, they excel at bringing down German planes, and unknown to them, Mary herself has joined the war effort.  She is also in France, now an ambulance driver.

Jack is the more legendary of the two, earning the name "The Shooting Star".  Mary recognizes the name since she had painted on Jack's car a shooting star and he'd named his car "The Shooting Car".  By coincidence, she, Jack and David are in Paris: Mary driving her ambulance, the boys on leave.  They are living it up: drinking and whoring, unaware that their leave has been cancelled and must report back immediately or face court-martial.  Mary finds Jack at the Folies Bergere, drunk out of his mind and about to leave with a femme fatale.  She quickly gets into a slinky dress and brings him back to the hotel.  By misfortune, Military Police discover Mary in a state of undress, assume the worse, and send her home.

Now, it's off to the Big Battle.  Jack confesses that the good-luck charm he's kept with him is the locket Sylvia gave him.  Aware that Sylvia is in love with him and not Jack, David says nothing.  Jack accidentally breaks it and David discovers the inscription Sylvia wrote is for him, not Jack.  Jack refuses to let David put the picture back in, and rather than let him discover the truth, David tears the picture up.  Jack is furious, but before they come to blows both are called to fight a massive German airplane.  In their haste, David leaves his good-luck charm, a small bear he's had since childhood.

David is shot down behind enemy lines, and while Jack is successful in the mission, he now regrets the loss of his friend.  David manages to steal a German plane, but you can imagine who shoots down the enemy plane headed toward the Allied line.  Jack, discovering the truth, tearfully begs forgiveness to his true friend.

Now back home, Jack is hailed as a hero, but David's parents or Sylvia cannot celebrate.  Jack goes to David's home and begs forgiveness.  David's mother comforts him, assuring him that she knows it was the war, not Jack, that killed her son.  Jack, at home, looks at The Shooting Star car and sees Mary.  At last, with peace at home and his heart, he discovers what's been there all that time.

Wings is a remarkably beautifully shot film.  William Wellman created some scenes that are still remarkable to see nearly a hundred years after its premiere.  The aerial battle scenes and the bombing of a French town are thrilling, even more so when one considers just how limited the technology would have been in 1927.

However, the camera work is also employed for some gentle sequences.  Early in the film, we have a courting scene between David and Sylvia that takes place on a swing.  The camera is moving with them, and it makes the scene more intimate, more romantic.  There is also a famous sequence at the Folies Bergere, where the camera moves past a series of tables to end with the drunken debauchery of David and Jack.  It moves  past a whole series of quick stories, with one of them quite daringly suggests lesbianism.  Harry Perry's cinematography both in the battle sequences and the intimate scenes is extremely beautiful (I'm aware I've used beautiful twice, but it bears repeating).

Within the film itself, there are some sublime performances.  Clara Bow proves what a beautiful (there's that word again) and talented actress she was.  Her expressions of sadness whenever Jack at best treats her like a pal and at worse ignores her completely is genuinely heartbreaking.  It's not all sadness for the IT Girl, though.

The scenes when she's driving the ambulance show a plucky side to Mary, and even allow her to play a bit of comedy.  Most of the comic relief in Wings comes from El Brendel's Herman Schwimpf, whose German name causes endless troubles, all which are ended as soon as he shows his Stars and Stripes Forever tattoo.

Side note: Wings was intelligent in showing the xenophobia attached at the war's start against anyone with a German or German-sounding name.  It shows that the film was going beyond jingoistic chest-pounding and documenting a realistic view of events a decade old.  This also goes to how those left behind reconciled their private pain with the knowledge that other people's sons came back.  Even after getting sent out of the Air Service and becoming a mechanic, there are still lighthearted hijinks with Schwimpf.

Both Rogers and Arlen showed how they went from fierce rivals to dear friends.  Their final scenes together are especially touching (thought a flaw in the script by Hope Loring and Louis D. Lighton based on a story by John Monk Saunders makes the transformation between them a bit too fast).  The biggest surprise will come from the smallest role.  Gary Cooper is on screen for less than five minutes of the nearly two-and-a-half hour running time, but in his brief appearance as Cadet White he is magnetic.  He has a screen presence that is completely unmistakable, and it is no wonder that his small appearance in Wings was so memorable that it made him a star.

I did find a few faults with Wings.  The Folies Bergere scene (especially a running bit about Jack being so drunk he saw bubbles everywhere) ran a bit long and comes off as unintentionally humorous.

On a personal level, one never understood why Sylvia and David kept protecting Jack's fantasy about Sylvia being in love with him.  One also stretches things to think that a bathroom attendant at the Folies Bergere could communicate with Mary and get her to be a seductress albeit for the best of reasons, so quickly.  However, this is one of the benefits of silent film: language truly isn't a barrier.  What's to say Mary can't speak French or the attendant can't speak English?  That, I confess is being a bit picky, but I digress.

Still, Wings today is a film that holds up remarkably well.  There are beautiful (I give up: it's a beautiful film) scenes of tenderness within it to balance against both the lighter moments and the exciting battle sequences especially those that take place in the air.  There is a real sense of tragedy when Mary sees Jack's locket.  She remembers when she gave him her photo before he left for training, and we know what she doesn't: Jack has Sylvia's picture in it, and worse, that the locket was meant for David.  We wait in sadness for her to open the locket, and when she discovers its contents, it's liable to break your heart.

The film itself is quite good, with strong action scenes and simply beautiful moments strong acting, especially by the IT Girl.  I hope that people will not only appreciate good silent films but see in Wings a fine example of a good film in general.

Please visit the Best Picture retrospective for reviews of other winners.
Posted by Rick at 7:44 AM