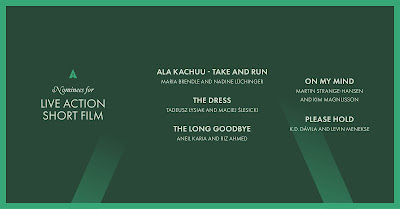 This year, the Academy of Motion Picture Arts & Sciences, as of this writing, will not present the winner/winners of seven categories on their live broadcast. I understand it is so they can give more airtime to Billie Eilish and the comedy of Amy Schumer & Wanda Sykes.

Be that as it may, I have decided to take advantage and see the five short films nominated for Best Live-Action Short Film. I will review them in the order screened, followed by my final analysis. They run from a mere 12 minutes to a reasonable 38 minutes. Three are in foreign languages (Danish, Polish and Kyrgyz) while the other nominees in English are from the United Kingdom and United States. 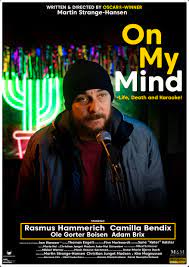 Henrik (Rasmus Hammerich) walks into an empty bar, clearly distressed. Barmaid Louise (Camilla Bendix) is more welcoming, albeit disinterested to Henrik versus her crabby boss Preben (Ole Boisen) busy with his taxes. Henrik's had his whisky and is about to leave until he spots a karaoke machine. Henrik pays, begs and pleads to use the machine and record himself singing Always on My Mind. An irate Preben finally demands to know why Henrik is making such an issue over this. While we know Henrik is singing Always on My Mind for his wife Trine, it isn't until he tells them that she is being "turned off" that we know why he's so insistent. It is so that Trine, or her soul, can hear this song before he agrees to turn off the life support system. Even if she cannot literally hear the song, her soul can.

On My Mind says in eighteen minutes more than most films say about loss, grief, love and that sad mix of the three. The three primary performances of Hammerich, Bendix and Boisen are excellent. They have basically one trait (forlorn, respectably disinterested and short-tempered), but when Louise and Preben realize Henrik's dilemma, their shock registers so much. Hammerich's agony is heartbreaking to watch. His face and specifically his eyes reveal Henrik's grief but also his quiet belief that her soul will fly. On My Mind is not a film about faith, but a film about hope. Intentional or not, at the end when Henrik opens the window after Trine dies, we see the light from the sun reflect on him.

I admit to getting emotional at On My Mind. I was deeply moved by the story and the performances. Beautiful, heartbreaking but curiously hopeful, I found On My Mind perfect as a film, short or otherwise. 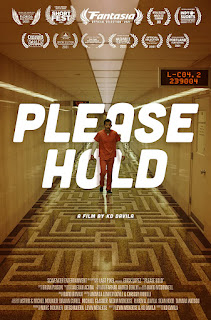 Mateo Torres (Erick Lopez) is going about his business when a police drone informs him that he's being arrested. He is never told exactly what his crime is, but Correcticorp, the automated justice system corporation, will not let him go. Mateo goes through indignity after indignity in this automated jail hell. He does not have enough cash to so much as turn the lights off in his cell, let alone hire a remotely (and remote) lawyer. Phone calls to his disbelieving parents eventually get him the $10,000 he needs to hire attorney Guillermo Lima, but in all those months locked up he already has agreed to work for Handmade, making literal cents knitting and crocheting. Mateo, on the brink of insanity, barely holds on long enough to not accept a guilty plea to a lesser charge to get Lima. Lima takes one look at him and appears, almost irritatedly so, to see Mateo may be a case of mistaken identity. Released, Mateo picks up his personal property to find his life in shambles and Handmaid still offering him employment.

Please Hold is a brilliant, dark and cynical tale of the worst of two worlds. On one hand there is the various automated operating systems we all endure whenever we are desperate to get a living person on the line. On the other, a criminal justice system that has nothing to do with justice. Please Hold clearly takes inspiration from both Kafka (The Trial immediately coming to mind) and the dysfunctional criminal justice system. The film, in a clever way, blends the frustrations of enduring machines repeated telling us "I did not get that" with the sad option for detainees to accept plea deals that will give them reduced sentences for crimes they did not commit rather than endure lengthy jail stays, expensive trials and perhaps longer sentences. "We hope you enjoyed your stay. Please exit the room to begin the discharge process", the faceless machine cheerfully recites to an emotionally spent Mateo. Lopez is brilliant as Mateo, this poor average Joe who finds himself in this insane world and struggles against two horrors: the indifference of machines and the indifference of justice.

In turns frightening and funny, Please Hold is one of the sharpest satires I have seen, though it is also frightening. Amazingly clever down to the smallest detail (such as how corporations can exploit prisoners perhaps even after their nightmare ends), Please Hold works on both the literal and symbolic level. 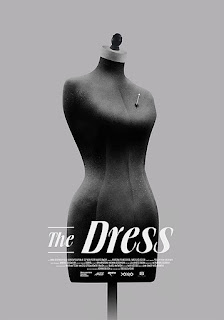 Lonely chambermaid Julia (Anna Dzieduszycka) lives her life of quiet desperation, smoking and performing auto-erotic exercises. Julia's loneliness is compounded by the fact that she is below average height. Bitter cynicism masks emptiness, until truck driver Bogdan (Szymon Piotr Warszawski) catches her eye. To her surprise, Bogdan appears interested too. Promising to return from a run to Kyiv, Julia prepares herself for romance, love and hopefully her first sexual experience. Her best friend/coworker Renata (Dorota Pomykala) helps her by presenting her a dress from Renata's daughter. However, the Bogdan/Julia tryst does not end as she had hoped. At the end, Julia can only observe a beautiful nude average-height woman in bed, a sad echo of Julia's own lost dreams.

I found The Dress well-acted, particularly Dizeduszycka as Julia. Her monologue to Renata, in tears, telling her how she just wants to be someone, anyone else, is deeply moving. There is also a wonderful, melancholy scene where she disrobes and gets into an empty bed, clearly imagining a romantic moment with Bogdan. Masking her loneliness with cigarettes and sarcasm, we see the longing in Julia. In many ways, The Dress is not about those with dwarfism, but about all those lonely people to quote a song. For me, however, the melancholy and unhappy ending push the film down. A film does not have to be happy to be good, and The Dress is good. However, it was not quite my cup of tea. 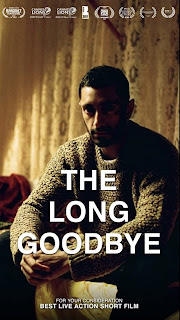 THE LONG GOODBYE (12 Minutes, in English)

An average British family of Pakistani descent is going about their lives, preparing for a wedding, when a group of crazed white racists storm through the family's neighborhood. Forcing their way into the family's home, the racists men grab everyone in sight, separate the men from the women and children, and force the men down on their knees. One of the men (Riz Ahmed), attempts to flee but is shot in the back. He was lucky: the other men were shot in the head, with the British police helping the white thugs. Ahmed manages to get up and give us a spoken word/rap monologue, occasionally looking straight into the camera, about the racism all around him.

What the hell is this garbage? The Long Goodbye is not a movie. It's a mix of music video and diatribe, born of anger on how rampant racism is all around the world of Ahmed. It is no surprise that The Long Goodbye plays like a music video: Riz Ahmed is clearly rapping during the chaotic violence going on. We got only the tiniest glimpse of both the family and the rioters. This is not to say I want "the rioters side of the story", but what is the context of the extremism of their actions apart from Ahmed's worldview of how racism is all around him? Playing more like a promotional film for Ahmed's The Long Goodbye album than a real film, Ahmed does what for me is a bane of my film viewing: look straight into the camera to address us. I'm not one for lectures, and The Long Goodbye is just that. It is a film that thinks is insightful but which I found insipid. Pointless, smug, perhaps Ahmed might do well to make a film about a truly vile act of violence and racism: Partition. 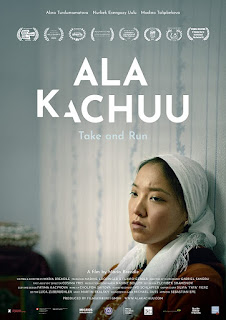 Sezim (Alina Turdumamatova) has a chance to advance her life by scoring well on a university entrance exam, much to her very traditional mother's dismay. Sezim goes to the Kyrgyzstan capital Bishkek anyway, staying with her friend Aksana (Madina Talipbekova), who is shunned in their hometown as a "tramp". Sezim starts her new life: learning to drive, getting a job and waiting for her scores. One day, three customers come into the bakery asking for her colleague, frightening Sezim. To her horror, Sezim is abducted by these men and forced into marriage to one of them, Dayrbrek (Nurbek Essengazy Uulu). Sezim endures virtual slavery and rape, is horrified that her parents agree to this marriage, and finds the loss of her pet goat pushing her to deep depression. Fortunately, one day Dayrbrek's grandmother gives her some clothing to wash, one of them which contains car keys. She makes a break for it, stopping to quickly see her younger sister, and eventually runs out of gas. Sezim, despite no money, manages with some family heirlooms to pay for a bus back to Bishkek and hopefully safety.

Ala Kachuu is the given title, which refers to this little-known but still horrifying act of bridal abductions. The fact that anyone thinks any of this is rational is horrifying. What is surprising about Take and Run is that despite the monstrous situation they are not truly villainous. Sezim's mother-in-law is a nasty piece of work, but she is the general exception. Dayrbrek himself is not evil himself, and his grandmother has moments of kindness. However, we can't be blinded to how monstrous this system is and worse, how it is accepted. "We all came in tears, but our tears dried," the grandmother says, revealing that to them, this is how things are. This is a well-acted film, particularly Turdumamatova as Sezim, her optimism and horror revelatory. Take and Run ends with a note telling us thousands of women are abducted every year, a sobering thought.

With one exception this year's Best Live-Action Short Film nominees manage to tell their stories with intelligence and entertainment. They tackle serious subjects, sometimes in a straightforward manner (Take and Run) and sometimes in dark humor (Please Hold). I was impressed with two of them, thought one of them was strong, one good but not to my tastes and one I found so much woke garbage.

I think the big battle will be between the moving, somber On My Mind and the cynical and brilliant Please Hold. I would vote for On My Mind, though I expect that as one of the two English-language films Please Hold will win. I would not be unhappy if either won and should Take and Run pull off an upset I would likewise be pleased. The Long Goodbye is a waste of time: more a promotional video than a real film. If perhaps Ahmed had built a story around these characters, we might have had a film. Instead, we had nothing. I found the nominated films on the whole fine work. It's a terrible shame that they will not be recognized during the broadcast.

Trust me: a few of them are much better than some of the feature films in major categories (looking at you, Spencer).