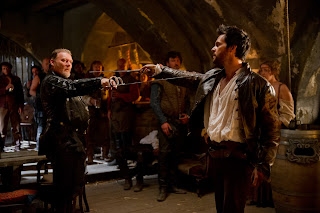 DA VINCI'S DEMONS:
THE MAGICIAN
Just when you are sitting on top of the world, you are arrested for sodomy. Such is life, I suppose, and such is the case with The Magician. This Da Vinci's Demons episode builds on its mix of history and supernatural, entertaining while maintaining a strong amount of decadence.
Leonardo da Vinci (Tom Riley) continues to struggle with being the weapons maker for the Medici family. He sees that his weapons, while inventive and useful, will only increase war and death. That, fortunately, is what Rome wants. Pope Sixtus IV (James Faulkner) has allied himself with the Pazzi family, rivals to the Medici, in a secret bargain where the Vatican will use the Pazzi as bankers in exchange for bringing Florence under Rome's heel.
Lorenzo de Medici (Elliot Cowan), convinced that he has uncovered the traitor at Court, still hesitates in killing his old mentor Becchi (Michael Elwyn). Lorenzo's brother Guiliano (Tom Bateman) and even Lorenzo's mistress Lucrezia (Laura Haddock) also doubt Becchi's guilt. Lucrezia knows Becchi's innocent because she is Rome's spy, but she cannot unmask herself. She is a pawn in the hands of His Holiness' nephew Riario (Blake Ritson), who presents terms of surrender to Lorenzo.
Lorenzo appears to have no alternative, especially when Leo destroys the armory. However, Leo has a few tricks up his own sleeve, saving Florence and with the bonus of humiliating Riario. At a feast to fete the artista, things appear to go Leo's way. He even starts cracking the mystery of the Book of Leaves thanks to clues hidden in plain sight: the painting of Lorenzo's grandfather Cosimo. However, the Officers of the Night, by means of a secret denunciation, arrest the arrogant artist for sodomy, a crime that while tolerated in Florence is still technically illegal. 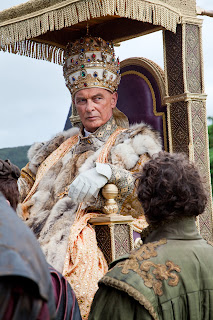 The Magician gives its lead a chance to show a different, more thoughtful side to our genius. Riley still brings out da Vinci's arrogance and brash self-confidence. However, it allows him to think on the high cost of war. This episode makes Leonardo more contemplative, more aware that if he comes up with a better weapon, inevitably his rivals will find an answer to it. Seeing the cycle of war and ingenuity, Riley brings out a more conflicted man.
That isn't to say he still isn't cocky to the point in insanity. When interrupting Lorenzo's surrender, Leonardo delights in mocking Riario, the joy he has in making his rival look foolish almost uncontrollable. The addition of rain falling on them gives the scene a greater sense of delight.
The Magician also gets points for this bit of dialogue. As Lorenzo celebrates the glories of Florence and Florentine culture, he says that the city "will be remembered for centuries to come as a cynosure of innovation and artistry". Any time the word "cynosure" can be used at all, let alone as something as gleefully and nakedly bonkers as Da Vinci's Demons, should be commended.
For the record, "cynosure" means "a person or thing that is the center of attention or admiration", and yes, I did have to look it up.
There's much witty dialogue in The Magician. The Unholy Father if memory serves right quips at one point, "Resurrection requires death", meaning Florence must die for him to move on his own various agendas. We hear that "The Confraternity of Death are such vultures", again showing more elegance in turning phrases than most television shows. 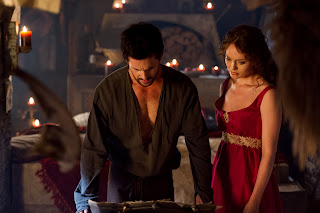 While these bits of dialogue are clever, The Magician still has at least one hang-up of Da Vinci's Demons as a whole: making the dialogue serve less as people speaking and more as infodumps to the goings-on. This is especially evident when Becchi is killed off: his final conversation with his assassin is more about giving audiences information about what has and will happen versus the words of a dying man.
To its credit, we do get strong performances from the cast. Of particular note is Bateman, who asks for Lucrezia's help in turning Lorenzo's heart back to Becchi. It shows a quietly desperate man, who knows he is not strong enough politically to go against his brother but who is still loyal to their old advisor. That isn't to say there aren't a few bumps: the scene between Lorenzo and Guiliano is a bit more theatrical than I would think well of, but it isn't terrible.
On the whole, The Magician moves the plot forward and gives us both the now-expected sight of Leonardo's genius but a more vulnerable Leo. That and "cynosure" push The Magician higher in success.
Next Episode: The Tower
8/10
Posted by Rick at 1:26 AM