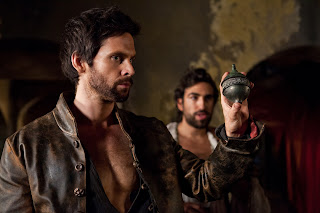 As we continue to delve into the myriad of mysteries Da Vinci's Demons starts serving up, I think that The Serpent is a slight though positive improvement over its pilot episode. While still hampered a bit by its penchant for exposition dialogue, The Serpent offers up more intrigue amidst the supernatural goings-on.

Leonardo da Vinci (Tom Riley) is still attempting to use his massive war machine without it killing everyone. He also wants to find the connection between himself and The Jew (Ken Bones), whose execution set off a mad search for the fabled Book of Leaves. In his unauthorized autopsy of The Jew, Leonardo finds a key that may lead him to this mysterious tome.

The nefarious Vatican group that also wants the Book of Leaves is equally at work to find the key. The Pope's nephew Riario (Blake Ritson) has a spy within the ranks: Lucrezia (Laura Haddock), mistress to Florence's uncrowned rule Lorenzo di Medici (Elliot Cowan). Riario will use any means necessary to get the key. If it involves torturing Leonardo's apprentice Nico (Eros Vlahos) or unwittingly sending his own men to die when attempting to open Leo's boobytrapped chest so be it.

However, what about recruiting Leonardo to join Rome? Will da Vinci betray the Medicis and his beloved Florence to get at the Book of Leaves? Will he instead perhaps give his attempted collaborators a literal twenty-plus gun salute instead? 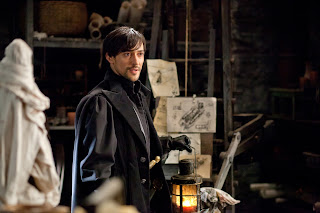 The Serpent has some wonderful moments, particularly at Lorenzo's lavish celebration for Riario's welcome.  The lavishness of the celebration coupled with the nowhere near subtle comparing of Riario with the Serpent from the Garden of Eden works so well here. It manages a surprising balance between serious and camp.

There was also a great moment when da Vinci put things together by using a blind witness. It was quite a clever and logical scene that worked well.

The Serpent also allows for some strong acting from the cast. Riley dove into his climatic speech defending his beloved Florence with almost crazed abandon, tearing at the dialogue as da Vinci tore into the Pope's soldiers. He has a manic manner that makes Leonardo more an action figure than a mere artistic intellectual.

However, he does also show a bit of a rakish charm, particularly when working with Haddock. There is a nice interplay between them that shows them as lovers and secret rivals. 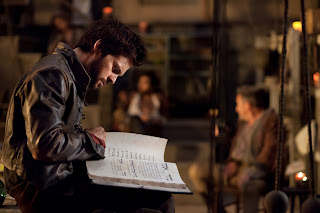 You can tell Riario is a villain due to his all-black ensemble. Ritson's portrayal is quite quiet and methodical, as someone who not only knows he is evil but enjoys it. No self-doubt or introspection for this beneficiary of nepotism. He too knows the part requires a bit of camp, but he keeps it at a minimum.

In their smaller roles, Vlahos, Cowan and Gregg Chillin as Leonardo's friend Zoroaster also do well.

The Serpent's flaws however are as the same from The Hanged Man pilot. Series creator David S. Goyer and cowriter Scott Gimple still have too much dialogue serve as basically exposition dumps. There was also a particularly odd moment when Leonardo attempts to fool the Pope's guard by claiming a snuff box was really an explosive. Granted, they had just seen their fellow guardsmen killed by an exploding chest. However, as played and shown, the sequence made it look like Leonardo was holding a Holy Hand Grenade from Monty Python and the Holy Grail.

That Zoroaster knocked it down to reveal it was indeed a snuff box did not help.

Also, I was puzzled by one bit of dialogue. As part of the investigation into the Jew's capture, Leonardo surmises that the best place to hide a book is in a bookshop. "Why would a Jew be in a bookshop?", one of them asks. I was not sure if it was a joke or serious.

Apart from some clunky infodumps and the Holy Hand Grenade bit, The Serpent is an improvement, leading to hopes that Da Vinci's Demons may be moving forward well.

Next Episode: The Prisoner