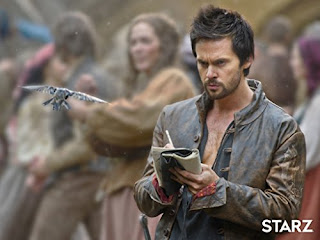 I do not subscribe to premium satellite channels, on account of being poor; therefore, I would not be able to see Da Vinci's Demons airing on Starz until it I opt to get the DVD of the first season (a second season is already in production).  I was however, given a 'free preview' of The Hanged Man, the pilot episode of Da Vinci's Demons.  Despite a remarkably busy schedule, what with school and all, I managed to finish some work early and found time to squeeze in the long-unwatched DVR episode.  After watching The Hanged Man, I see great potential in the show.  It has a charismatic lead and a great setting.  However, some oddball elements within the first episode make me wonder whether Da Vinci's Demons is blending The Borgias and The Da Vinci Code, with a hint of Spartacus thrown in to make a strange hybrid of historic fiction, lots of sex of all stripes, and fantasy.
Leonardo Da Vinci (Tom Riley) is a brash, self-assured genius, and what's worse, he knows it.  Da Vinci is an artist, inventor, and force of nature.  He has managed to avoid getting caught up in the intrigues of Florence's political scene, even though his father Piero (David Schofield), who's never accepted his bastard son, is notary to the powerful Medici family.  Accompanied by his manservant Nico (Eros Vlahos) and his personal gravedigger/friend Zoroaster (Gregg Chillin) Leo goes through life convinced of his genius and his desire to explore all aspects of the world (in this episode, the idea of flight).

Politics, though, dominates the medieval world.  The Duke of Milan (an uncredited Hugh Bonneville) is assassinated in the cathedral, on not-so-secret orders of Pope Sixtus IV (James Faulkner).  Despite that both His Grace and His Holiness liked boys, they were rivals in power: Milan protecting an army-less Florence, Rome their fiercest rivals.  To stop a potential panic and to curry favor with the Florentines, Lorenzo (Elliot Cowan) and Giulino De Medici (Tom Bateman) will sponsor a lavish Carnival to celebrate Easter and the end of Lent.  The typically arrogant Leo gets them to pay more than they have any artisan for a mechanical bird that will begin the celebration by flying on its own and setting off the fireworks.
﻿﻿Leo decides to join the military/industrial complex by offering his services to build war machines.  He gains their favor by sketching a beautiful portrait of Lucrezia (Laura Haddock), Lorenzo's mistress.  However, others have their sights on Leo.  A mysterious figure, known as The Turk (Alexander Siddig), whom Leo saves from police harassment, informs him of secret societies and a mysterious Book of Leaves, containing forbidden knowledge from the pre-Christian world.  Also searching for this book is the Vatican, repository of the occult within its Secret Archives (not to be confused with my review catalog site).  Within the Medici Court is a Vatican spy, and in the end we learn that Leonardo, now seen as a potential threat to the Holy See, literally slept with the enemy.

There are a few things within The Hanged Man that I am not fond of.  First, Da Vinci's Demons' creator David S. Goyer (who also wrote and directed The Hanged Man) is a bit fond of exposition dialogue, where the characters give us information through what they say to each other.  This reaches a curious level when Leonardo is telling the Medici court the reasons, they employ artisans for Carnival.  "Why do you insist on repeating things that a three-year-old already knows?" he is asked.  The obvious answer is that the audience needs to be told somehow, and this seems to be the best way to do it.  For myself, it is always a dicey way of bringing information to us.

﻿
Second, while I'm not bothered with historical inaccuracies in Da Vinci's Demons (this is supposed to be a fanciful take on history, after all), I am not fond of all these quasi-supernatural elements being at the forefront of the series.  Secret societies, esoteric books, the Vatican as the repository of the occult (which at least to me, a non-Catholic, is close to portraying the Catholic Church as somewhat sinister and pushing conspiracy theories about the Church): all these things may be fanciful, but one would think the cloak-and-dagger reality of Renaissance politics would be material enough for a series (example, The Borgias).  I don't know if the real Leo would have recognized this occult world and this idea that he is destined to have a role in this world of forbidden books and mysticism.

Finally, I can understand why so much was blurred in the episode I saw.  Since it was not technically broadcast on Starz, the vast nudity (male and female) presented in The Hanged Man (and I imagine Da Vinci's Demons in general) had to be covered up so to speak.  I can't say I'm surprised by the nudity within the series (this is the same network that lavished blood and boobs on Spartacus), but I am not one that rushes to see naked people.  Given the wild sexual shenanigans going on (particularly with the higher-ups indulging in young boys, while Leo schtupps the lovely, and forbidden, mistress), I do wonder if Leo's own sexual proclivities will eventually get some attention.

However, what I did enjoy in The Hanged Man was the performances, particularly the lead.  Tom Riley is magnetic as the brash, arrogant, self-assured Da Vinci.  His enthusiasm for finding the truth of the world, along with the swagger he has, is great fun to watch.  Riley's Da Vinci carries a great self-confidence, one who never doubts himself, with the way he dominates the screen whenever he is there.  Riley is smooth whenever he is wooing or pursuing Lucrezia, and on the whole he gave a strong performance to where you do want to see more of the show just to see where he takes the role.

Other cast members also give strong performances. Chillin makes Zoroaster a generally fun-loving partner to Leo's actions, while Vlahos' Nico is Leo's somewhat hesitant servant/friend.  Haddock is appropriately alluring and seductive and mysterious as Lorenzo's mistress Lucrezia.  I thought Cowan was a bit too serious as Lorenzo, but perhaps he was generally humorless, so I won't quibble with that.

Goyer has some wonderful dialogue in The Hanged Man that is clever and amusing.  A 'male model' goes up to Leo at a tavern, asking if he'd like to paint him again, saying no one notes his 'form' the way Leo did.  "No one does forms like I do," Leo snaps back.  "Go peddle your form to Boticelli.  He's an easy mark."  One can argue that the effeminate manner of the 'model' being stereotype, but again I won't belabor the point.  When Da Vinci decides to make weapons, he tells Nico and Zoroaster "War has always been the handmaiden of progress."  True enough.

The visuals in Da Vinci's Demons are splendid (though at times the CGI is obvious).  The sequence when Leo is studying birds in flight is excellent: the birds turning into his sketches, the real and artistic blending so well.  In terms of sets and costumes the show is similarly excellent.

I can see why it was decided to move away from strict historic fiction in Da Vinci's Demons.  It might have been seen as a bit dry and there is already another series that takes place at the same time that takes its story straighter (no pun intended).  Whether it will work to add all these somewhat supernatural elements to the Renaissance series I cannot say for sure.  I wasn't too thrilled with the idea that this mysterious figure (perhaps from the future) can predict that "Centuries from now, your own history will also be suppressed".  A little Da Vinci Code reference?  However, the charismatic lead and a curiosity as to what happens next (The Hanged Man does end with a good cliffhanger) makes at least the first episode of Da Vinci's Demons something to raise our interest.

Next Episode: The Serpent 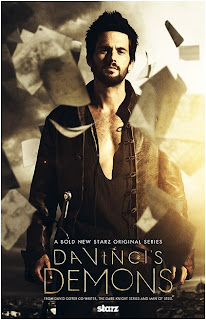