BATES MOTEL: THE MAN IN NUMBER 9

The Many Loves Of Norman Bates...

The Man in Number 9, the newest episode from Bates Motel, confirms to me what I thought about the last episode of the series.  The Man in Number 9 does continue certain story threads, but on the whole it appears to be creating a new storyline for the series.  It keeps up with the notion that White Pine Bay, Oregon, is a flat-out deranged town, and that truth be told, the Bates family will fit right in.

At long last, after Deputy Shelby is gunned down in front of the house adjacent to the Bates Motel, Norma Bates (Vera Farmiga) decides to tell the truth, the whole truth, and nothing but the truth to her nemesis, Sheriff Alex Romero (Nestor Carbonell).  She tells him about Keith Summers', the sex slave, everything.  In what can only be described as a gigantic twist, Romero comes up with a logical and all-encompassing cover story.

Now that we have closed the Summers murder case, everyone can move on.  Norman (Freddie Highmore) still dreams of more romps with Bradley (Nicola Peltz), the girl who took his virginity.  Norma now shifts her attention to her other son, Dylan (Max Thieriot), attempting to smother him to no avail.  He still wants to leave, and despite saving all their lives Norma keeps pushing the issue. 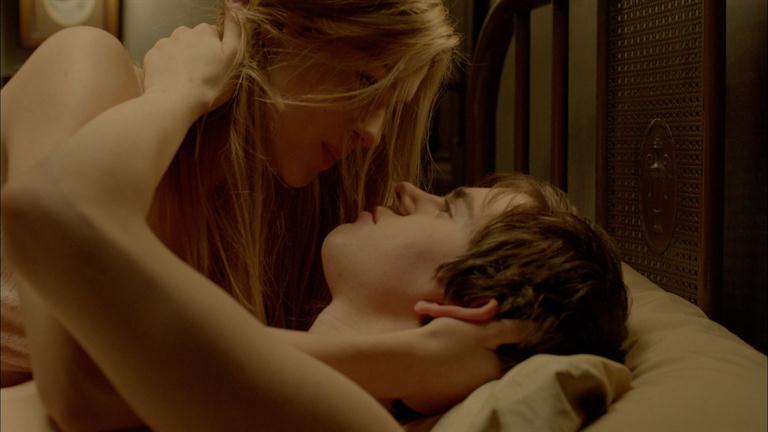 There are other issues that must be dealt with.  The Bates have to get the motel open for business, something that is difficult given that the business has become notorious for all the mayhem going on around it.   Norman has become attached to a stray dog he found underneath the house, and poor Emma (Olivia Cooke) is a bit of a stray herself.

Emma is hurt when Norman feigns illness to not see her (been there, done that).  As such, she and Norma have a little girl-talk, which really means Emma tells Norma about Bradley.  "She's like a locomotive of sexual energy," Emma sniffles.  Norma soon sees what kind of girl Bradley is (read, hot...hot enough to tempt any man, including her beloved son).  The visual imagery of Norman and Bradley indulging in 'pleasures of the flesh' is rather appalling to her, and she decides to have some 'sex talk' with her son, which he doesn't want to hear.

Oddly, Norma is pretty upbeat.  Norma has a customer, a mysterious figure who calls himself Jake (Jere Burns).  He says he had a standing order from the previous owner for a specific room for a week every two months.  Dylan does not trust Jake, but Norma, who has been blackballed because of the Shelby scandal, is desperate for income coming in.   Still, by the end she also suspects something is off with Jake, and Norman's interest in that stray does not help her nerves.

Despite herself, Norma and Emma realize what the sweet but naïve Norman doesn't: Bradley will not break up with her boyfriend Richard for him.  In an eerie sequence, Norman repeats the words Norma gave him about those types of girls.  The stray Norman has fallen in love with gets hit by a car, and now Norman will bring her back to life...Emma's father happens to be into taxidermy.

The Man in Number 9 is the opening salvo in that new storyline.  It's no surprise given that with the Summers' case solved (somewhat), there are few repercussions left (though we imagine there must be).  Instead, we now have a new story with Jake, who is tied to Summers' shady past.

What is fantastic about The Man in Number 9 is the title character.  I remember Jere Burns in his role in the television comedy Dear John as the Lothario who never got any.  Given that, his performance is very restrained, where he maintains total control of himself.  Burns, guided by director S.J. Clarkson, maintains a cold, calculating, and moreover calm performance, of someone who is always in control and won't be rattled.  In other hands, the playing of such a figure as unshakable might have come off as almost parody of the 'master villain', but credit goes to Burns and Clarkson who make Jake a source of control without tipping it to farce.

Cooke still astounds as Emma, the rational and most wholesome person living in town.  She is the girl who likes a guy who is too infatuated with the hot girl to really notice, and Cooke gives a beautiful and realistic performance.  Farmiga still astounds in her performance.  What could be so unnatural about a mother who wants to know the girl who deflowered her little boy?  Still, we also see the creepy part of her personality when she pictures her son and this beautiful girl getting it on.  Norma continues to be a fascinating character: both human and inhuman.  She is genuinely pleased when making Dylan breakfast, as if she is grabbing at a semblance of normalcy.  When Dylan rejects her peace offering, she reacts the way she always does: lashing out with passive aggressive behavior.

I had once thought that the introducing of Thieriot's character (the bad boy) would be a hindrance.  I've been proven wrong, not just with his performance, but with his character.   He is a criminal, but he also sees that Norma is dangerous and what she is doing to his half-brother is equally unhealthy.

What The Man in Number 9 also has are some great lines.  Emma's summation of Bradley's power is already clever, and when Norma is desperate to wash out the blood on the steps leading to her house (a vague suggestion of Lady MacBeth's plea to have 'this damned spot' out), Dylan coldly tells her, "You can't get blood out of a stone, Norma."   Kerry Ehrin's screenplay is strong, intelligent, if a bit overly-symbolic (is the stray dog a substitute for Norman, frightened, desperate for love and a home but encountering disaster).

Also, I was never sure in certain scenes whether it was raining or not.  The rain seemed to come and go within the same scene, but this might be the fault of the cinematography.

Still, judging from The Man in Number 9, Bates Motel still has as many strange stories as there are rooms...

Next Episode: A Boy and His Dog
Posted by Rick at 1:06 AM