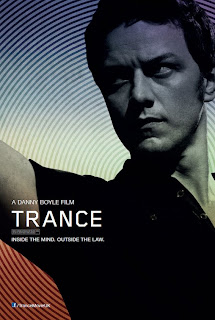 Trance is a well-crafted film that might be a bit convoluted, even illogical if one thinks too hard on it.  However, the film has enough energy and twists to keep the viewer interested, if a bit puzzled by how it all fits together.

Simon (James McAvoy) is a respected art auctioneer.  He tells us of all the security measures the auction house takes to protect the art in case of a robbery.  One of the most important things he tells us is that, "no one's life is worth a painting."  Of course, as it happens when the Goya painting Witches in the Air is put up for sale, there is a daring robbery.  Despite what Simon has told us, he does attempt to be a hero to stop Franck (Vincent Cassel) from stealing the painting.  Franck responds by knocking Simon out cold.  Hailed as a hero, Simon recovers but soon, in one of many twists, Franck wants to see Simon.

The reason is simple: Simon was in on the robbery, but now the painting has gone missing.  Simon is tortured to get the information, but Franck and his crew discover that the blow he gave Simon left him incapable of remembering anything about where the painting is.  Frustrated that Witches in the Air has truly gone missing, Franck and Simon agree to have Simon hypnotized in order to unlock his memory.  Almost at random Simon selects hypnotist Elizabeth Lamb (Rosario Dawson).  She has some success in getting at Simon's memory, but soon she wants in on the action.

From here, Trance goes between a vaguely dream-like world and a dark netherworld of criminal activity.  Elizabeth convinces the gang that Simon is unconsciously terrified of them, which is why he won't give up the painting, not because he doesn't want to, but because he won't admit he is afraid of what will happen to him if he does.  Simon soon starts finding himself emotionally drawn to Elizabeth, and Elizabeth perhaps feels the same, but she also is starting to sleep with Franck.  As Simon's memories start unlocking, we see that his former gambling addiction is at the heart of the mystery, and that the tangled lives of the three leads are connected in far more bizarre ways than at first imagined.  In the end, while the painting is discovered, it is not without a high cost in lives and perhaps sanity.

HERE IS A MAJOR SPOILER.  YOU HAVE BEEN WARNED. 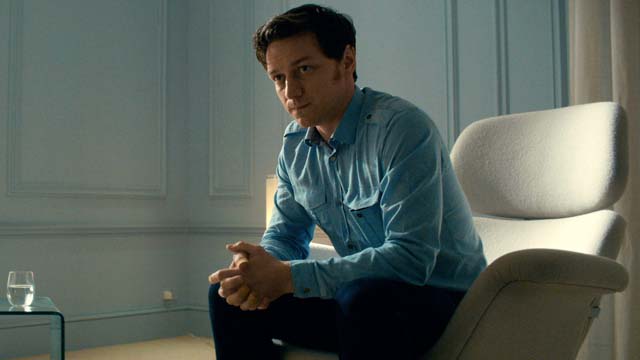 There was one element in Trance that if examined makes everything fall apart in terms of actual plot.  The painting is discovered along with the decomposing body of a young woman (Tuppence Middleton) who tries to help the injured and confused Simon when he staggers out of the auction house but who in his confusion Simon strangles.  When we get the 'shocking' conclusion in Joe Ahearne and John Hodge's screenplay (from Ahearne's story), all I kept wondering was how this woman could go months without anyone searching for her or her car.  In a town as surveillance-happy as London, one would think that the vehicle of a missing woman (a woman who would have been missed by someone) would have been easy to trace.  If they find her vehicle, they find her body and the painting, and thus they find the cases connected.  If the cases connected, all they need do is find the connection, which could be Simon.

I could not buy that no one was looking for, as the credits bill her, The Young Woman in the Blue Car.

Given this odd leap of logic, I think that Danny Boyle was not going for logic.  Trance was going for visual panache, which it does deliver to varying degrees of success (having Franck's head shot off but continue a conversation is hallucinatory, having Elizabeth appear nude and shaved for Simon's pleasure is sexist, and having Simon nearly bare all does not make things equal).  So much of Trance appeared to be almost dream-like, as if the story were really taking place within Simon's mind, that the plot is almost irrelevant.


However, that element of the plot, that Elizabeth herself was more deeply involved in both the heist and with Simon in particular makes me question why she would put herself in this dangerous situation with a group of dangerous men.  That also didn't make sense to me.  However, again I imagine that Trance wasn't strictly suppose to make logical sense.  Instead, it was to be more a mental exercise in mixing visuals with so many twists that the story itself gets confused.

In terms of performances my admiration for James McAvoy continues to grow and grow.  There are few actors who can play both innocent and menacing within the same movie and be equally convincing in both roles.  He did the same with Wanted, and in Trance McAvoy conveys gentleness and danger with equal believability.  We get a sense just in the opening, where he not only narrates the security procedures but looks you straight in the eye that behind his blue eyes there is something sinister, something not quite as sweet and naïve as he appears to be.  As the tortured thief, the trapped gambling addict, the innocent victim of his vices, McAvoy convinces you this man is real.  It's a great performance from a great actor.

I can't say I'm a big Rosario Dawson fan, but she did a wonderful job with the complex script she was given.  She makes Elizabeth go from dutiful hypnotherapist to lovelorn victim to ultimate victor seem a natural progression, and she too did a better job than perhaps she has been given credit for.  Cassel has turned villainous roles into compelling ones, and here he did an impressive job as the ruthless Franck.

In terms of the script while some things were clever and made sense (for example the reason as to why Simon attempted to stop Franck from completing the theft as planned despite the danger it posed Simon), the actual resolution didn't hold up to examination.  Anthony Dod Mantle's cinematography is quite beautiful without overwhelming the story, and Rick Smith's score is well-executed to fit into the frenzied world of the film.

Trance is trying too hard to be clever, and in its efforts it gets a bit lost within its own story to where you do question the logic of it all.  However, it is an entertaining film with strong performances by the three leads that keeps you interested, with strong visuals to keep the story going.  The story may not make much sense, but if one puts that aside Trance will hypnotize.