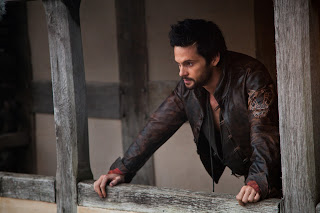 What can be more fun than demon-possessed nuns? The Prisoner makes the case that Da Vinci's Demons, removed from the more ahistorical and supernatural elements, may be more than just eccentric fantasy.

As Riario (Blake Ritson) plays a board game with a mysterious robed prisoner, we see that they may be subtly referring to the evil at a convent near Florence. There, many nuns appear to be possessed by demons, convulsing and shrieking. One managed to get to Florence, where she horrifies Guiliano de Medici (Tom Bateman) and former nun Vanessa (Hera Hilmar) by cursing the Medici family and gouging her own eye out with Guiliano's sword.

Guiliano's brother Lorenzo (Elliot Cowan) has more pressing matters on his hands: uncovering the spy within the Medici court. However, he knows that reports of demonic possessions could play into his enemies' hands, so he sends Guiliano and his weapons manufacturer Leonardo da Vinci (Tom Riley) to investigate the strange goings-on. Is it the work of the Devil or is there a more worldly, malevolent force at work? As Vanessa herself falls under the mysterious ailment, will Leonardo be able to save her before the convent and the possessed are set aflame? The answer may literally be at St. Anthony's feet, but even after the resolution, visions still hit our lusty artist. 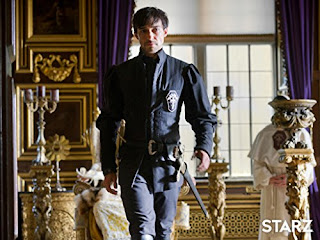 The Prisoner is the first Da Vinci's Demons episode where the fantasy elements were mostly toned down. The end still managed to bring up some crazy visions but on the whole, it stayed close to the ground. A great deal of this is due to having Leonardo use logic to sort out what appears to be a confounding supernatural mystery.

The episode may have mostly centered on the convent of possessed nuns, but it also managed to include both the production of weapons, the continued machinations at the Vatican, and even the false allegations against the loyal Medici advisor Becchi (Michael Elwyn). These came in and out from the central story, but they never interfered with it.

The Prisoner also allowed Bateman's Guiliano his moment. He comes across as dim, hotheaded but courageous, a man of his time who would rather fight than negotiate. As he attempts to sort out the various works of the Devil around him, Bateman crafts Guiliano as the brother who while loyal cannot help feeling a bit inferior to Lorenzo. Riley and Ritson continue their strong performances as the rivals headed towards a showdown.

However, I found The Prisoner the best episode yet of Da Vinci's Demons. How or if the series will improve later in this season remains to be seen.

Next Episode: The Magician