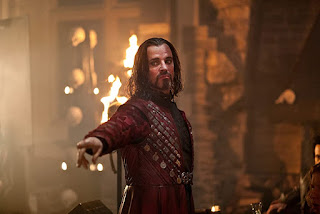 The Devil is by no means a bad Da Vinci's Demons episode. However, even by the increasingly bonkers standards of this ahistorical fantasy series, it is hard not to chuckle at the thought of Leonardo da Vinci facing off against Dracula.

Leonardo da Vinci (Tom Riley) now seeks out a cartographer who can help him decipher clues to the mysterious land where the Book of Leaves is hidden. Said cartographer, Solomon Ogbai or The Abyssinian (Shaun Parks) is being held prisoner by Vlad Tepes himself (Paul Rhys), better known as Vlad the Impaler or Vlad, Son of the Dragon.

It is Dracula himself with whom Leo and his friends Zoroaster (Gregg Chillin) and Nico (Eros Vlahos) must match wits with. Dracula, however, will not be so easily disposed of. As he has renounced God, offers toasts to Lucifer and lets his dogs devour prisoners of war, Leo will have to more than match wits with the potentially unholy undead.

Meanwhile, Lorenzo de Medici (Elliot Cowan) has his own issues to deal with. There is his pimping out of his brother Giuliano (Tom Bateman) to marry into the Pazzi family and forge an alliance with their bitter rivals. There is his negotiation with Federico, Duke of Urbino (Vincent Riotta) to join forces and push against Pope Sixtus IV (James Faulkner), who himself is plotting with the Pazzis against the Medici.

Guiliano for his part is investigating who the spy in the Medici household is, bringing him closer to unmasking his brother's mistress Lucrezia (Laura Haddock) as the spy. He also begins his own affair with ex-nun and current bar-wench Vanessa (Hera Hilmar). Sixtus is enraged over how in his eyes everyone around him has bungled things. His wrath spares no one, not even his nephew Riario (Blake Ritson). Lucrezia, no longer useful to Rome, is to be killed.

As for Leonardo, while he cannot save the Abyssinian this time, he does get the clues needed to begin his journey. 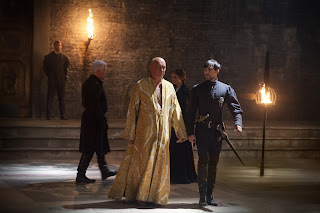 As I think on it, the title character in The Devil may not be Dracula himself. I never thought to write the phrase "naked homicidal Pope" but how else to describe His Holiness Pope Sixtus IV as he tries to drown his henchmen in his bath and beats Riario senseless? It is par for the course in the bonkers world of Da Vinci's Demons.

Dracula, however, is not, and while certain liberties can be taken on a show where past, present and future float about at will, Leonardo da Vinci fighting Dracula still looks a little loony even here.

It is not helped by guest star Rhys' performance. I have to give some leeway into how camp the whole setup is, but Rhys seems to be not bothering to try and make this already crazed idea look remotely rational. Instead, he goes all-in on the cray-cray, camping it up to mad abandon. In fact, I think The Devil let everyone a chance to overact.

The Devil almost delights in being opaque (and yes, I can see a double meaning in that phrase). Even Leonardo comments on this when seeing a vision of himself with Ogbai, wryly commenting that the Sons of Mithras never seem able to give a straightforward answer.

Perhaps in retrospect, I should be more lenient towards The Devil (again, an odd turn of phrase). However, Leonardo da Vinci literally crossing swords with Dracula and naked homicidal Popes seem a bit much for me.

Next Episode: The Hierophant