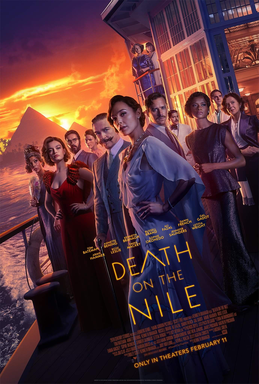 DEATH ON THE NILE (2022)
After a series of delays due to everything to pandemics to allegations revolving around one cast member's alleged interest in cannibalism, the second of Sir Kenneth Branagh's Hercule Poirot films is finally before us. Death on the Nile is darker than most Agatha Christie adaptations, but despite some issues does entertain.
World War I veteran Hercule Poirot (Branagh) is now feted as the world's greatest detective, though he still has scars both physical and psychological. Ostensibly on holiday in Egypt, he runs into his old friend Bouc (Tom Bateman), whom he last encountered in the case on the Orient Express. Bouc, traveling with his mother Euphemia (Annette Benning), is part of a wedding party. The newlyweds are fabulously wealthy heiress Lynette Ridgeway (Gal Gadot) and penniless but hunky Simon Doyle (Armie Hammer). They are passionately in love, but there is a shadow to this happy honeymoon: Simon's jilted ex-fiancée Jacqueline de Bellfort (Emma Mackey). Jackie manages to find our lovebirds everywhere, forever silently taunting them.

The Doyles ask Poirot to intercede, but to no avail. They think they have escaped Jackie once and for all when they chart a ship down the Nile, but there is evil at work on the Karnak. Someone in the wedding party appears to want Lynette dead, one who has succeeded in this wicked act. Jackie is the likeliest suspect, especially since she shot Simon, but her alibi is solid when it comes to Lynette.
Therefore, whodunit? Is it Lynette's former love interest Dr. Windlesham (Russell Brand)? What about her Communist godmother Marie Van Schuyler (Jennifer Saunders) or Marie's nurse, Bowers (Dawn French), who holds a secret grudge against the Ridgeways? The suspect list even involves the entertainment: blues superstar Salome Otterbourne (Sophie Okonedo) and her niece, Rosalie (Leticia Wright), who is Lynette's friend. The loyal maid Louise (Rose Leslie) is a good suspect, as is Lynette's cousin/business manager Andrew Katchadourian (Ali Fazal). Even Mother and Son Bouc cannot be eliminated as suspects.
As bodies start piling up, Poirot finds himself facing off both a puzzling case and his own past demons. The ultimate revelation of who is behind three murders does not help Poirot heal his wounded heart, nor in a thwarted romance with a passenger. However, as six months pass from the Death on the Nile, there is still a faint glimmer of hope for our Belgian sleuth.

Death on the Nile is a surprisingly dark tale, made darker by Branagh and screenwriter Michael Green to turn Poirot into a more fleshed out figure. No longer just a man who uses his "little grey cells" and is mostly removed from affairs of the heart romantic or fraternal, this Poirot is a man who has seen friends and lovers die. I don't think we have seen a darker Poirot on film or television. It boggles the mind that the doofus clown from The Alphabet Murders would be a haunted man capable of enacting revenge.
In certain ways, Branagh's Poirot gave the actor a chance to show a more dramatic side. It's a deeper version than most Christie readers have seen, and I think he did well in the role. At the climax of his revelation, when he struggles in remembering one victim, we see the pain Poirot is in. We see this also when he sees the surviving passengers exit the Karnak, the last one especially hard for him.
As an actor, Branagh did especially well. As a director, he indulged a bit too much in both visuals and performances. Death on the Nile has a rather lengthy dance scene that, to be fair introduces the love triangle, but makes one wonder if Branagh secretly wants to make a musicale erotique. The dry humping Simon did with both Jackie and Lynette bordered on the pornographic. It also lengthened the film unnecessarily. It took much longer than needed to get the ball rolling, and while it does pick up once the Karnak sails, it takes its pretty time getting there. 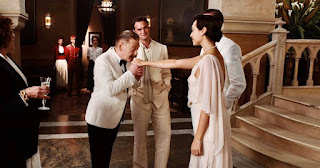 Death on the Nile also has some frightfully bad performances. Before he was shunted off for wanting to allegedly do his own version of Cannibal Holocaust, Armie Hammer showed himself to be just dreadful. His whole performance was just bad: his accent, the excessive manner, his accent, all made Hammer's hamminess horrendous. Mackey's Jackie was no better: too tight and obviously evil vs. wounded, she almost goaded you to hate rather than sympathize with her. Gadot was probably the best of the three here, but not by much: she too felt too forced as the pampered diva.
Much better were the supporting cast. Bateman surprised with his strong performance as the genial Bouc, the Watson to Poirot's Holmes. He had strong moments with Wright, Bouc's love interest in the film. Delightful throughout, he was a highlight of Death on the Nile. French and Saunders, normally a comedy duo, did very well as the more dramatic pair, and I genuinely don't understand the criticism of their roles. They did allow little moments of levity to come in (particularly when Saunders' Commie biddy brings up the issues of the proletariat while feasting on champagne), but they showed strong dramatic skills.
Brand and Benning were somewhere in the middle: sometimes able to be dramatic, sometimes going a bit overboard. 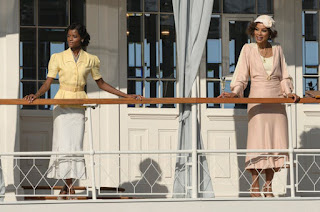 The clear standouts were Okonedo and Wright, and here is a case of diverse casting done right. They played an American blues singer and niece/agent, allowing them to come in with a more plausible reason than just being there for diversity's sake. The racial issues the characters faced were addressed, but they also gave the other characters a chance to not be virulent racists. Okonedo's brassy yet strong Salome was not only nobody's fool, but a strong foil for our Belgian. Wright's American accent may have been a bit off, but she too more than held her own.
Moreover, the interplay and flirtation between Salome and Hercule was delightful. It makes one not only long for a standalone Salome film but a chance for Salome to be the Irene Adler to Hercule's Sherlock Holmes.
Death on the Nile also does well in its set design and costuming, though the green screen at times was so obviously fake you'd think it was done at an amusement park versus a major film.
Still, on the whole I found Death on the Nile good while much longer than it should have been. More dramatic than the usual light entertainment most people think Agatha Christie adaptations are, apart from a few performances and its length this is a journey worth taking.
DECISION: B-
Posted by Rick at 6:14 PM