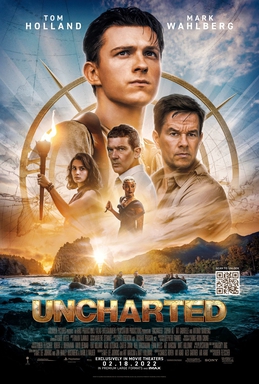 UNCHARTED
We are barely into 2022 yet I think Uncharted may be my Biggest Disappointment of the Year. I had never heard of the video game on which it is based on, but given how lackluster the entire film is, I am both not interested in playing the game or in seeing more films that Uncharted teases it will spawn.
Young bartender/petty thief Nathan Drake (Tom Holland) is recruited by shadowy fortune hunter Victor "Sully" Sullivan (Mark Wahlberg) to help him find a vast treasure hidden by the survivors of Ferdinand Magellan's crew. Sully thinks Nate can help him due to his past work with Nate's long-lost brother Sam.
Going against them are the wealthy Moncada family who feel the treasure is their due and later on, Chole Frazer (Sophia Ali), Sully's frenemy who sometimes helps, sometimes hurts his search. Santiago Moncada (Antonio Banderas) has his own treasure hunter to help his cause: Braddock (Tati Gabrielle), who also has a past with Sully.
As the nearly clueless but remarkably agile Nathan goes from New York to Barcelona to the Philippines in search of the treasure, he continues his main mission of finding Sam. Everyone seems more than capable of betraying everyone else, but ultimately Nathan and Sully manage to get little bits of treasure despite major obstacles.
In two post-ending scenes, we find Sam is alive but imprisoned and Nate & Sully are on another treasure hunt, when just as they are about to escape with a map, they come upon another figure which I figure we would see in a sequel. 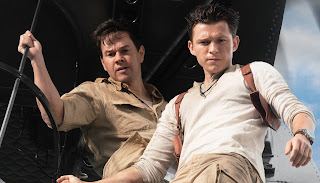 There are two ways to adapt something like Uncharted. You can go the straight route and make it a serious action/adventure where you take the time to introduce the characters, set up the story and handle things more seriously. You can, conversely, embrace the silliness of it all and make Uncharted fun and zippy, not taking itself seriously and being a bit of an escapist lark. Uncharted never decided which it would be, so it opted to throw everything and hope something would work.
What you ended up with was a pretty boring film, where things move because they had to. Not only that, but things also moved in an expected way. You know Chloe can't be trusted. You know the various escapes will have complications. You know there will be quips between Sully and others. You know Sam is alive. The few things that are different do not appear to make any sense: a major character is killed off but with no logic apart from "Actor X, already cashing a paycheck to be in this rubbish, does not want to be around for any potential sequels".
For an action/adventure film, Uncharted is so sluggish. There is a lethargy to everyone's performances that I wouldn't blame them if they had literally fallen asleep during a take. What should be fast paced seems to almost amble on. Take for example when Nate and Chloe are trapped in water. Their only rescue is Sully, but he's too busy fighting Braddock to attend quickly to Nate and Chloe. We should feel their lives are in danger, but somehow, everything played so slowly you feel nothing. 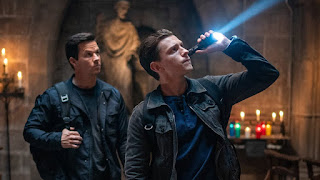 That sluggishness goes to the performances. Tom Holland showed great promise in The Impossible, but ever since he became our friendly neighborhood Spider-Man, he's been coasting and slumming through his career. In the film's opening, we see Nate dangling from an airplane cargo and when he knocks someone to his death, Nate immediate shouts, "Oh my god, I'm SO SORRY!". Uncharted does not push him in the acting department, which he may have wanted. However, did he want to play a webless Peter Parker knockoff?
At one point, Nate asks Chloe when she wanted to be "Indiana Jones", and a bit of me was wondering if he was going to call it "a REALLY OLD MOVIE". Later, when Sully mocks Nathan for ordering a martini, I thought it was a waste to not have him say to make it shaken, not stirred.
Wahlberg, to my mind, has never been an actor. He just parlayed his youthful physique into a successful film career where he plays the same type: snarky action star. He looks bored trying to sound clever and quippy, but to be fair he does manage to acknowledge being 50 years old (at one point he admits not being able to read something because he doesn't have his reading glasses).
As a side note, Wahlberg is literally twice Holland's age, meaning that Nate's treasure-hunting partner is old enough to be his father! Whether or not Uncharted wanted to draw attention to this in their mostly forced interplay I cannot say.
Banderas is there to cash a check and is relishing hamming it up for all his paycheck was worth. Ali and Gabrielle didn't so much phone it in as texted it in. It's a sad sign when you know someone of importance is making a cameo, but you have no idea who that person is or why we should care.
There are some good parts in Uncharted: the airplane sequence was well-done even if it was CGI. On occasion Wahlberg and Holland were able to bring some self-deprecating humor. When Sully tells Nate to make themselves small, "or in your case, smaller", Nate snaps back, "You're only an inch taller, tops!". If IMDB is correct, Nathan Drake is right: Tom Holland's 5' 7.5" is only a shade less than Mark Wahlberg's 5'8".
I wanted to like Uncharted, to embrace it as goofy fun. I could have forgiven how illogical it was (500-year-old wooden ships in perfect working order, how Sully spirited away a valuable cross with Nate able to also easily escape). What I could not forgive was how boring it all was.
Worse, we get promises of sequels, an arrogant statement for something so dull as Uncharted. This Goonies/National Treasure/Indiana Jones mishmash has nothing going for it, and while I know audiences loved it, I do not want more of Drake's takes.
DECICION: D-