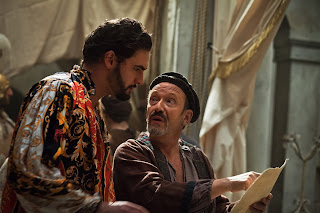 DA VINCI'S DEMONS:
THE TOWER
What's a little sodomy amongst friends? The Tower tackles that most controversial of Leonardo da Vinci topics: his sexual orientation. With clever, shocking writing and some fine performances, The Tower moves quite well.
Leonardo da Vinci (Tom Riley) is imprisoned for the crime of sodomy. This allegation could not have come at a worse time for the Medici, who want the royal patronage of Spanish monarchs Ferdinand (Philip Arditti) and Isabella (Lydia Leonard), along with their confessor, Torquemada (Peter Guinness). The prudish couple finds Florence a cesspool of decadence and debauchery. Therefore, why not entertain them with a performance of the raunchy Decameron? Lorenzo (Elliot Cowan) is horrified, but for once his brother Giuliano (Tom Bateman) wins this battle.
Struggling in his own battle is Leo, who appears to have gone bonkers in isolation. He finds that the charges have gone from mere sodomy to sorcery, and if convicted nothing will be able to save him. The kangaroo antics of the Magistrate outrage even Leo's disapproving father Piero (David Schofield), a stickler for the rule of law and proper order. How will Leonardo escape his prison? Even if he does (hint: he does), how will he escape the charges?
Simple: by finding something that is worse than sodomy or sorcery. The Magistrate finds himself literally hog-tied, and with that, Leo lives to fight another day. 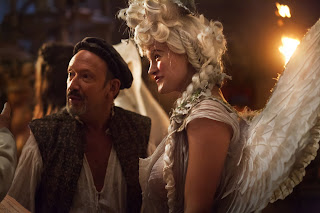 The Tower tacitly acknowledges what has been speculated but never fully confirmed: that Leonardo da Vinci had varied sexual tastes. Da Vinci's Demons has shown him many times getting hot and heavy with Lorenzo di Medici's mistress Lucrezia Donati (Laura Craddock), but this is the first episode where there is even a hint that Leo may be at the very least bicurious. We see this at the end when Jacobo Salterelli (Christopher Elson) a male model dragged into court over the sodomy charges shows Leo the drawings Leo did of him, drawings of a most erotic nature. Leo tells the model he will find someone else to love and they share a kiss.
Whether da Vinci in real life was gay, bisexual, bicurious, asexual or all of the above only he knows. I think there was early criticism of Da Vinci's Demons because it did not delve into Leo's private life apart from his almost nymphomaniac humping of Lucrezia, but this is fantasy. As such, I don't see it as an issue, let alone a major one. The Tower, at the very least, leaves the door open for more same-sex schtupping, but that is not the focus of the episode.
Instead, it is on the inventive nature of da Vinci, and The Tower certainly shows a wild side to his inventiveness. Essentially, Leonardo da Vinci invented an early version of the Bat-Signal and photography. The scene where the Magistrate appears to be involved in bestiality may shock, but it does show that a mad (as in angry) Leo may not be far off from a mad (as in crazy) Leo.
The Tower has some fine bits of dialogue, ones that Tom Riley speaks with wild abandon. "I'm desperate, enraged and in need of a good meal, but I'm NOT mad!" he tells his friends when he's escaped. Asked later what he craves, he winkingly replies, "The Magistrate's ass". 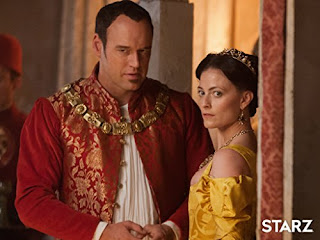 The Tower's dialogue also extends to the secondary plot of the Spanish monarchs visiting. Lorenzo explains to a surprised but interested Ferdinand how their patronage system works. Later on, Ferdinand admits he was forced to marry his unattractive cousin and finds the ability of ordinary people to speak to their leaders fascinating.
The bawdy nature of the Decameron, and the Medici brothers literally fighting over it also make for good viewing. The sets, particularly the court where the case is being tried, are impressive.
We also see actors doing quite well. Schofield shows a slightly more caring side to Piero. He still disapproves of his son, but he equally disapproves of how the trial is clearly stacked against him. Whatever Piero's faults, he holds the law as sacrosanct, and is outraged at anyone being railroaded.
The Tower moves our story forward while standing on its own. It is a well-crafted, well-acted episode that had some issues (it made little use of Torquemada), but on the whole did well.
Next Episode: The Devil
7/10
Posted by Rick at 2:22 AM