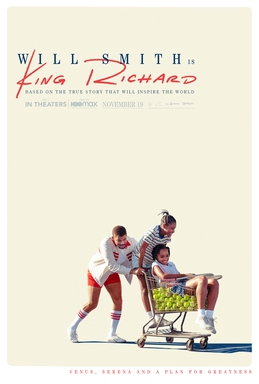 At first, I was confused as to why people opted to make a biopic not of the tennis stars and siblings Serena and Venus Williams but of their father, Richard. Not being versed in tennis lore, I was unaware of who Richard Williams was, let alone how he impacted the game. King Richard doesn't make the case that his life story deserves to be as long as it is. It is, however, a properly pleasant hagiography that should entertain people seeking inspirational stories.

Richard Williams (Will Smith) has one goal in life: to have two of his five+ children be tennis stars. They are his daughters Venus (Saniyya Sidney) and Serena (Demi Singleton), whom he has drilled probably since before birth. Richard's wife Oracene (Aunjanue Ellis) quietly supports his plans though she also disapproves of Richard's bulldozer manner with family and coaches alike.

He hustles to get Pete Sampras' coach, Paul Cohen (Tony Goldwyn) to train Venus for free (Serena, alas, will have to wait her turn). Even here though, Richard can't help interfering, his superiority pushing everyone around. Richard makes the controversial decision to pull his talented daughters out of Junior tournaments. He then gets another coach, Rick Macci (Jon Bernthal), eager to train the exceptional Venus but also displeased at some of Richard's manner. Finally, it is time for Venus to turn pro at 14 and take on the Number One female player, Arantxa Sanchez Vicario, where Venus loses and wins. 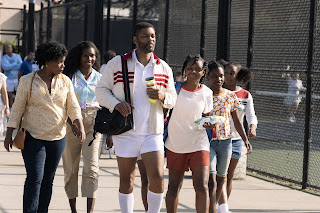 There is one long problem with King Richard. It is close to two-and-a-half hours long. For comparison, Dune is only eleven minutes longer than King Richard, and it should be remembered that Dune is meant to be a massive, epic film. King Richard's length forces us to endure long scenes that add little to what story it is trying to say.

Take for example Venus' first Juniors competition. We get treated to endless montages of sore losers and spoiled sports, girls always scowling and yelling about losing. I figure their antagonistic reactions are meant to be a counterpoint to the Williams sisters more confident, upbeat manner. However, you felt that the editing could have cut down the time. Same with the road trip from Compton to Florida.

It should be noted that King Richard is produced in part by Will Smith and the Williams sisters. As such, we won't be getting many if any hints that Richard is anything less than a great man with a smidgeon of flaws. There is brief mention about Richard's other children, a detail that comes out of nowhere and is not mentioned again. Few people if any appear able to stand up to Richard, and worse, King Richard does not make the case as to why non-tennis fans should care about Richard's life. 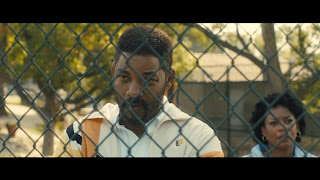 Acting-wise, it becomes something of a guessing game to see which part of Smith's performance is meant to be his Oscar clip. From the very beginning Smith is very "actory" in his manner. By that I mean calculating, methodical, not so much playing Richard Williams but playing a man aiming for Academy Award recognition a la Eddie Redmayne in The Theory of Everything (albeit less overbearing). It is still showy in manner, with his curious accent and speaking manner. You can't help but cringe a little when swelling music starts to play as Richard respectfully tells off a Child Protective Services agent who came to their house.

As to why their neighbor apparently hates them so much for her to do such a thing is unanswered.

For some reason, when he tells an agent he suspects is racist "I just ax a simplified question", it sounded peculiar separate from the curious syntax. To me, it came across as forced, as if Smith was not so much trying to sound like the real Richard Williams but some version of a "less-educated and cultured" man. To be fair, I do not know what Richard Williams sounds like and Smith may be accurate (though given the requisite real-life clips at the end I didn't hear much if any similarity).

In some ways, King Richard makes him less heroic than the film would like us to see. He was close to killing a man and comes across as a bullying Little League parent. It isn't until late in the film that we get a reason as to why Richard picked tennis to be his daughters' future. For most of the film, it seemed he just picked that sport at random.

It is a shame that Will Smith is taking up so much Oscar talk, for if there were any justice it would be Aunjanue Ellis who would and should be the focus. She has her own requisite Oscar clip (when she quietly but firmly tells her husband that he is too overbearing to mask his deep-seeded fears that he may be a failure). However, it is the quiet strength she communicates that holds the viewers' attention.

Berthal does well in playing against type as the more chipper Macci. Usually cast as a more brooding figure, it is nice to see Berthal playing less intense man who is eager to please and generally happier.

The story of the Williams Sisters and their impact on both the sport of tennis and greater inclusion is worth knowing. King Richard, while almost harmless, does not make the case as to why their father is of such great importance.