White Shadows in the South Seas: A Review 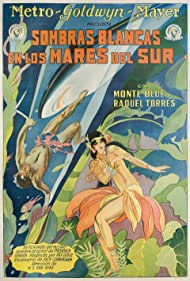 WHITE SHADOWS IN THE SOUTH SEAS

The South Seas have always attracted travelers due to its geographic beauty and foreignness. White Shadows in the South Seas is surprisingly progressive for the times, even if it does indulge in a little stereotyping on both sides.

Disillusioned white doctor Matthew Lloyd (Monte Blue) is appalled by how the white man have destroyed the beauty of both the Marquesas Islands and its people. He is shunned for his views as well as his drunkenness. The colonizers are so irritated with Lloyd that they shanghai him on a bubonic-filled ship and cast him adrift.

Fate, however, smiled on Dr. Lloyd, for he washed ashore on another remote island, where the local community welcome him as a White God. He does not dissuade them from their idea, only pausing when told that the beautiful native girl Fayaway (Raquel Torres) is forbidden to him. She is "tapau", a virgin bride of the temple whom not even Matta Loa can look upon.

Things take a turn though when Matta Loa saves Fayaway's little brother, but like all white men, his greed soon takes over. Appalled now that the islanders cast pearls aside in place of the material the oysters provide to shape fishing hooks, he starts hoarding and diving for them. He goes so far as to try and signal a ship but repents when he sees how the new visitors will destroy the community as they have all others. Repentant, he tosses the pearls and gives his life to try and save the community, but like all white people, he knows only greed and destruction. 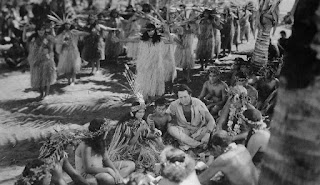 What is surprising about White Shadows in the South Seas is how the film sees whites as the embodiment of evil. I figure there are people now who would agree with that assertion, but this film is from 1928. Long before such concepts like "white privilege" came about, we see in the film that the arrival of Anglos was not a blessing but a curse. Lloyd sees how the greed of his fellow whites is literally killing the original inhabitants. The rapid change of sea pressure causes havoc on the young men's lungs, and White Shadows in the South Seas, almost documentary-like, shows how this "last remnant of an earthly paradise" was brought to ruin.

Perhaps this is why I am puzzled by Lloyd's shift. He starts out horrified by how the colonized were treated, so much so that he responds to a fellow Anglo how rather than bringing shame to the white man HE was ashamed to be white. However, while living in peace and happiness with the new natives, his personality change seems more for dramatic effect.

"Pearls! He was only a white man, after all -- no good --and the instinct of his ruthless race was his -- Greed!" the intertitles say. I was not completely convinced that Lloyd could change so much, especially given his successful romance with Fayaway. Moreover, there seems something odd about ascribing the aspect of "greed" to someone solely based on that person's race.

That again may have been to create conflict and allow for our "white savior" to have a moment of redemption. However, White Shadows in the South Seas is less about interracial relationships than it is about capturing the beauty of the Pacific Islands on film. 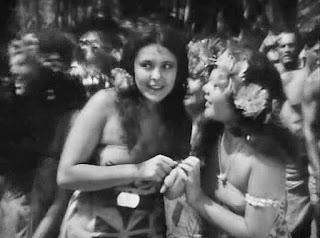 White Shadows in the South Seas won the second Academy Award for Cinematography, and one can see why. The film has some beautiful and impressive sequences, particularly the underwater scenes where the young men dive for pearls. It helps that the film was "produced and photographed on the natural locations, and with the ancient native tribes of the Marquesas Islands in the South Seas" as the text states.

The film showcases what one perceives are the traditions of the islanders, such as the elaborate welcoming ceremony for the white god. The lavish meal includes "the Dancer of Ceremonious Welcome", and here the film could be seen as almost documentary-like. I figure the entire ceremony may have been created for the film, so White Shadows in the South Seas is hardly a documentary. However, some scenes are quite visually splendid.

The acting is mostly hit. Monte Blue does have some of that cliched theatrical overacting that silent film is spoofed about, but there are moments, particularly when he expresses disgust at his fellow colonists' manner, where he shows more range. In retrospect, casting the half-Mexican Torres as the "native girl" is a product of the times, and while her acting was good it still does not sit well to have a non-Tahitian playing one. They play off each other well and make bird imitations look romantic.

White Shadows in the South Seas is a silent film in that there is no audible dialogue, but it does have synchronized sound. Everything from the "native music" to bird calls matches the film to where it becomes a precursor to sound.

White Shadows in the South Seas has some beautiful and impressive imagery and with an interesting story where the white shadow is held in a bad light. Sometimes a bit overdone, it still mostly holds up.