What's the Matter with Helen?: A Review 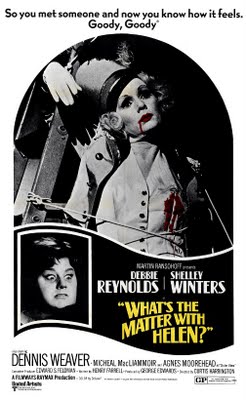 WHAT'S THE MATTER WITH HELEN?

Who would want to murder Debbie Reynolds? That is one of the mysteries in What's the Matter with Helen?, a curious effort that shows the so-called "hagsploitation" genre did not skip America's Sweetheart.

After the convictions of their sons for a brutal murder, Depression-era widows Adelle Bruckner and Helen Hill decide to move to California and start again. Now as Adelle Stuart (Reynolds) and Helen Martin (Shelley Winters), they have a dance school for wannabe child stars: Adelle teaching dance and Helen as pianist.

There is evil at work, however, as the past is never far behind. Someone is calling them by their real names. Could it be the loquacious Hamilton Starr (Michael Mac Liammoir), who pushed his way into being the school's elocution teacher? It can't be Lincoln Palmer (Dennis Weaver), the wealthy father to one of the aspiring Shirley Temples who starts a romance with Adelle. As the excessively religious Helen starts struggling with her fears and desires, Adelle asks "What's the matter with Helen"?

Things come to a head when Helen finds herself killing an intruder who knows her real name. Adelle is forced to rejoin her frenemy but now with her on the cusp of becoming the next Mrs. Palmer, the situation comes to a shocking conclusion. 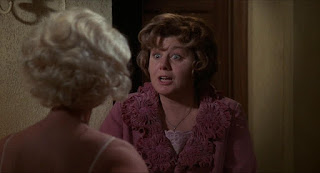 To be honest, it isn't all that shocking, but it is almost pleasantly schlocky. What's the Matter with Helen? started out well, as if both Reynolds and Winters were making an effort to take this seriously. Perhaps, however, things started going downhill when Hamilton Starr comes into the picture. Mac Liammoir is camping and vamping it up to the Nth degree, almost as if he is from some other film that wandered into this one. It's such a cartoonish performance that one almost admires how he just went all over-the-top and never let up, even when he's helping a clearly unhinged Helen.

It is curious that until we get well past the halfway point What's the Matter with Helen? already has some pretty bonkers scenes that are scarier and spookier than Helen's mental deterioration.

The "Adelle's Kiddystar Revue" is startling on so many levels. The sequence opens with a staging of Animal Crackers in My Soup from the Shirley Temple film Curly Top. The various tyke singing and dancing up on stage is bizarre: various children dressed as animals while Linc's daughter mimics Temple to end up looking like an auto-animatronic figure. After that, another future star belts out Oh, You Nasty Man in the Mae West style. You are left virtually stunned that this little girl is so openly sexual, down to the vocal inflections.

The musical numbers conclude with a tribute to "our President, Franklin Delano Roosevelt". While everyone taps their heart out to John Phillips Sousa's Stars and Stripes Forever, all I could think was that the adulation FDR got bordered on idolatrous. 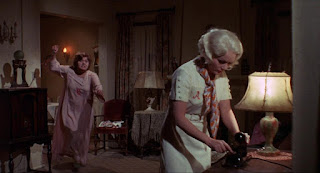 Perhaps credit can be given that the lesbian aspects of What's the Matter with Helen? was not overplayed but were pretty obvious. Helen, despite her almost crazed faith in radio preacher Sister Alma (Agnes Moorehead) it's none-too-subtle that Helen is in love with Adelle. Her jealousy over the Adelle-Linc relationship could be passed off as mere suspicion, but what to make of Helen clutching and smelling Adelle's corset? She beat a similar scene in Brokeback Mountain by thirty-four years.

Moorehead acted mostly as a voice on the radio, having only one scene where she's on screen. I figure she thought What's the Matter with Helen? was an easy paycheck given she was there only to see Helen go bonkers. To her credit Reynolds did make the effort to make things believable, though at times she too went a bit into camp. Sometimes she brings out Adelle's vanity and desires well. Other times she seems a bit too dramatic.

It is, however, Winters who seemed to be unsure if Helen really was crazy or merely paranoid. Winters can't seem to decide if Helen is merely lost in her own fears or a wrathful lesbian who won't let the object of her affection go.

What sinks What's the Matter with Helen? is Henry Farrell's script. It wants to be shocking but ends up illogical. Take for example the man Helen killed. Given how the situation played out I would have declared it justifiable self-defense. Then we get the "shocking twist" that he was merely a messenger to notify Helen of a small inheritance. THEN we find out at the end that the man was actually a stalker who tried to get revenge on them for their sons killing his lover. 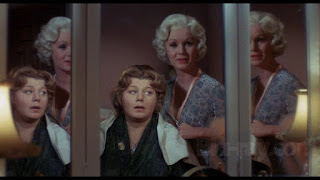 Well, which is it? It can't be both because one cancels out the other. If he was a stalker, why did he bring in a letter stating a long-lost relative had left Helen some money? If he was merely an innocent victim of Helen's paranoia, how then did the police discover he was really a vengeful potential killer. It would have simplified things to have things be one or the other. However, by trying to be all the situation just becomes unnecessarily confused.

We also do not know what happened to Hamilton Starr after he escorts Helen back inside the studio/home. Did Helen kill him too? Did he just leave? It never answers what the fate of this overtly strange man who just came in and out was.

One aspect of What's the Matter with Helen? that perhaps hasn't been commented on is how the film sticks to stereotypes. Here, we have another "crazed lesbian killer" who would rather murder someone than let her sex goddess find a man of her own. Not that "crazed Christian fanatic killer" would have been any better. Granted, the film might not have wanted to go further into the barely suppressed sexual desires Helen harbored for Adelle. However, was her increasingly intense embrace of faith a way to try and suppress her "unnatural desires" or was her orientation finding an outlet through her almost worshipful attention to Sister Alma?

What's the Matter with Helen? would have done better to embrace its camp elements or been more serious. Instead, it wanted to be a hybrid of the two, leading to not a bad film but something less than we ended up with.