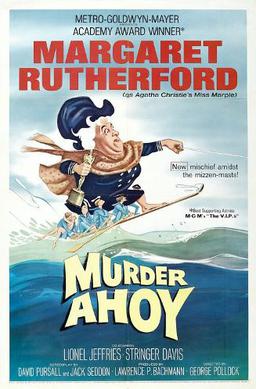 MURDER AHOY!
Murder Ahoy perhaps was one step too far for Dame Agatha Christie. The three previous Miss Marple films had at least been adapted from her novels (albeit both Murder at the Gallop and Murder Most Foul being based on Hercule Poirot novels). Now it was decided to write an original Miss Marple story with no input from Dame Agatha. The end result is a weak film, though through no fault of Dame Margaret Rutherford.
Miss Jane Marple (Rutherford) is, thanks to a relative's death, made a trustee of the Cape of Good Hope Youth Reclamation Centre. At her very first meeting, fellow trustee Cecil Ffolly-Hardwick (Henry B. Longhurst) is murdered through his snuff. Who would want him dead, and why? The answer lies on the HMS Battledore, the trust's good ship where young men are trained away from their former life of crime.
Miss Marple, dressed up in a naval uniform, soon comes aboard, much to the Battledore crew's irritation. Captain Sydney De Courcey Rhumstone (Lionel Jeffries) quips that she looks like Neptune's mother. He's more irritated when she commandeers his quarters, forcing everyone to move down based on pecking order. Soon, however, the Battledore begins revealing her secrets, ones that involve juvenile delinquents, forbidden romances, and more murders. With help on land from her Boy Friday Mr. Stringer (Stringer Davis) and Chief Inspector Craddock (Charles "Bud" Tingwell), Miss Marple soon unmasks the killer and even manages to play matchmaker. 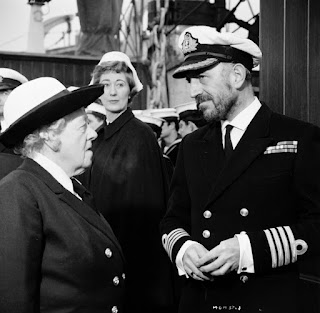 I think alarm bells should start ringing when the opening credits show the formerly sane Miss Marple strut around in naval garb and we see that Murder Ahoy is "based on their interpretation of Agatha Christie's Miss Marple" (emphasis mine). "Their" interpretation is that of screenwriters David Pursall and Jack Seddon, who had worked on the previous Miss Marple films. However, while they did well when adapting a Christie novel, it is when they got a free hand that they made a right mess of things.
Their interpretation of Miss Marple was to make her less shrewd detective and more Bonkers Betty. They forgot that Miss Marple could be funny, but not a loon. Her get-up, the almost oblivious manner to things, the manner of deaths was all set up to force humor. However, when she and the Nelson-mad Rhumstone see a body hanging from the mast both seem more confused than horrified.
I think this is because Murder Ahoy leaned far too heavily on trying to make all the characters "funny" versus merely "amusing but still rational". Jeffries bears the brunt of the forced humor, forever muttering and coming across as too dimwitted to be in charge of himself, let alone a whole ship. Rhumstone could have been a stereotypical "idiot in charge" but as played by Jeffries, Rhumstone was too stupid for even that.
You can't take seriously a naval or semi-naval officer who both wears a kimono and curls his beard openly in front of others. Not that seeing Miss Marple in a fencing contest with someone who is or is not the murderer any more serious. 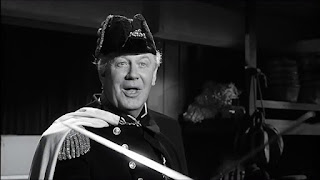 Murder Ahoy made a terrible mistake in separating Stringer and Marple. They work best together because they can play off each other, but because Stringer is on land and Marple at sea they have to communicate through Morse code sent through flashlights. I kept wondering why and how Mr. Stringer managed to stay up late enough to receive news from Miss Marple.
The film also leaves a lot of unanswered questions. What happened to the boys who were part of the criminal enterprise? Were they willing participants or forced into things? Why and how did the fictitious novel The Doom Box help the murderer plan the nefarious schemes? What is up with all the silly names?
I think Rutherford gave it her all and she is still enjoyable to watch. She was failed by the material, which gave her little to work with. Cutting off Davis from her weakened her overall performance as she now has Jeffries to play against her. He however is too overtly silly to take seriously, let alone be either the detecting protege or murderer.
I'm not throwing the baby out with the bathwater, as there is a nice quip between Craddock and Sergeant Bacon (Terence Edmond). "A tramp wants to see you urgently!" Bacon tells the Chief Inspector. Without missing a beat, Craddock replies "I don't urgently want to see a tramp!"
Murder Ahoy was the last Margaret Rutherford Miss Marple film, and it is a shame that the nice, light manner the previous films had did not carry over to this one. This last hurrah would sadly lead to a decline for dear Jane until Joan Hickson came along. It is not terrible, but it just missed what made the previous films enjoyable.
DECISION: D+
Posted by Rick at 1:59 AM