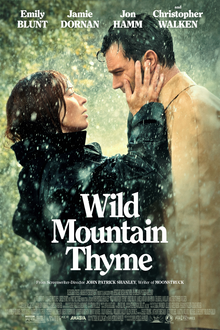 WILD MOUNTAIN THYME
For the longest time I planned to watch the Wild Mountain Thyme screener, yet for the longest time I resisted, resisted, resisted. Something just held me back from watching it. At last, however, I plunged into director John Patrick Shanley's adaptation of his play Outside Mullingar. I think my instincts proved correct yet again, as Wild Mountain Thyme is a mess, trading in stereotypes, frustrating about what it wants to be and downright nonsensical at times.
And even that I might forgive if it not for the fact that it's so unbearably boring.
With occasional narration from future dead man Tony Reilly (Christopher Walken), we learn that Irish farmers Anthony Reilly (Jaime Dornan) and his neighbor Rosemary Muldoon (Emily Blunt) appear perfect for each other. Rosemary has carried a yearning for Anthony since childhood, but Anthony is more hesitant about it. While the Reillys and Muldoons get along pretty well, there's a slight disagreement on a small strip of Reilly land that technically belongs to Rosemary, forcing them to open two gates every time Da and Son Reilly cross it.
Tony despairs about his puzzlingly shy son, so much so that he's decided to deed the farm not to Anthony but to Anthony's American cousin Adam (John Hamm). Adam may also inherit Rosemary, something that Anthony is not keen on but not making any steps to prevent. For her part, Rosemary seems equally hot and cold with the idea of the Yank coming to invade. One moment she flies to New York City for one day to get Adam to accompany her to her first ballet, the next she's all but forcing Anthony to tell her why he won't love her.
Once we learn the reason Anthony says he won't marry her, the audience that has managed to stay awake will wonder whether Anthony is literally insane or, well, that's really the only explanation. However, all's well that ends well for our White Swan Rosemary and honeybee Anthony. 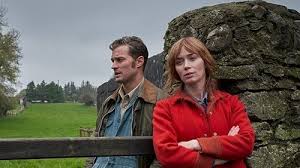 A lot of criticism has been thrown at Wild Mountain Thyme on two main points: accents and Anthony's reason for not marrying Rosemary despite having feelings for her. On the first point, the various Irish accents range from the plausible to the downright bizarre. Dornan has a bit of a leg up on Irish accents being that he is actually Irish, but his accent seems exaggerated to sound "Hollywood" Irish. The British Blunt let hers come and go, sometimes going too strong and sometimes not strong enough.
Walken, however, had nothing other than his cadence to pass off as Irish. It isn't to say that he didn't try: his farewell to Anthony is a good effort though as directed by Shanley it veers towards quiet parody. One can forgive Dornan for his performance: he is more a good-looking man who can speak. To be fair, he does look lost and confused, and I oddly became fixated on the streak of grey hair, wondering if it was real or added for character. Blunt, too did her best, wandering accent aside. However, she delivered her lines the same way Dornan did: with no sense of conviction or enthusiasm. Few people have been as mismatched as Dornan and Blunt. They look like they're almost trapped in a parallel universe, perpetually confused versus hiding deep romantic yearnings. 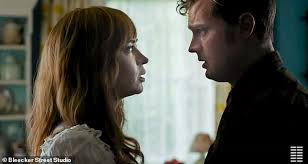 On the second point, well given Dornan's performance his oddball rationale didn't come across to me as sincere or shocking. It came across as someone just saying the first thing that came to mind to stop from admitting he was really gay, a virgin or both. It was strange on so many levels, but not on the level of infuriating or outlandish that a lot of my brethren hold it to be. It's a mix of both Shanley's limitations as writer/director and Dornan's as an actor that Anthony didn't seem to believe his own whacked-out confession. It didn't anger me or cause me to break out into giggles.
Instead, it made me think "Is he for real?" in every variation of the phrase: sarcastic, puzzled, you name it.
Wild Mountain Thyme has a lot of atmosphere, and that's another major issue. It's all too self-consciously cute, too naked an effort to be whimsical and oh-so-twee with wild tales of funny Irishmen telling tales of Anthony proposing to donkeys and Americans renting Rolls-Royces to drive to farms. The movie shifts wildly between wacky and maudlin. It also has wild leaps of logic, such as Rosemary's almost rash decision to fly to New York to see a ballet for the first time.
Because apparently going to say Dublin for such an endeavor is too far-fetched.
I think Wild Mountain Thyme tried desperately to build it up as a light Irish romantic comedy, but it ended up being so deadly dull. Curiously, if it had dropped the Irish whimsy and been a straightforward romantic drama, if it had focused more on the potential love triangle versus trying to build one up with a clearly disengaged Hamm (who probably thought how lucky he was to sound like the American he is), Wild Mountain Thyme would have been better than it was.
There is simply no buzz around Wild Mountain Thyme.
DECISION: F
Posted by Rick at 12:31 PM