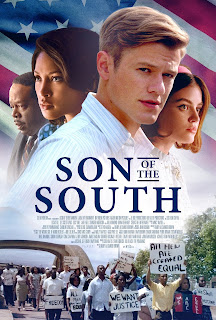 SON OF THE SOUTH

In this past year of racial tumult/reckoning, perhaps Son of the South thought it could ride as a topic film despite being set in the 1960s. A film with good intentions, Son of the South is brought down by some poor directing choices that show the lack of experience behind the camera.

Youthful Southerner Bob Zellner (Lucas Till) seems astonished that he and some friends could be asked to write a paper about race in 1950's Alabama and yet not talk to actual African-Americans. Partially out of naïveté, partially out of stubbornness, he does so anyway, down to attending a black church where Reverend Ralph Abernathy (Cedric the Entertainer) speaks and Rosa Parks (Sharonne Lanier)tells him "Not choosing is a choice".

Bob, son of a liberal Methodist pastor and grandson of a Klansman (Brian Dennehy in one of his final performances) soon goes to the "Communists" like civil rights activists Virginia Durr (Julia Ormond) and Derek Ang (Ludi Lin). Seeing the Freedom Riders beaten does get him more and more involved in the Civil Rights Movement, as does pretty black girl Joanne (Lex Scott Davis). Good thing too, as his fiancée Carol Anne (Lucy Hale) dumps him for putting the Cause over their relationship.

As Bob continues fighting the good fight down to becoming the first white secretary for the Student Nonviolent Coordinating Committee (SNCC) his life may be in danger from his virulently racists former friends and family but his "white privilege" and Southern roots keep saving him. 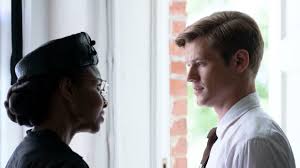 Son of the South is the second feature film from Spike Lee's longtime editor Barry Alexander Brown, who also adapted Zellner's autobiography The Wrong Side of Murder Creek. Perhaps giving directing, screenwriting and editing responsibilities to one man was a mistake, as Son of the South is rather clunky in all three areas.

As a side note, while it appears that Brown and Lee (who served as an executive producer) could not resist the temptation of the film's title nearly matching another film, The Wrong Side of Murder Creek makes in my view a better title.

The screenplay may actually be close to Zellner's memoir, but it is filled with a whole series of overwrought lines it might be almost a parody of these earnest tales of racial redemption. At the Durr's dinner the allegedly naïve Zellner remarks that America is a democracy.

"It's a republic, actually, which is what Hitler was when he rose to power", Ang replies. My notes granted may have a mistake for I figure Ang meant to say "which is what Germany was Hitler rose to power" and it may have been a reference to Nazi Germany in the dinner conversation. However, not only did this smack of the enlightened minority educating the dim Anglo on the truth but it seems the film asks viewers that they think segregationist Alabama is equal to Auschwitz.

Early on, there was an even more cringe-inducing line that showed how set Son of the South was to hammer home its message. As Bob celebrates coming of age at a bar with his friends, one offer a toast. "To Bobby: Free, White and 21!". Even if every Alabaman was a Klan member, this seems such an outlandish toast to stretch believability. It might have been real, but it just comes across as lacking in any subtlety, and Son of the South is full of such lines and scenes.

Son of the South has some surprisingly bad moments that with a more experienced director could have been impactful. In a riot between Freedom Riders and protesters we are meant to be horrified and shocked. Instead, there is such a pedestrian manner to it all it almost looks like one can see the smoke machines and Alexander telling his cast and crew not to hurt the equipment or each other. It looks amateurish on every level.

As loath as I am to compare films, compare this riot with the police assault on the Edmund Pettis Bridge marchers in Selma. In that film, the chaos was simultaneously horrifying and mesmerizing, visually splendid and shocking. Here, the riot looked like it was for a bad television special. The film bookends with an attempted lynching, but given that Zellner is narrating this attempt on his life one already loses whatever tension this opening intended. Moreover, the lynching should come across as intense and dramatic, but falls short.

The film also seems to want to make Zellner into something he never was. Yes, his Granddaddy was a Ku Klux Klan member, but his father it is overtly mentioned is a "liberal minister" who learned racism was wrong when he toured with an all-black gospel choir while traveling in the Soviet Union. The prayer offered by Zellner's daddy before going to work at SNCC talk about "taking up arms to fight for freedom and justice". In short, judging by the information Bob Zellner was not some earnest young man who was transformed and evolved to do right.

He was already there.

Alexander did his actors wrong in his directing. Lucas Till looks his age, which is a decade too old to be this twentysomething young man barely starting life. It's a curious thing that despite being a Southerner Till sounded as he was forcing the accent. Even in the moments that attempted a hint of lightness (such as when Zellner is taught to pronounce the word as "Negro" versus his Alabaman-inflected "Nigra") it feels unreal.

Davis did well when showing Joanna's education, but when told of someone's killing there doesn't seem to be a bit of emotion. To be fair though, both are extremely good-looking and make a nice couple.

It is nice to see Ormond again and she did quite well as the liberal Southerner to where one would have liked to have seen a film about her. Cedric the Entertainer had that effect too in his too-brief role as Reverend Abernathy.

Son of the South is a well-intentioned film, but it just falls short of making a case as to why anyone should care about Bob Zellner.