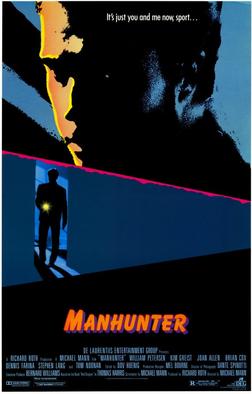 Hannibal Lecter has become an iconic figure, the embodiment of sophisticated evil. While it was The Silence of the Lambs that brought Lecter his status, many people do not realize our wicked cannibal psychiatrist made his literary and cinematic debut in another project. Manhunter, the first cinematic version of Thomas Harris' Red Dragon, has been lost in the shuffle of Lecter-related work. While it is a bit dated and more interested in style than substance, there is enough in Manhunter to make it worth a viewing.

As a side note, Manhunter opted to change the spelling from "Lecter" to "Lecktor".

The actual Tooth Fairy, after a lot of detective work, is eventually identified as socially awkward Francis Dollarhyde (Tom Noonan), who has already killed Graham's nemesis, tabloid reporter Freddy Lounds (Stephen Lang) as part of Lecktor's revenge. It's a race now to save both Graham's wife and son from Lecktor's machinations and Dollarhyde's blind coworker Rita (Joan Allen), the Tooth Fairy's next potential victim.

There is not much in Manhunter to suggest it is anything more than a B-Movie with suggestions of creepiness but not much in terms of gore. This is actually a plus in writer/director Michael Mann's adaptation, as he resists the temptation to be graphic in terms of the on-screen violence. Even the moments that suggest horror (like a scene where a tween accidentally sees crime photos) are quite restrained.

Whether this is what audiences want or not I cannot guess at, but Manhunter is not interested in the crimes themselves, let alone the gory details. Instead, it is meant as an exploration of Will Graham's tortured psyche. Perhaps that explains why Petersen is restrained and almost passive in Manhunter, displaying a man who doesn't display much.

As played by Petersen, Will Graham is a still man, one who doesn't want to let the past haunt him but which still does. I think people may find him a bit emotionalless and remote, but I think this is how the character is meant to be. As such, his general passivity works. 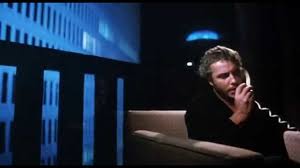 A lot of the performances in Manhunter are surprisingly quiet, stripped of grandiose manners. Up to a point this is good, but at times it seems unrealistic. Kim Greist as Will's wife Molly seems merely slightly perturbed at having to hide out with her son to avoid the dangerous Tooth Fairy. There's little to suggest anger or fear, merely inconvenience.

I think it is because Manhunter is more interested in the investigation: the forensics, the actual detective work, than it is in plunging into both the horrors of Lecktor and Dollarhyde or the psychological toll on the FBI agents. Manhunter is quite respectful of how the note from the Tooth Fairy to Lecktor is quickly investigated.

If one thinks on Manhunter, some things just seem so odd. Rita opting to make love to Dollarhyde make her look like a tramp (and despite her work, the casting of the sighted Allen would now be called "problematic"). It doesn't seem to fit, as does Lounds' harassment of Graham and his abduction.

Manhunter feels and looks like an 80's film. This isn't a slam on it, just an acknowledgment that it is a bit dated now. However, it isn't a bad film and has a nice visual style that can be appreciated.