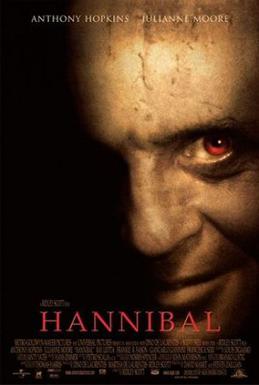 It took ten years but at long last Hannibal Lecter was able to say, "Hello, Clarice". Whether this quote, misattributed to The Silence of the Lambs, came specifically from Hannibal or was included in Hannibal due to its popularity I cannot say. Hannibal is a curious film, curious in that it adds nothing to the Hannibal Lecter mythos, a lot of style but very little substance.

Ten years after Dr. Hannibal Lecter (Anthony Hopkins) escaped American justice, he is living in Florence. His frenemy FBI Special Agent Clarice Starling (Julianne Moore) is still enduring the patronizing of men. After a botched drug bust that she is blamed for, she is contacted by Mason Verger (Gary Oldman), the only Lecter victim to survive.

Verger, a wealthy child molester who disfigured his own face while under Lecter's drug-fueled therapy, hopes to lure Lecter out of hiding to enact his revenge. This revenge plot eventually ensnares Italian detective Rinaldo Pazzi (Giancarlo Giannini), who endangers his life when he learns of the $3 million dollar reward. Despite a last-minute warning from Starling who has through her own detective work found Pazzi, he is murdered by Lecter.

Now Lecter starts his own plan to meet up with his unofficial muse, a plot that traps Verger in his own plot and gets Starling's nemesis/former lover Paul Krendler (Ray Liotta) to literally take a bite out of himself. The cat-and-mouse game ends for both Hannibal and Clarice, but not in the way one would think. 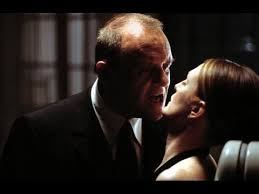 For all the talk of the gore Hannibal indulged in, I found it a surprisingly dull film. I think it has to do with how long Hannibal is: at over two hours it felt as if the wheels were just spinning until we got to the most talked-about moment. Even this infamous moment where Ray Liotta's character is fed his own brain is not as graphic as I thought it would be. Other elements, such as a flashback where Verger slashes his own face, is shot in a manner that is gruesome but not perhaps as visually horrifying as it could have been.

That isn't to say that Hannibal is restrained: in quite a few ways it seemed to be overtly sadistic with its killings, and I can see how audiences may have found it far over-the-line. However, thinking back part of me thinks "killer pigs" is hilarious than horrifying. OK, they're boars, but it still just seems such an absurd way for Verger to get revenge: by feeding Hannibal Lecter to cannibal boars.

Hannibal spends far too much time with its various subplots to where it is almost a traffic jam. There's the botched drug bust, a seemingly endless Italian subplot, the Verger subplot, all of which are supposed to connect but have a hard time doing so. It takes a full thirty minutes for Lecter to finally appear outside of a flashback, and then over an hour before he and Starling even make contact. I think screenwriters David Mamet and Steven Zaillian as well as director Ridley Scott thought they were making an arthouse horror film, but instead they made a slog.

It says quite a lot that in the opening title sequence, a flock of pigeons form to make Hannibal Lecter's face. 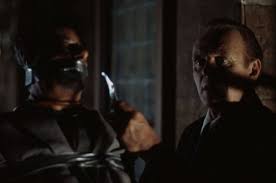 There is also a curious thing of there being absolutely no character to care about. Verger is a child molester (his claims of redemption through Christianity rather dubious). Pazzi is a greedy, almost corrupt cop. Kregler is a sexist pig who demeans Starling (as a side note, why would Starling, one of the stronger female characters, even contemplate an affair with Kregler even if it was in the past).

Oldman was going for a full-on performance, and it's to his credit that he was unrecognizable in his voice (his face wildly disfigured). Still, there seemed to be something almost hammy about his role. It's to his credit though that it was, given that everyone else in Hannibal acted all this with such stern seriousness that they came across as fully aware of how "important" all this was when one would think their characters would be more scared than somber.

Oddly, only Andrea Piedimonte as Italian officer Benetti seemed to have any sense of fun or reality into this. Actually, I take some of this back: Ray Liotta's diminishing capacity when drugged is oddly funny too.

The two lead performances are also an issue. Let's say that Julianne Moore originated the role of Clarice Starling and pretend Jodie Foster's version in The Silence of the Lambs didn't exist. Moore's Starling was not human. She was remote, cold, all business. There didn't seem to be an ounce of humanity, of vulnerability, of any emotion within her. This Clarice Starling mistook "hard" for "strong", and moreover her accent was excessively strong to where it seemed deliberately exaggerated.

Hopkins was essentially coasting through Hannibal, making Lecter almost dull. He is meant to be scary but he seems oddly more amused by the goings-on than a force of true evil.

Hannibal, I think, might disappoint some Hannibal Lecter fans. It is a poor follow-up to one of the great films, and you wonder why anyone was involved in all this. Dull, slow, slightly pretentious, Hannibal is more graphic and more boring than it should be.