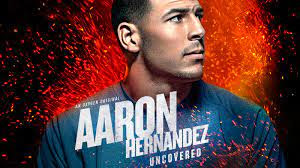 In four parts: What Started It All, On Trial for Murder, Accused Again and The Final Chapter, the documentary series takes a generally more sympathetic view of Hernandez the man. In Part One, we see Hernandez happily playing with his puppy while at the University of Florida, cheerful in the dog licking his face and mouth. We hear from Jenkins that Hernandez was "the class clown" with a bright smile. This is a Hernandez not usually seen: one with a more upbeat personality whose only real flaw is that he kept bad company.

Hernandez did have a troubled background that he brought to both the University of Florida and the New England Patriots. His father Dennis' shocking early death seemed to have killed something in Aaron himself. As he continued on in his career and life, he could not get away from the thug life that held fascination for him. In the words of one of the reporters covering the Hernandez case, he was "a thug that got lucky".

It was the lure of this thug life that ultimately brought down the NFL tight end. Despite warnings from his circle of friends such as fellow teammate Brandon Spikes, Spikes' then-girlfriend now-wife Lela Spikes and Jenkins herself, Hernandez couldn't cut off the people he'd known. That helped bring Hernandez to the horrifying crimes he was convicted and charged with. It also brought about his suicide. 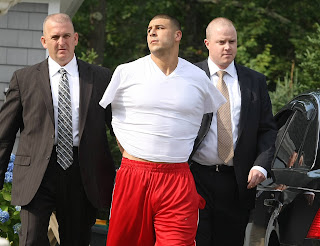 Aaron Hernandez Uncovered has Hernandez's defense attorney Jose Baez as a "consulting producer", which should at the least raise eyebrows as to whether the documentary will be more advocacy for the late tight end than truly objective. Baez remains stubborn in his insistence that the police targeted Hernandez early on due to his name, refusing to consider the two other men who were with Hernandez and the late Odin Floyd that fateful night.

This seems to be echoed by Jenkins, who also thinks Hernandez's fame put a target on his back. Jenkins has a strong dislike for Patriots owner Robert Kraft, a witness for the prosecution. Kraft testified that Hernandez told him the evidence would prove he was at a club when Floyd was murdered, leading jurors to wonder how Hernandez knew the time Floyd was killed to begin with.

Jenkins comments on Kraft's lack of loyalty after years of them going to Kraft's house and telling them how much he loved them.

It was McPhee who went on the Kirk & Callahan Show to essentially out Hernandez as gay, throwing in some double entendres about "tight ends" and "wide receivers". None show an ounce of sympathy towards Hernandez, with Callahan and Minihane particularly dismissive of how Hernandez's CTE (chronic traumatic encephalopathy) was a potential cause for Hernandez's actions. 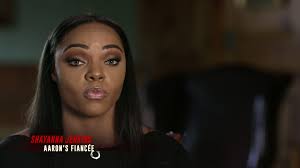 Anyone watching Aaron Hernandez Uncovered comes away with a deep respect and admiration for Shannaya Jenkins (who receives special thanks as Shayanna Jenkins-Hernandez, which struck me as odd as I thought they had never legally married). Jenkins is eloquent and dignified throughout her interview, giving us insight into her life with Hernandez and the agony of the trials. Mostly maintaining her composure, Jenkins makes a good case for her man. The Aaron she knew was a good man: loving fiancée and devoted father. He, however, was also too enthralled with people she knew better to stay away from.

The documentary gingerly avoids asking Jenkins flat-out whether she knew exactly what was in the trash Hernandez asked (or told) to throw out, or even if she perhaps suspected that in that trash was the missing gun. This again may be due to Baez's participation, but ultimately one is deeply impressed by Jenkins. She appears elegant, with a soft demeanor that belies a will of iron.

Baez's participation also makes one wonder whether Aaron Hernandez Uncovered wants to throw doubt into the various cases. Both he and fellow defense attorney George Leontire hold to Hernandez's innocence long after Hernandez's death. They may believe it, but it seems a bit odd to continue to dismiss why Hernandez kept finding himself in the wrong place at the wrong time with the wrong people.

Aaron Hernandez Uncovered gives us a better insight than some other Hernandez-related documentaries. It may be a bit more sympathetic to him given that the police appear to be the only ones to care about Odin Lloyd. However, with Shayanna Jenkins giving us her insight and little to no focus on the salacious same-sex life of Aaron Hernandez, Aaron Hernandez Uncovered is a strong series on this case. Its only real flaw is the appearance of collusion between the filmmakers and the defense. A minor point perhaps but one that didn't sit right with me.