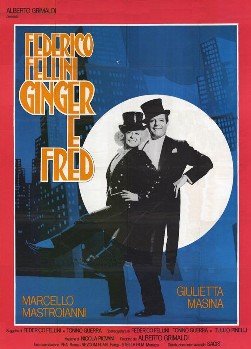 Ginger and Fred is not often remembered as part of Federico Fellini's oeuvre, probably because it is less fantastical than what he is known for. While Ginger and Fred is more grounded in reality, it still has those Felliniesque touches that the director was known for. It is also a tender, sweet story of that beautiful thing called the past.

Thirty years after their heyday as Fred Astaire and Ginger Rogers impersonators, Amelia Bonetti (Giulietta Massina) aka "Ginger" returns to Rome to appear on We Are Proud to Present..., an Italian television Christmas special spectacular. This variety show features impersonators, interviews with guests eccentric and heroic and a cavalcade of oddities from dancing midgets to a cow who has anywhere from 15 to 18 tits.

Amelia is a bit appalled by the gaudiness all around her, but she also has hopes for her reunion with Pippo Boticella aka Albert Light aka "Fred" (Marcello Mastroianni). While Amelia has moved on, married and had children since she and Pippo broke up in every way, he looks disoriented and disheveled. Pippo is also displeased by what he sees as almost obscene television, yet can't help also be fascinated by the overtly sexual nature of television: both programs and commercials.

As they prepare for their special appearance, Amelia observes the sadness behind Pippo's outward frivolity as she learns that he may not be in the best of health. Despite this an a stumble by "Fred", they are a hit. However, especially for Amelia, this was a one-night only appearance, yet as they part at the Rome train station you sense an enduring love between Ginger and Fred. 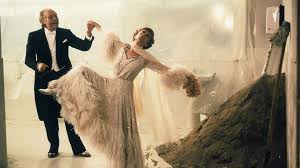 Ginger and Fred is a very sweet, tender, nostalgic story about loss. Fred looks upon the guests on We Are Proud to Present... with more contempt than enjoyment. He is displeased that they will be followed by an admiral, finding the celebration of a war appalling. Yet he makes up randy verses about the girls hawking pizza. Ginger, however, is grounded in reality. She too finds a lot of this surprisingly tawdry, but unlike Fred accepts that things have changed.

She for example is confused by a transvestite who thinks can get pregnant, but Ginger treats her with if not kindness at least respectfully. She is also proud of her work and is fully professional. She is clear on wanting to rehearse and the importance of it versus winging it. She is not one to hang on past glories, but also wants to journey at least once to the past, where Fred would sweep her in his arms.

Ginger and Fred also looks like a sly critique of Italian television and television in general. We Are Proud to Present... has a production crew thoroughly uninterested in the performers save for getting them on stage. Early on, a production assistant is clearly bored with all these "has-beens": her monotone voice, her lack of interest all make clear that for the television crew it's a job, not a calling.

We Are Proud to Present... does give Fellini a chance to show some grand visuals along with the opening Rome train station scene. You also have various characters speaking almost simultaneously. However, Fellini crafted a loving tribute to two of his best collaborators. 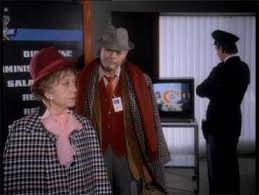 Massima is beautiful as Ginger. She crafts in her performance a woman aware of the present, reminiscent of the past but not a slave to it. She has doubts about appearing among the eccentrics to downright vulgar (among the guests on this Christmas special are a good-looking young Mafia boss and the creator of an edible underwear company who brought living models). However, Massima also makes Amelia a professional, one who is there to perform, and see her Fred one more time.

I couldn't help but wonder if when a punk rock wig is mistakenly placed on Ginger, if Fellini was making a subtle comment on how the present is tainting the past, but that's just me.

Mastroianni is equal to the task as Pippo/Fred. He shows that beneath an almost frivolous exterior is an angry man, hurt and haunted, mourning the loss of Amelia personally and professionally. We can see shades of the Continental charmer Pippo was, but also see the ill man that he is. It's never overtly stated whether Pippo is in poor health physically or mentally, but either way you see a man at the end and in his own way defiant.

Ginger and Fred may be a shadow Giulietta and Federico, a loving farewell to a time and place where grace and elegance were the norm. I found myself charmed by this sweet, simple story of old vaudevillians taking one last turn on the dance floor. More grounded than most Fellini films, Ginger and Fred is a charming story.