General Idi Amin Dada: A Self Portrait. A Review 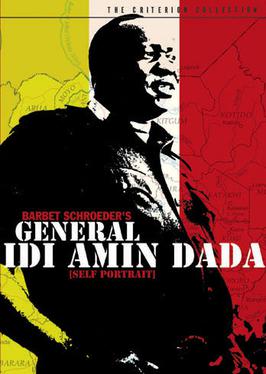 We now look at a film about an African leader, but not the all-wise, all-knowing, all-benevolent King of Wakanda from Black Panther.  Instead, it is former Ugandan dictator Idi Amin, or Idi Amin Dada, the subject of General Idi Amin Dada: A Self Portrait.  In turns bizarre and hilarious, A Self Portrait is a sight to behold, capturing a lot of Amin's eccentricity, megalomania and downright nuttiness and stupidity while hinting at the dangerous man he was.

Director Barbet Schroeder had the full cooperation of Amin, who probably figured this documentary would show our last King of Scotland in all his regal glory and make a case for his greatness.  The film, with Schroeder's narration, notes that the scenes were staged by Amin, so there was already a lot of dubiousness to the project.

Despite Amin's staged-managed manner, the end results to A Self Portrait actually reveals a great deal about Amin, though not in the way he imagined it would.  As one watches, one both marvels and laughs at the really oddball antics and thoughts of our great leader.

A Self Portrait is in many ways a comedy, because the scenarios and situations you are treated to are hilarious in their sincerity.  One of the most oddball moments is when Amin shows off his military exercises to retake the Golan Heights from Israel.

First, we see his troops training for the air drop, with said training consisting of his paratroopers sliding down a slide.  Then at the actual exercises, at most two helicopters and a smattering of troops shoot around them, with the Ugandan hills doubling for the rougher Israeli-Syrian terrain.

You can't help laugh as Amin leads his troops in this apparently sincere and grandiose plans to attack Israel.  The fact that he does not realize how this makes him look bonkers adds an extra level of weirdness to the whole enterprise.

That is, if you get past his idea that he thinks he's popular and beloved because he in his words 'always speaks truth to people' and gave freedom to all.

Over and over, A Self Portrait shows Amin in the worst possible light, thanks to Amin himself.  He openly talks about how he makes policy based on his dreams.  The opening narration points out that it was in a dream that inspired Amin to expel the Indian Ugandans, which he says were 'installed' by the British.

A Self Portrait, in its wry manner, does demonstrate that Amin may have been bonkers, but that he was also quite demonic.  He expresses fondness for the Holocaust and seems unperturbed by the massacre of Israeli athletes at the Munich Olympics.  He says he's quite willing to let the Black September terrorist group stay in Uganda, and the film notes that after he kicked the Israelis out, he gave the Palestinians the old Israeli embassy.

In a curious turn of events, two years after A Self Portrait was released, the PLO took an Air France plane and was allowed to land in Entebbe, where Amin provided refuge.  Given how Amin declared that those who flew El Al Airlines were 'not innocent' because they could have made arrangements for other airlines, we can see that Amin was indeed a threat to Israel.  Oddly, Amin says that those who flew Air France would be safer.

Amin, who was also generous enough to supply the score to A Self Portrait via his accordion playing, unwittingly shows himself to be a total buffoon, but a dangerous one.  He is aware that his Cabinet meeting is being filmed, but appears not to understand that his words and actions are being recorded.  Among his other insights are that his ministers 'should not be very weak, like a woman', then goes on to add later in an apparently unrelated part that women should run Ugandan hotels because they as women are adept at running houses.

He also suggests that he is unhappy with his current Minister of Foreign Affairs, Michael Ondoya.  Schroeder's narration, similar in tone and delivery to the film Network, points out that two weeks after the Cabinet meeting, Minister Ondoya was found floating in the Nile River.  Curiously, his replacement was Princess Bagaya, a former model. 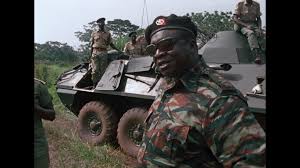 I figure His Excellency changed his mind about women being too weak to be government ministers.

Sometimes, the comedy in A Self Portrait speaks for itself.  At a specially-organized visit to a village, Amin's helicopter lands in a field so close to the villagers that the dust and wind sends the crowd fleeing for its life in obvious terror, returning soon after once the literal dust settles to cheer on the great leader.  The fact that Amin had planned this specifically for A Self Portrait and that he watched it prior to its release and was yet unaware of how foolish, even nutty it made him look, adds that surreal touch to the proceedings.

Again and again, Amin comes across as a clueless clown, whether it is his idea that The Protocols of the Elders of Zion are "recently discovered Israeli plans" that are legitimate or when he sent a letter to his rival, Tanzanian President Julius Nyerere.

"I want to assure you that I love you very much, and if you had been a woman I would have considered marrying you, although your head is full of grey hairs.  But as you are a man that possibility does not arise".

If only he'd waited until the Obergefell Decision...

Idi Amin is the anti-T'Challa: a vainglorious, clueless, dumb and potentially bonkers strongman, endued with a sense of his own mystical wisdom.  General Idi Amin Dada: A Self Portrait hints at the monster behind the mirth, and in its portrayal captures the vanity that all dictators have.

It is not known whether any Ugandans were eaten during the production.