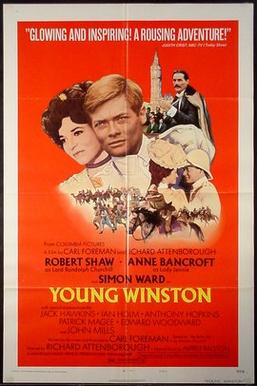 Having already covered a sliver of his life in Darkest Hour, we now turn to Young Winston, where we see the early years of our future Prime Minister/Man of Destiny.  This biopic was directed by Sir Richard Attenborough, a man who was apparently fond of biopics.  Before Gandhi, and before Chaplin, there was Young Winston, and having seen all three of these, it's clear that Sir Dickie believes life stories should make for long films.

Whether they can, under his direction, make for good films is another question.

Young Winston (Simon Ward) narrates his early years off-screen.  He remembers his early exploits in wars: India, the Sudan and the Boer War, where he was captured after helping other troops escape.  Winnie himself managed a daring escape from his Boer prison, leading to an intense manhunt.

In between those years, he remembers his school days, as well as the love his nanny Mrs. Elizabeth Everest (Pat Haywood) gave him.  The love from his nanny, whom he nicknamed 'Woomany', was the only one he ever got.  His father, Lord Randolph Churchill (Robert Shaw) was too busy being a high-up in Conservative Party politics and Member of Parliament to give Winnie or his brother Jack any real affection.  Lord Randolph was always seeing in his eldest a perpetual failure, and His Lordship was really too busy getting syphilis to care about others.

Lady Randolph, the former American beauty Jennie Jerome (Anne Bancroft), gives her children slightly more attention than her husband, but not by much.  Too busy attempting to save Lord Randolph's political career and insisting to keep her husband's indiscretions private, she eventually comes to attempt to help Winston start his own political career.

Eventually, Winston's Boer War exploits gain him a seat in Parliament, but he isn't above settling old scores or potentially making the same political mistakes that ruined Lord Randolph.  His only friend in Parliament is David Lloyd George (Anthony Hopkins), who horrors of horrors, is Liberal. 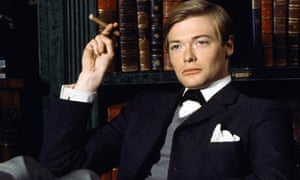 As an actor, Richard Attenborough was good to great.  As a director, Sir Dickie couldn't direct a dog to bark.

As one watches Young Winston, one gets the sense that Sir Dickie longed to be David Lean and fails constantly in his ambitious efforts.  He has big battle sequences, and some of these are actually good.  Of particular note is the cavalry charge Churchill took part in, which he helpfully notes was the last charge in British history.

It isn't thought there aren't some good bits and pieces, but they seem to be more accidental than deliberate choices.  Attenborough and his screenwriter, Carl Foreman (who adapted Sir Winston's memoir My Early Life), make what should be an exciting story shockingly dull.

The fact that Foreman earned a Best Adapted Screenplay Academy Award nomination for Young Winston is ever more astounding.

Where Sir Dickie fails is in some frightful choices.  For example, he has a plethora of voiceovers, particularly from Winston himself.  Voiceovers are already bad enough, but Sir Dickie does not give us any context as to why they are there.  Perhaps if the film had set up where Winston is remembering or being interviewed, at least there would be a reason for the voiceover from him.  The fact that they just are makes it lazy writing.

Even more bizarre, Foreman's script gives us two faux-interviews where an unseen voice is 'interviewing' both Lady Randolph and Young Winston, ostensibly for a newspaper article.  The reason for these 'interviews' is simple: information dumps for the audience.  Why not actually show the interviewer, or go another route and make it a genuine conversation?  Even worse, for these type of 'interviews', we have one voice flat-out stating to Lady Randolph that she knew of her husband's syphilis and that she was some kind of 'merry widow', cavorting with an Italian count.

It's downright insulting to both the characters and the audience to have this type of information presentation with no context.  Compounding the horror and ineptness of writer and director is how one major battle just stops to have Young Winston have his own interview. 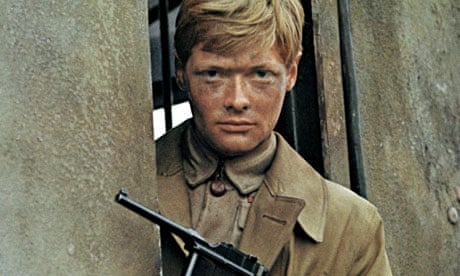 Worse still, Young Winston introduces elements that are never touched on again.  We see one scene where Winnie is courting the beautiful Pamela (Jane Seymour in a silent role), but we don't hear from or see her again.  A brief mention is given before he sees the love of his life, Clementine.

It's almost maddening how Attenborough and Foreman manage to make a mess out of the early years of a titan of history.

Time and time again, Sir Dickie cannot find the heart of his figures; in a bit of foreshadowing, this is a problem that plagues his other vaunted biopics.  Churchill, and later on the Mahatma and Charles Chaplin, all are still rather vague figures, men who were important but who still end up opaque.  Their drives and motivations and most importantly their complexities are left off, where we are given these stone figures to admire and revere.

Given Sir Dickie's manner in Young Winston, Gandhi and Chaplin (at least my memories of the last two), Attenborough simply could never go beyond the surface of these historic men.  They all had little actual personalities: essentially each had one quality or personality type, but were never contradictory, complex or prone to errors.

The only actual qualities in Young Winston and the only things that make the film tolerable are the performances.  I credit the acting more to the actors than anything with Attenborough.  Simon Ward was absolutely perfect as Young Winston.  He does not just have the looks of a young Churchill but the voice.  Ward provides the voiceover of the older Churchill, and his does not come across as imitation.  It is when he is young that Ward looks and sounds like a young Winston.  It never comes across as an impersonation but an actual performance.

Of particular note is when we see Winston: Man of Action, especially when he has a Not-So-Great Escape from the Boer prison or earlier when he is working frantically to help the British soldiers escape a Boer attack.  Ward is commanding and powerful here, giving a type of performance that you could sense men would rally behind this figure.

A good performance also came from Shaw as Lord Randolph, who could never find anything good in his son.  His final major scene, of him attempting to give a speech in Parliament as his mind begins its descent into the effects of his syphilis, is moving and a rare bright spot in Young Winston.  Bancroft's role was wildly unwritten and bless her heart for doing what she could with such a bad script and directing.

The acting, particularly Simon Ward in the lead, is the only thing that saves Young Winston from being a nightmare to endure.

Young Winston does what future Lord Attenborough films do: suck the life out of fascinating historic figures.  A whole film could be made out of Churchill's Boer War experiences, especially his escape from prison and flight to freedom.  How anyone could make this particular episode in the adventurous life of the future savior of democracy downright boring is almost impossible to imagine.