In the short running time of Black Girl, Senegalese director Ousmane Sembene does a more succinct job of examining the effects of colonialism and racism than most films twice Black Girl's length.  Black Girl is unique in that it is from the African perspective, a portrait of someone who knows firsthand the darkness of even the most benevolent outsider.

Based on Sembene's own short story, Black Girl is about Diouana (Mbissine Therese Diop), a woman from Dakar who comes to southern France to work for Madame (Anne-Marie Jelink) and Monsieur (Robert Fontaine).  The film flashes back repeatedly to Diouana's life in Senegal and the present day.  She had worked for Madame and Monsieur in Dakar when they were stationed there, and Diouana had been happy to work as the family nanny.  She was so grateful to them that she bought them a gift: a traditional African mask.  Diouana also had an off-again, on-again boyfriend (Momar Nar Sene), who was not thrilled to hear her deciding to accept the offer to move to France.

However, once Diouana arrives in France, Madame treats her with total contempt.  She is expected to be housekeeper, cook, servant and even sex object (one of the dinner guests boldly kisses Diouana on the cheeks against her will, exclaiming that he'd never kissed 'a Negress' before).  The children are temporarily gone, but once they come Diouana expects that burden will fall on her too.  Making things worse, Diouana is never allowed to venture to see any sights on her own, unless you count the butcher's.  A virtual slave and prisoner, Diouana can only look out into the darkness of the Riviera.

At long last, Diouana stands up for herself and makes clear she will not be mistreated.  She takes the mask and at first it appears she will leave to return to Senegal.  In a shocking twist, Diouana slits her throat in the bathtub.  Madame and Monsieur are not broken up over this, at least Madame does not appear to be.  Monsieur returns to Dakar, bringing Diouana's suitcase and mask to her family.  His offer of money is rejected by Diouana's mother, and as Monsieur leaves, a little boy pursues him, wearing the African mask, a reminder that try as he might, Monsieur cannot escape the ghosts of his (and European) mismanagement in African affairs. 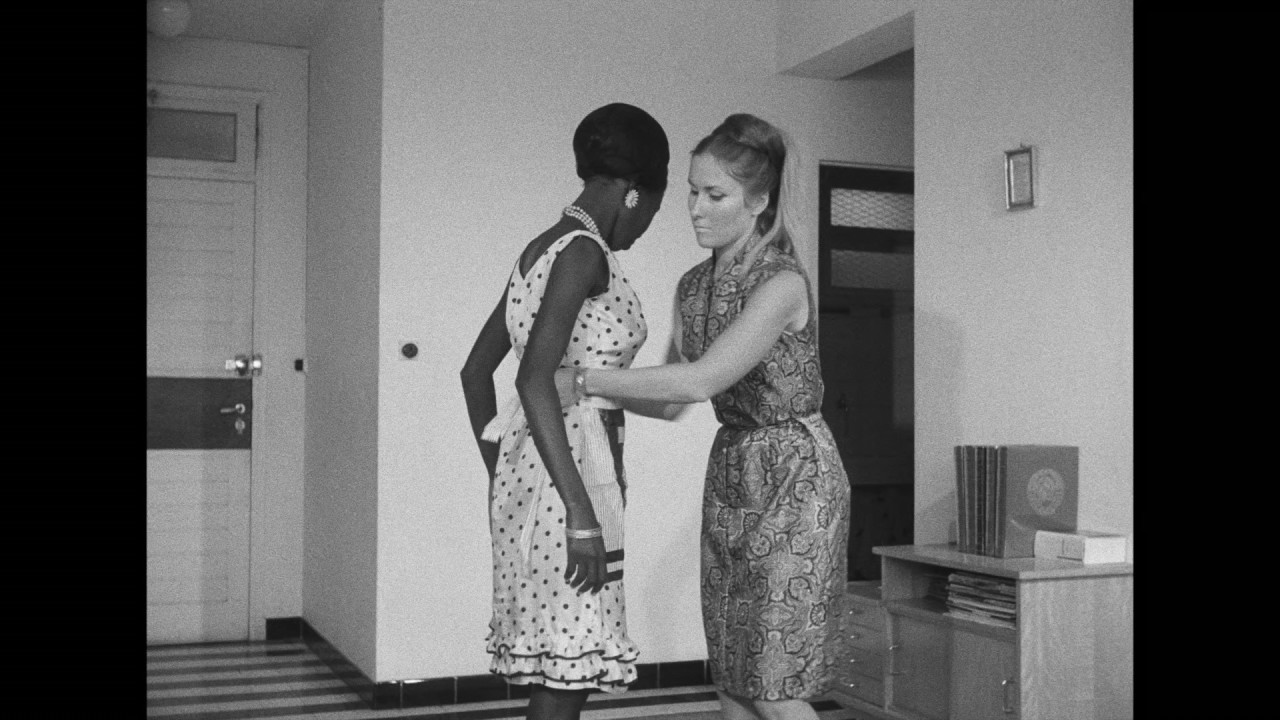 Black Girl is a bit of a misnomer.  The actual title, La Noire de..., is more in a possessive form: The Black Female Of..., versus what 'black girl' would be in French (Fille Noire).  The title of 'The Black Female/Girl Of...', to my mind, is more indicative of what Sembene meant: to state that Diouana was, in the eyes of the unnamed Madame et Monsieur, a possession, who was not 'one of us'.   This view of casual and overt racism is held by the dinner guests, who comment on Diouana's rice that 'Africans all eat rice', as if the meal was Diouana's idea versus Madame's orders.  We also hear how one off-camera comments that 'the natives' lost something of a quality after independence.

For me, the best example of the racism Diouana has to face is when Madame says with regards to her, "I'm responsible for her," the subtext I read that of 'benevolent imperialism', as if Diouana had no mind, will or say of her own.  Not once did Madame ever ask Diouana about what she might have wanted, nor even when she would have a day off.

Sembene was wise in showing us Diouana's life in Dakar as well as in France, to show that while Madame and Monsieur were not monsters in Dakar to her, they weren't angels there and devils in France.  Their personalities did not change, only the extreme level of it.

Diop, in her film debut, was elegant and beautiful as Diouana, who mixes genuine puzzlement over Madame's behavior in France with a growing awareness of her anger.  She is also delightful in her Dakar scenes, where that sense of hope and optimism comes through when she is selected to work for Madame or on the thought of her going to France.  Her inexperience comes through at times in a somewhat detached manner, but for the film it works.

Jenilek was appropriately monstrous as Madame, constantly snapping at at one point striking Diouana, while Fontaine made Monsieur more a passive bystander, someone not overtly cruel but also not willing to help much.  Even when he sees that their actions led to Diouana's death, he seems genuinely puzzled as to why the offering for a large amount of francs does not placate either Diouana or her mother.

Generally, I dislike voice-overs but in Black Girl, I find that it works quite well.

I think the budget and relative inexperience of cast and crew come through in Black Girl.  There is not much movement in the film, the settings pretty set. The acting at times appears is more stiff than perhaps it should be.  However, Black Girl is a striking film, intelligent in how it shows the damage the imperial manner of outsiders has been to Africa and Africans.  It's summed up best by the final scene of the little boy in the mask, virtually chasing Monsieur out.

The ghost of both Diouana and Africa will haunt the Europeans, the film virtually says, a ghost that will not rest and will pursue them continuously.  Black Girl's message of how racism and colonialism has done immeasurable harm is one that is worth hearing and watching.