The Librarians: And the Hidden Sanctuary Review 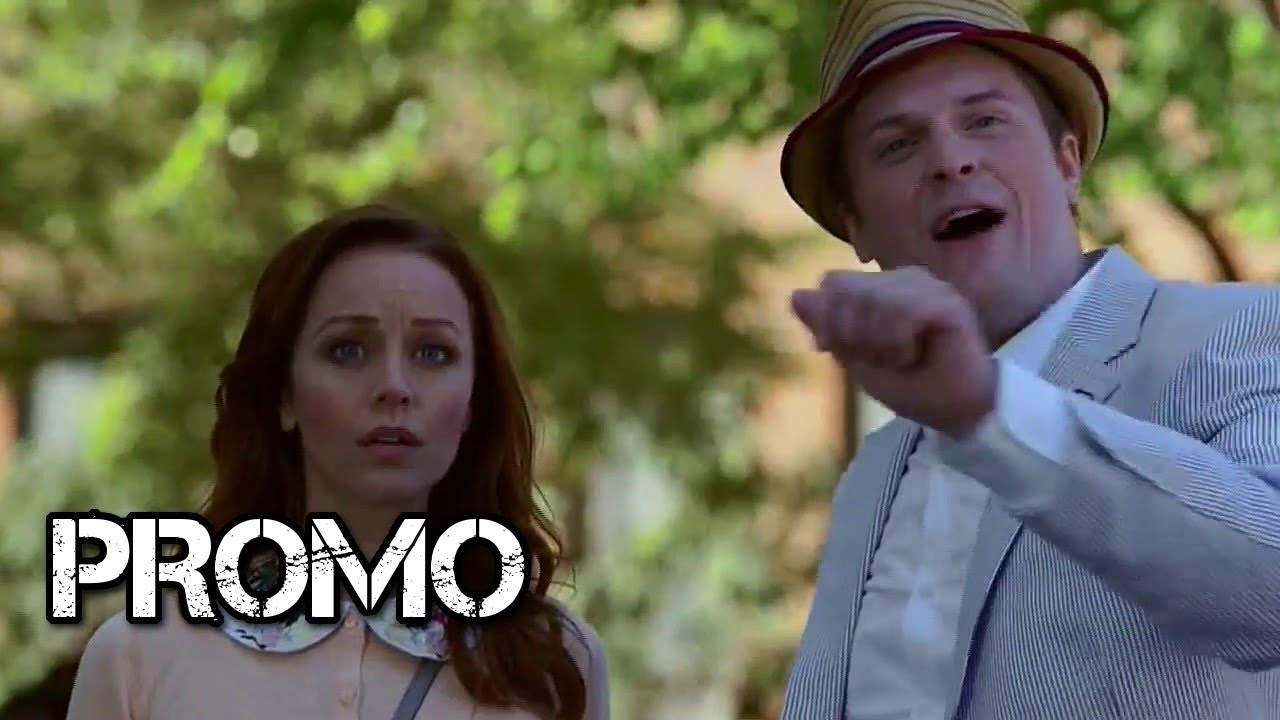 THE LIBRARIANS: AND THE
HIDDEN SANCTUARY

And the Hidden Sanctuary, while not a return to form to the zippy, madcap fun of previous Librarians episodes, is a step in the right direction.  I cannot say that I was overwhelmed with it, and up to a point I was finding things hard to believe, even here.  However, given what we have gone through, And the Hidden Sanctuary worked far better, even if I would say it was a bit rushed.

This is a Cassandra Cillian-centered episode, as most of the other Librarians barely made an appearance.  Cassandra (Lindy Booth) had a crisis of confidence in a previous mission, and she froze, leaving the other Librarians in danger.  After the trauma and aftereffects of her panic and inaction, Cassandra decides to leave the Library, not permanently but on a sabbatical.  As such, she goes to Havenport, Ohio, a city billed as 'the safest city in America'.

Havenport is more than safe: it is about to celebrate 10,000 days without a single accident of any kind.  We're not talking just car accidents or construction mishaps.  We're talking people not getting broken legs or even falling down stairs.  Havenport, OH is beyond idyllic, and Cassandra could not be more pleased.

She finds room and board with Karla (Sheri Saum) and her son, Freddie (Benjamin Flores, Jr.), whose only real interest is apparently photography.  The city is overseen by Councilman Weeks (Heath Koerschgen), who is getting things ready for a major festival celebrating their 10,000 Accident-Free Days.

As a side note, does anyone else thinks Havenport should have hired 10,000 Maniacs to perform, or is that just me?

Weeks is also smitten with Karla and probably vice-versa, but they cannot say it.  Cassandra, for her part, finds Havenport all the more wonderful, fitting her generally cheery outlook.  She in quick order becomes an actual public librarian, starting a STEM Program and joining the Quilting Bee, the Bake-Off, and other civic activities. 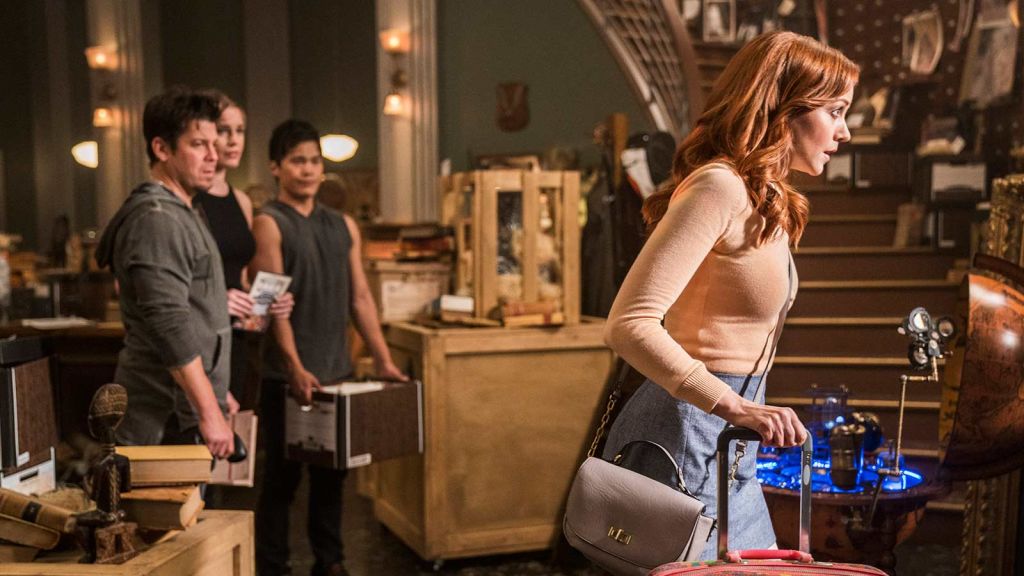 However, there is something wicked afoot.  On the verge of celebrating the 10,000 Days, these maniacs are suddenly flooded with disasters in quick succession.  Moreover, Cassandra, with Freddie's aid, sees that it is statistically impossible for Havenport to have remained so secure.  There is something unnatural in having close to 30 years without anything bad happening.

As the citizens demand answers, they soon blame the newcomer for bringing this upon them.  However, Freddie and Cassandra find the truth: Weeks had helped a fairy as a child when he was lost.  The fairy as reward would grant Weeks a wish.  His first wish of saving his father was impossible as Mr. Weeks was about to die, so Weeks wishes that there be no more accidents...and that's what he got.  He also put her in a snow-globe, and had essentially trapped her there.  Now, the angry fairy was wreaking havoc.

It's the same as when Cassandra freaked out, but words of wisdom from a vision of Jenkins (John Larroquette) give her enough confidence to restore order and outwit the fairy.  As Freddie had saved the fairy earlier during the first part of the rampage, the fairy is bound to grant him a wish.  He wishes that she know fear too, and it weakens her enough to stop her revenge.

As Cassandra returns to the Library, she notes that Freddie may get a call from them when he grows up and that the townsfolk have to accept risk.  The risks could be anything from looking both sides before crossing the street, to the risk of Councilman Weeks finally approaching Karla for coffee. 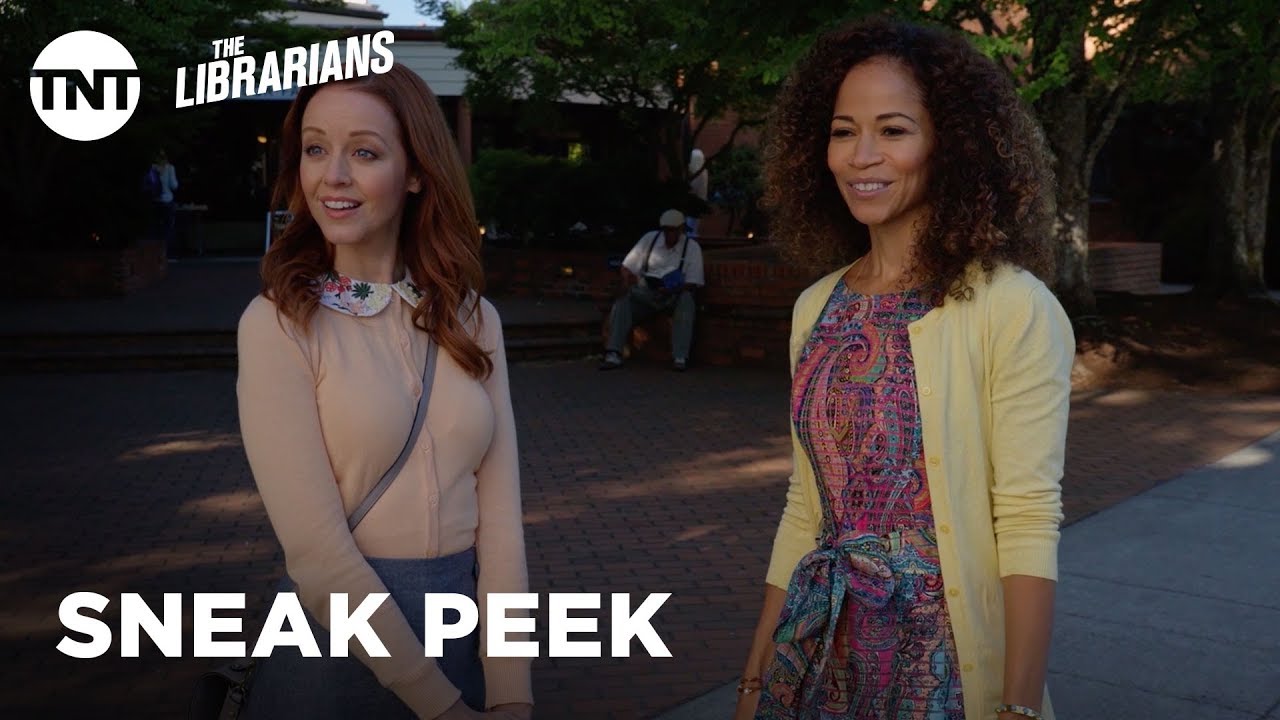 Yes, it is implausible that Cassandra could so quickly integrate into town in the short amount of time she is there, down to winning the blue ribbon at the baking contest and joining a quilting bee while getting to be a major citizen.  However, you kind of roll with it because it is not meant to be too serious.  I would also say that after so many missions where she proved herself confident, to have her now suddenly collapse is also slightly implausible.

I would have preferred that she just take a vacation because she felt she needed one, or maybe visit her friend Karla, who found an ideal place to raise her son.

Maybe it's just me, but And the Hidden Sanctuary could be a story about how life is full of risks and that you cannot be perpetually safe from any, physical or emotional.  During the tense meeting, one of the citizens calls out, 'we need to be protected', but as Cassandra observes/learns, there is no such thing as a risk-free life.  This version of 'stranger danger' does not just come in the form of external fears, but internal ones too.  Karla, for example, constantly frets about her son, worrying both about his physical and emotional safety.  She is unwittingly stunting him in an effort to protect him, and the moral of And the Hidden Sanctuary is that life without risks or without a sense of danger is no life at all.

As a side note, it's interesting that Jenkins calls her 'Cassandra' rather than the usual 'Miss Cillian'.  Is there something there, especially since Jenkins is mortal now?

This is a showcase for Booth and the director, Noah Wyle, and both did so well.  Booth was charming and sweet and highly intelligent as Cassandra, and she brought not just those qualities to her performance, but also that vulnerability and acceptance of fear as part of life.  Wyle also kept things going quickly, though the montage of disasters in Havenport did not go over as well as they could have.  I also thought Flores was weak as Freddie, more whiny than intelligent.

Still, And the Hidden Sanctuary was cute, slightly whimsical but with a sense of both danger and acceptance.  It was nice to see Lindy Booth more than hold her own, but it had the negative of sidelining the others save Larroquette to virtual cameos.

Sometimes, you can't give them what they want...

Next Episode: And A Town Called Feud
Posted by Rick at 4:03 PM