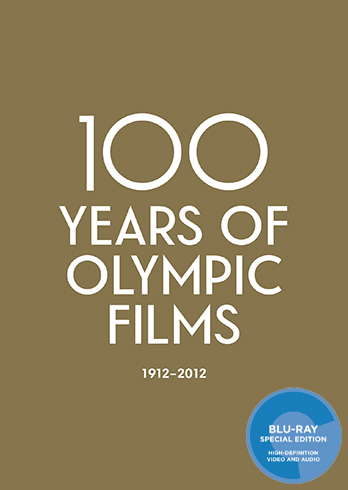 From Stockholm in 1912 to London in 2012, with sadly an interim in 1916 and between 1940-1944 due to World Wars I and II, the Olympic Summer and Winter Games have been chronicled on film.  The Criterion Collection has now released a massive box set: 100 Years of Olympic Films: 1912-2012, collecting various films on the Games.

Sometimes the films have been remarkably short: the film of the first Winter Games in 1924 Chamonix is a mere 37 minutes long.  Some are shockingly long: Bud Greenspan's first Olympic film for the 1984 Los Angeles Games, 16 Days of Glory, clocks in at an astonishing 284 minutes (4 hours, 44 minutes).

Some of these films are quite controversial.  The 1936 Berlin Games films, Olympia: Parts One and Two by Leni Riefenstahl, are extremely innovative in the use of the camera.  In fact, the techniques Riefenstahl created are still used today.  However, they are tainted by their association with the Nazi regime.  I was surprised to learn that the film for the 1972 Munich Games, Visions of Eight, barely even touched on the murder of the Israeli team by Palestinian terrorists.

However, another Olympic film, Tokyo Olympiad, is held as one of the Great Films.  It had been previously released on Criterion, but that film is now out-of-print independent of 100 Years of Olympic Films.

I have tasked myself to watch them all.  It will take a long time to get through the entire box set.  I see it as a fascinating adventure, to look in how in the course of a century, both the Games and coverage of them have changed.

The Olympic Games have held moments of greatness and tragedy, to quote the old line from ABC's Wide World of Sports, 'the thrill of victory, and the agony of defeat'.  Some of the films in this collection chronicle the great athletic achievements of the century.

I look forward to this newest venture.

First Olympic Film: The Games of the V Olympiad Stockholm, 1912
Posted by Rick at 4:10 AM