THE GAMES OF THE V OLYMPIAD STOCKHOLM, 1912

It is a fascinating thing to see how much filmmaking and sports has changed in a century.  The Games of the V Olympiad Stockholm, 1912 gives us a glimpse into a now-vanished world, one that seems downright amusing at times.

Who knew that tug-of-war was once an Olympic event?

Culled from newsreel footage shot originally shot by a Swedish company, The Games of the V Olympiad covers many events in a remarkably standard silent film format, the camera not moving and merely recording the events.

Divided into four main parts: Official Opening of Olympic Stadium by HRH King Gustav V, Events Before the Games Began, Olympic Week, and Riding, Rowing and Sailing, the overall film is a restoration of newsreels that were probably not meant to be seen as one whole.  This would explain why the running time lasts close to three hours despite having only two-thirds of all the newsreels having survived.

The choir concert that was teased when we see the parade that was taking the various choirs to their event may be among the lost films.

One of the curiosities now is the tug-of-war between the British and the Swedish.  The idea that a game usually played by children was once something that could get one an Olympic gold medal is almost sweet.  However, as tempting as it might be to almost mock how sports was played a century ago, The Games of the V Olympiad were still built on athleticism.

During the marathon, we see the winner (South Africa's Ken McArthur), clearly exhausted, slightly stumbling and requiring men to hold him up on either side when being filmed for a formal pose.  We also see the women's diving taking place in the outdoors during a rainstorm.

We also see some extraordinary moments that are now unthinkable but at the time were quite natural.  There's for example a high jumper wearing a hat.  The Russian Empire gymnastic display looked more like a ballet performed for an Opening Ceremonies.  The title cards during that marathon inform us that at the turn, runners stopped for water, lemonade, and tea. 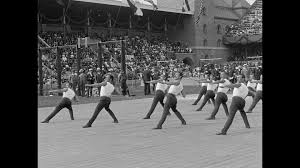 The Games of the V Olympiad chronicle a surprisingly casual Games that had some famous participants. Among the competitors were future legends Jim Thorpe, Duke Kahanamoku, and then civilian George Patton.

It was also the first time that an Asian nation participated in the Games with Japan joining the competitions.  Some of the details are surprisingly endearing, such as seeing the Canadian team with Maple Leafs on their shirts.

The Olympic Games were more relaxed and less cutthroat then, with none of the formality and strictness we have now.  It's almost as people did not take them that seriously in 1912.

The Parade of Nations, for example, while impressive had a very curious element in that the nations had no uniform language.  The Belgian team's sign read 'Belgique', while the Chilean team's read 'Chilenos' and the Greek's read 'Hellas'.

It looked as if the Olympics were still getting their act together.

We can see the more relaxed nature of the Stockholm Games and of society at the time when the Royal Family went to officially open the Games.  As the monarch and his family paraded through the streets, we see the streets generally open as the carriages pass by, with bicycles and pedestrians able to weave past and around and with a modicum of security.  We also see that athletes did not just get medals, but cups and even busts offered by various monarchical houses. 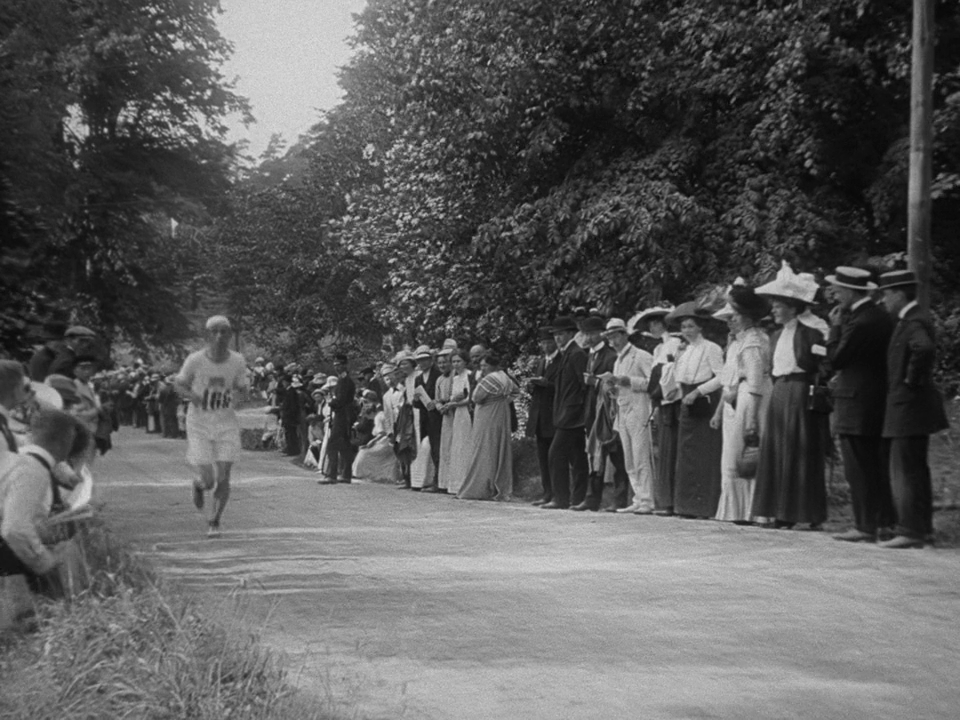 For the most part, The Games of the V Olympiad is more interesting as a historic document to a time where the Olympics seemed a jollier, more convivial affair.  It looked like everyone participating: athletes, spectators even Sweden's King Gustav V seemed to be having fun.

His Majesty's method of essentially slapping on the laurel crowns on the male winners proves quite amusing.

The jolly nature of the Stockholm Games is evident when we see people photographed for the film cameras. While most stand still as if posing for still pictures, we see that our ancestors could be just as cheeky then as we are now.

One member of the American Clay Pigeon shooting team blew the camera a kiss.  The French relay team was having a lot of laughs, culminating with one of them pushing the others in a domino fashion.

There was even an early example of photo-bombing when we are introduced to three émigrés from Ireland who competed for other nations.  As South Africa's McArthur and the United States' Ralph Rose & Pat McDonald look on and converse, we see a man behind them smiling and waving his straw hat behind them, with none of them aware of the hijinks going on.

The most impressive thing about The Games of the V Olympiad is the clear picture and sharp quality of the print.  The restoration of the various films to create this long film is among the best I have ever seen.  It is a wildly impressive restoration, with the images so clear and focused it almost looks as if it were shot today versus over a century ago. 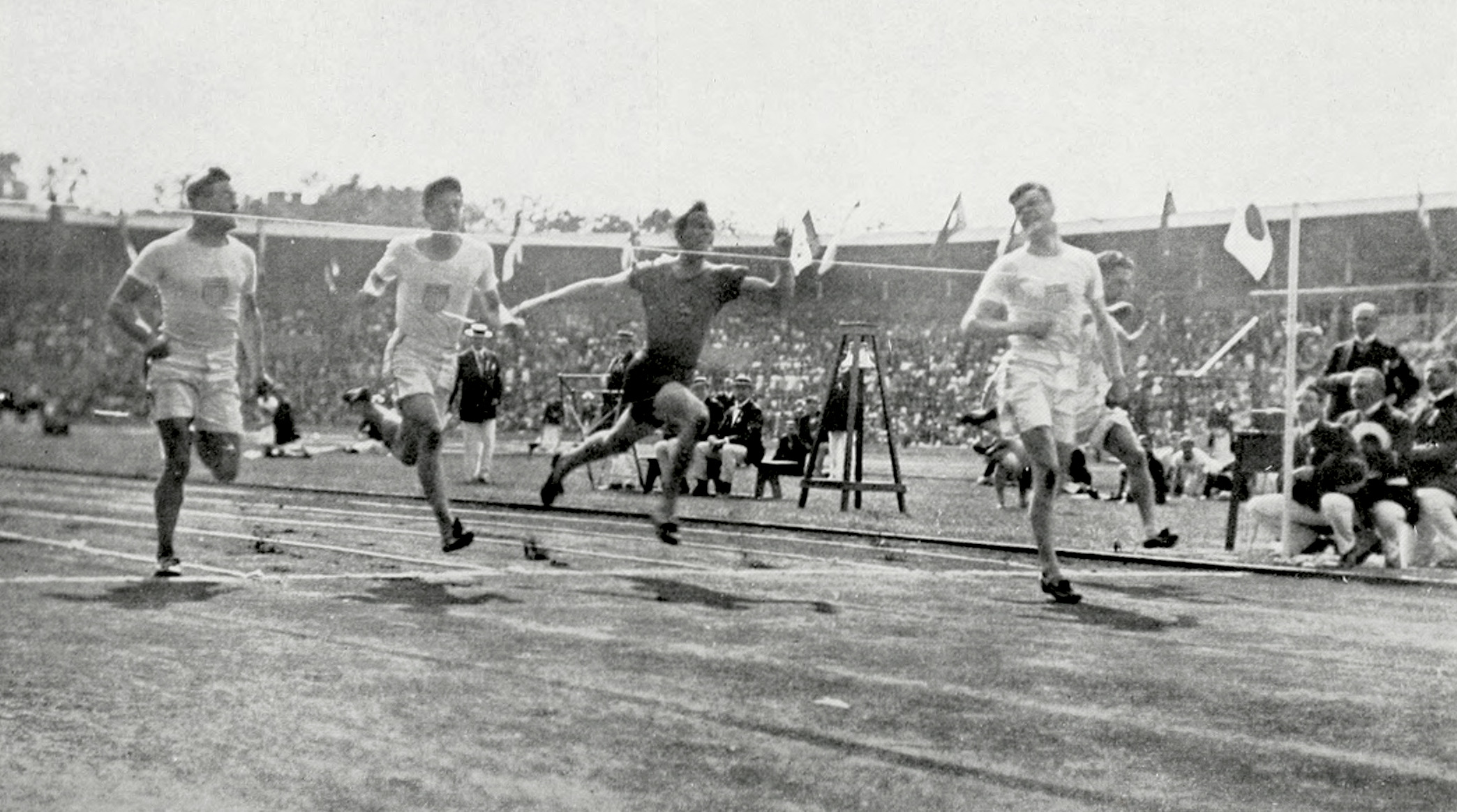 If there are any flaws, is that as the title cards give us names of the athletes, they almost never indicate who is whom.  The Donald Sosin score gives the film a silent film feel with a primarily piano-driven score, apart from a few moments where more instruments are used when the Royal House is shown. This at times can feel monotonous, especially since at nearly three hours it can almost lull you to sleep.

Seeing everything from a heavyset Rose win in the shot put to other winners such as Sweden's own Bror Fock (a name to be played with), the film is a record of a world before the horrors of World War I swept away that sense of joy and optimism, where the Olympic Games could be something to enjoy as both fan and participant.

As a document of this long-ago event barely remembered except by hard-core sports/Olympics enthusiasts, The Games of the V Olympiad is more a time capsule of a time when women and men wore much more demure bathing costumes and women played tennis in dresses and hats.  It should be of great interest to those who love both sports and history, and the restoration work on it is nothing short of spectacular.