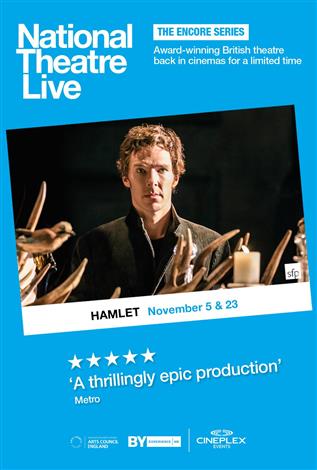 Benedict Cumberbatch was the big draw for the newest production of Hamlet, primarily due to the squeeling Sherlock fans who find him so scrumptious.  If I were asked to rank the Great Sherlocks, Cumberbatch would probably come in 5th Place, after Jeremy Brett, Basil Rathbone, Vasily Livanov, and Cumberbatch's Frankenstein costar, Jonny Lee Miller.

When it comes to ranking the Great Hamlets, I am pleased to report that despite his enormous talent, Cumberbatch will never outdo Olivier, Burton, Gielgud or Branagh. At this point, I think he might not even outrank Mel Gibson.

Prince Hamlet of Denmark (Cumberbatch) is highly distressed that his mother Gertrude (Anastasia Hille) has quickly married her brother-in-law Claudius (Ciaran Hinds) shortly after the death of Hamlet's father.  He hears from his friend Horatio (Leo Bill) that guards have seen a specter about Elsinore, and this is discovered to be The Ghost of Hamlet's Father (Karl Johnson).  The Ghost tells Hamlet that he was murdered by Claudius and tasks him to avenge him.

Hamlet feigns insanity, but this takes a bad effect on Hamlet's love interest, Ophelia (Sian Brooke), who finds herself both repelled and confused by Hamlet's contradictory manner.  Her father, Polonius (Jim Norton) and brother Laertes (Kobla Holbrooke-Smith) warn her against Hamlet, but she is a woman in love.  Polonius performs an informal examination of Prince Hamlet and despite his general idiocy surmises that there is method in his madness.

Hamlet's 'insanity' continues, but there is method in it with the arrival of the Players, whom he gets to perform a play that recreates King Hamlet's murder.  Claudius rises in shock and anger, and the Court is in chaos. Gertrude summons Hamlet to her chamber where he reprimands her, then hearing someone behind the curtains, stabs the spy believing it is Claudius.  Instead, it is poor Polonius, and Hamlet is shocked both at this and at The Ghost coming to him again, making Gertrude's innocence clear.

By now, Ophelia is, unlike Hamlet, genuinely bonkers, and she drowns.  Claudius' plan to have Hamlet killed when he is sent to England fails, and Hamlet is now back in Denmark.  So too is Laertes, screaming for vengeance.  Laertes and Claudius cook up a scheme to kill Hamlet in an arranged fencing match, which comes after Hamlet and Horatio have come across Ophelia's burial.  The merriment and philosophy that Hamlet had with the Gravedigger comes to an end at Ophelia's burial, and now the plot thickens.

Sadly, everything goes disastrously wrong.  Gertrude drinks from the poisoned chalice, Laertes nicks Hamlet with the poisoned rapier but in the confusion over Gertrude, Hamlet stabs Laertes with his own weapon, then stabs Claudius with it, ensuring they all die.  At the end, Fortinbras (Sergo Vares), Prince of Norway, arrives on this unhappy scene.

I have to admit I'm pretty much a traditionalist when it comes to Shakespearean adaptations.  That isn't to mean I oppose updating the time of a Shakespeare play or that it cannot work.  A nice example is 10 Things I Hate About You, which managed to make The Taming of the Shrew both contemporary and less troublesome for today's audiences.

As a side note, has anyone ever opted to update The Merchant of Venice to Fascist Italy?

As such, I wonder about director Lyndsey Turner's decision to make Hamlet take place somewhere in time.  It's a bit hard to gauge exactly when, for while I'm tempted to say it takes place today some of the elements make it look more like post-World War II.  We start Hamlet with our Dour Dane listening to Nat King Cole's Nature Boy, and the Gravedigger sings All of Me as he tosses bones out to make way for Ophelia.

Part of me 'gets' what Turner was saying when she included Nature Boy to apply it to Hamlet: to speak of many things, fools and kings (of which Hamlet and Claudius were), and how Hamlet may be this 'strange enchanted boy'.  I can even see the dark, wry humor of All of Me with the Gravedigger, for those dead won't use them.

Part of me does not take kindly to ramming elements that were not intended for one work and apply it to another. It's not a deal-breaker, but part of me thinks this is a case of trying to be too clever.  It's not something I won't protest but something I'm a bit leery about.

For me, however, the oddest decision was to make Hamlet's faux-insanity almost comical.  To show how bonkers our Prince of Denmark was, we had dress up like a toy soldier and bang on his drum, then play in a toy fort with more large-sized toy soldiers.  Perhaps it is because all my visions of Hamlet involved his madness to be threatening, not laughable.  Yes, there is humor in Hamlet, such as when Hamlet is telling Polonius off, but I was surprised at how funny Hamlet was made to be.

One aspect that may have worked both for and against Hamlet was the production design.  Certainly the set was massive, almost overpowering the performers.  It was so large that after the intermission, the set doubled as both the graveyard and Elsinore.  There were big moments, beautiful moments, such as when Claudius sends Hamlet off to what he hopes is his death: a massive burst of wind seems to echo Claudius' rage and plot, with the thundering drumbeats echoing it.

However, because of the massiveness of it all, the stage set for the Players doubles as the curtains for Polonius, which took me slightly out of things as I could not suspend disbelief enough to see it as the Players' set, not Gertrude's curtains.

In terms of performances, I was surprised at how Cumberbatch, despite being the title character, was actually outdone by just about everyone else.  Of particular note is Hinds, who is the most sympathetic Claudius I've ever seen.  I spent most of the play on his side, versus Hamlet, and I'm not sure that was Shakespeare's intent.  Norton's Polonius too was wonderful, his daffy, daft manner a delight.  In the dual role of The Ghost and The Gravedigger, Johnson was powerful and comedic, a credit to his talents.

I could not get a true handle on Gertrude, for Hille was to my mind not well-directed, making the Queen of Denmark almost a non-entity. Same for Brooke's Ophelia, who struck me more as a simpleton than a young girl in the confusion of love brought down to insanity.

As much grief as some productions get for cutting out Rosencrantz and Guildenstern, I don't think they added much here, though Matthew Steer and Rudi Dharmalingam were good in their roles. 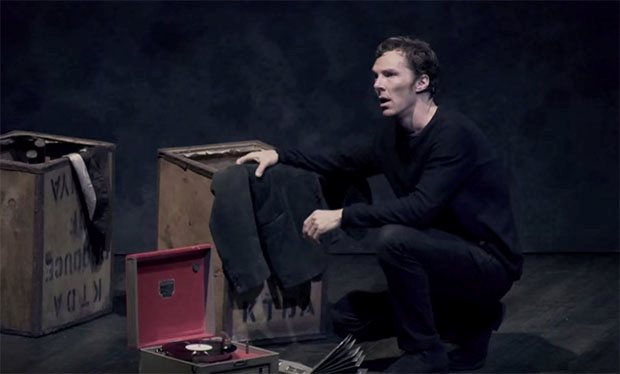 As for Prince Hamlet himself, I was surprised at how different Cumberbatch's voice was.  I didn't hear the resonant baritone of Sherlock or Dr. Strange, but a higher voice, one that spoke the words well.

For me though, there was something missing.  I could not see the inner conflict, the vacillation, the agony within.  I note when he dismissed Ophelia with a command to 'get thee to a nunnery'.  His delivery of this scene did not communicate whether he had genuine anger at the world or any sense of pain at having to make her, the woman he loved, an innocent victim of his overall plan to take down his wicked uncle.

At times he seemed more petulant than melancholy, and while I can give some leeway when he looks on Claudius' reaction to the Players, I cannot quite get the idea that Cumberbatch is a definitive or even memorable Hamlet.

If anything pushes Hamlet down, it is the massiveness of it all, in its efforts to be truly cinematic and give audiences bang for its buck.  It was not a bad go, but I could not get as involved with it as I have with others.  It might also be my reluctance to embrace a contemporary version of Shakespeare; why Horatio had to have all those tattoos on his arms and neck, or almost always look as if he were coming or going to a hostel I don't know (unless he was getting ready to play Chester Bennington in a biopic).

Again, not horrible, but not wonderful.